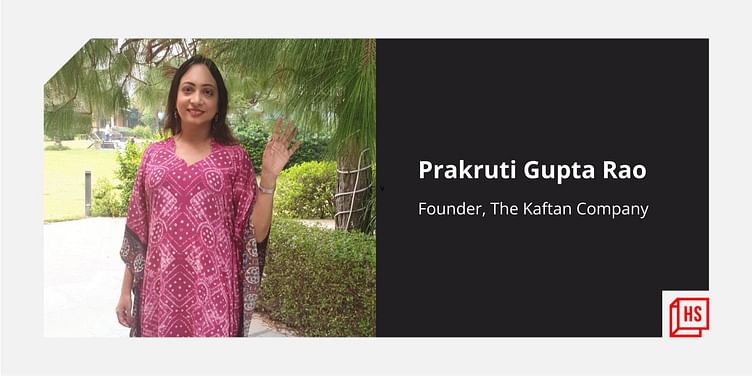 Hyderabad-based Prakruti Gupta Rao did her higher studies abroad, before starting her career working at global giants like Mercedes-Benz. When she was diagnosed with cancer, she decided to come back to India and start her own clothing brand, The Kaftan Company, specifically for the love of Kaftan.

Prakruti Gupta Rao grew up in Hyderabad, where her father was a businessman. Seeing her father treat his employees with empathy inspired Prakruti towards entrepreneurship, but she knew it had its own risks. After finishing schooling in Hyderabad, she moved to Canada for further studies and completed her undergraduate studies in Business from University of Windsor, Canada in 2001. She then completed her MBA from York University’s Schulich School of Business in 2008.

Prakruti started working at Chrysler Financial and then moved to Mercedes-Benz Financial in Canada as a Project Lead before she moved to Dubai to join the Fiat-Chrysler Group. However, soon after her marriage, and during her Dubai stint, she was diagnosed with Hodgkin's Lymphoma cancer in 2010.

While it is easy for anyone to lose hope under the circumstances, Prakruti discovered her life’s purpose during her recovery period.

“When I was diagnosed with cancer, I thought this was the right opportunity and time to move out of the corporate lifestyle and get into an entrepreneur mindset, given my post treatment restrictions,” she tells HerStory.

Prakruti went through three months of chemotherapy and two months of radiation therapy to complete her treatment. “While I was in the hospital, everything was white and boring around me. I realised that I needed to fill colour in people's lives and mine as well."

'I came across digital printing on fabric, and found it very interesting and realised that not many players were in this market. I then decided to start my entrepreneurial journey with Shibori Designs, by working on small home furnishing projects,” she adds.

After her stint with home furnishing, Prakruti wanted to delve into the garment business. She started her research into the kind of product she wanted to make - something different from what’s already available in the market.

“I wanted to venture into an affordable premium branch of garments and realised that the market is flooded with garments which are very similar to one another. I noticed there was no brand which was only doing kaftans. I realised that it is such a beautiful and comfortable silhouette and wanted to do something really different with it. That's when I came up with the idea of launching a brand which focused on kaftans but not just for sleep - I wanted to include it for daywear as well,” she says.

Prakruti started ﻿The Kaftan Company﻿ in 2016 from her home in Hyderabad. She began selling via their D2C online platform as well as other ecommerce websites such as Myntra, Jabong, Flipkart and Amazon. “We have since added many additional ecommerce channel partners including Ogaan, Zivame, Shoppers Stop, Ajio and Tata Cliq Luxury,” she adds.

Prakruti finds Kaftans the most comfortable outfit. “There are no restrictions to our body while wearing a kaftan. The other part is the sustainable nature of a kaftan. There is virtually no fabric wastage in its production cycle. The third thing is, it's one of my favourite garments and when you believe in something so strongly then it becomes very easy to sell it to other people,” she shares.

However, Kaftans have boomed in India only in the last couple of years, so for Prakruti to bring out a unique product was a challenge.

“Kaftans, being a niche product in the fashion world, meant educating our consumers and re-introducing them to a timeless classic in our own way.”

The pandemic took its toll on the brand as well, but it was a good problem to have. With the sale of Kaftans and loungewear increasing during the period, The Kaftan Company had its task cut out, and had to increase production to meet the hiked up demand.

Ever since the pandemic, the kaftan has found itself to be a firm favourite among Indian women, and many brands like Jisora, Sanskruti Homes, The Boozy Button, Pinklay etc. have sprung up in the same category during the time period.

Nevertheless, Prakruti feels that their designed prints created in-house are different and difficult to replicate by other brands.

Prakruti claims the company’s annual revenue growth rate is 3x to 4x at The Kaftan Company. “We want to boost it to 10x in the near future. This will happen with increasing the style counts as well as launching many new collections under the same brand,” she adds.

While The Kaftan Company was started as a bootstrapped startup, Prakruti is now considering opening physical stores and for that she will be looking at raising funds through private equity.