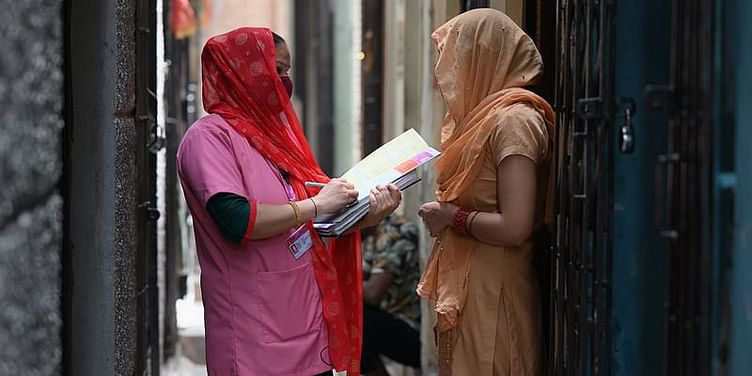 India's one million all-women ASHA volunteers were honoured by the World Health Organisation (WHO) on Sunday for their crucial role in providing direct access to healthcare facilities in rural areas and their indefatigable efforts to rein in the coronavirus pandemic in the country.

Most of them gained spotlight during the peak of the pandemic in India for conducting door-to-door checks to trace coronavirus patients.

The ceremony for the awards, which were established in 2019, was part of the live-streamed high-level opening session of the 75th World Health Assembly.

Among the honourees is ASHA, which means hope in Hindi. The more than one million female volunteers in India were honoured for their crucial role in linking the community with the health system, to ensure those living in rural poverty get access to primary health care services, as shown throughout the COVID-19 pandemic, it said.

ASHA volunteers have also worked to provide maternal care and immunisation for children against vaccine-preventable diseases; community health care; treatment for hypertension and tuberculosis; and core areas of health promotion for nutrition, sanitation and healthy living.

At a time when the world is facing an unprecedented convergence of inequity, conflict, food insecurity, the climate crisis and a pandemic, this award recognises those who have made an outstanding contribution to protecting and promoting health around the world, the WHO chief said.

These awardees embody lifelong dedication, relentless advocacy, a commitment to equity, and selfless service of humanity, he added.

Among the other notable honourees were the team of polio vaccination workers from Afghanistan, who were killed by armed gunmen in the country's Takhar and Kunduz provinces in February this year.

Four of these workers who were women, had been reaching out to thousands of children through house-to-house campaigns in north-eastern Afghanistan.

Afghanistan is one of the two polio-endemic countries in the world along with its neighbour Pakistan.

Attempts to eradicate this crippling virus from parts of Afghanistan and Pakistan have been seriously hampered by deadly targeting of vaccination teams in recent years by militants, who oppose these drives, claiming that polio drops cause infertility.

Other honourees include Chair of the Department of Global Health and Social Medicine at Harvard Medical School and co-founder of international non-governmental organisation Partners in Health, Dr Paul Farmer, who passed away in February this year in Rwanda.