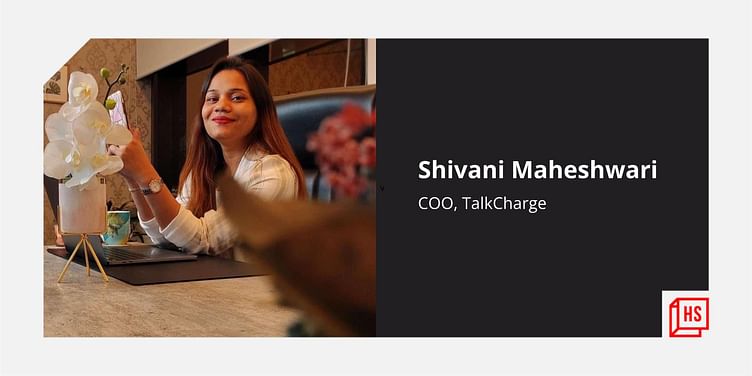 Cashback and coupons platform TalkCharge’s co-founder Shivani Maheshwari catches up with HerStory to share her entrepreneurial journey as a young woman, and the phenomenal success TalkCharge has seen in the last seven years.

Back in 2015, when the Indian startup ecosystem was just shaping up, 23-year-old Shivani Maheshwari took a leap of faith and joined her friend Ankush Katiyar in launching the Gurugram-based digital portal ﻿TalkCharge﻿, a platform that provides cashback and discounts to consumers on ecommerce transactions.

Co-founders Shivani and Ankush were both fresh out of engineering college and in their first jobs at Aon Hewitt where they worked as software developers when they first met each other.

“TalkCharge was Ankush’s college project that he was in the process of developing during our time at Aon Hewitt. We got talking about it, and he asked me to join his venture as he thought that I could take the partnerships ahead and help him shape TalkCharge. I’d seen my father running a business, so I thought of giving it a try as well and that’s how we came together to start a company at the very beginning of our careers,” Shivani tells HerStory.

The duo worked on building their platform online for a year as a side hustle before launching it in August 2015. “Ankush quit his job in early 2015 while I continued because we needed funds to survive at TalkCharge. When we got about 30,000 customers on TalkCharge, I had served a little over two years working two jobs at Aon Hewitt and TalkCharge and that’s when I decided to quit too,” she recalls.

TalkCharge was launched with the idea of making online bill payments and phone recharge easier and more beneficial for people to get cashback and e-giftcards on the portal. Shivani adds, “After the telecom operators increased their rates and the revenue started to dip, we salvaged the startup by integrating cashback, coupons, and discounts on online transactions. At the time, online shopping was stepping up and we thought that it was a great opportunity to bring in affiliate marketing to our business model to generate better revenue.”

Ankush is the tech head of TalkCharge, and Shivani manages stakeholder partnerships, content strategy and marketing.

While starting up at a young age is fairly common now, and even teenagers don the entrepreneurial hats today, Shivani recalls how her peers mocked her when she decided to give up her engineering career working at an MNC to run her own venture.

“When we started to hire for TalkCharge, I’d ask my friends to share the leads or just post about the hiring on their LinkedIn or their networks. Surprisingly, they rejected it saying that my business is too risky since I was doing it on my own. I felt extremely disappointed and demotivated, but I didn’t let it come in my way and just kept working towards my goal,” she shares, adding that her family supported her completely in her entrepreneurial journey.

Shivani also acknowledges the benefit of having a co-founder as it becomes a shared journey. “It’s important to surround yourself with people who share the same passion for things as you do, and can give a different perspective on issues,” she adds.

Shivani first gauged the impact of TalkCharge on a train journey from Delhi to Jhansi in 2017, when she had the app open on her mobile when a girl next to her told her that she uses TalkCharge as well, oblivious to the fact that Shivani is the co-founder of TalkCharge.

“I told her that I didn’t find the app so interesting, to which she replied that it is really good for online shopping and bill payments, and has saved her a lot of money. I just wanted to know her honest feedback,” she smiled.

In the last seven years, TalkCharge has partnered with 1500+ ecommerce platforms to give cashback to its two million customers, which they can also transfer to their bank accounts. The app has reached over a million downloads and its social media engagement has also grown tremendously over the years with some of its Instagram reels reaching 30 million+ views. It generated a revenue of Rs 15 crores in the financial year 2020-2021, Shivani claims.

While many businesses suffered greatly during the pandemic, TalkCharge’s sales went up since people increasingly relied on online platforms for all their necessities during lockdowns.

“Our sales sky-rocketed during the pandemic since people moved online for all their needs and requirements. So even if portals like MakeMyTrip didn’t generate any sales, it was covered by other platforms like Amazon, Pharmeasy etc,” notes Shivani.

TalkCharge has been functioning as a self-sustaining bootstrapped business, but not for lack of offers, with the platform attracting millions in acquisition amounts through the years. The co-founders have clearly declined any proposal.

“We were first offered two million dollars in 2017 to get acquired, but as we had just started, we wanted to see how far ahead we can take it, so we declined. Then around a year and a half ago, we were offered three million dollars for TalkCharge to be dissolved. TalkCharge is our brainchild, and I was okay with it being acquired but not with it being dissolved with no existence left so we declined that offer again,” Shivani shares.

However, while the business is sustaining itself organically, Shivani and Ankush now plan to go for VC funding soon. She is also working hard to build the platform’s reach on its social media handles.

Finally, while young female entrepreneurs are fiercely known as girl bosses, Shivani shared it took her a fair amount of time to establish her authority in the workplace but she overcame the challenge but keeping herself abreast with the dynamic startup ecosystem. “Initially there were times when I felt like I wasn’t heard because of my age and gender because my team had much older people and to establish your authority as a young woman is difficult but the one thing that helped me is to just read and research a lot on whatever role I took up,” she shares.

Michelle Obama says 'Becoming' is not about arriving somewhere but evolving

8 out of 10 women in India face harassment on calls, SMS: Truecaller