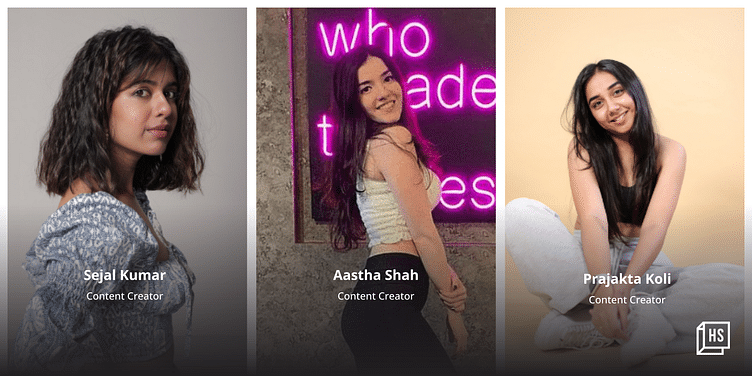 Meet the five content creators who are aiming to be change they wish to see through discussions, deliberations, and content on a wide range of topics.

With over 680 million active internet users, India’s digital population has been growing rapidly in the past few decades. According to Statista, the average internet user in the country spends over three hours per day on social media. The research reveals that a large proportion of this user base were millennials and Gen Z.

As of 2020, India had the highest number of Facebook users across the globe with close to 300 million users. It also estimates that by 2023, there will be almost 450 million social network users in the country, from 326 million in 2018.

In this scenario, the country has also seen the rise of the influencer phenomenon with content creators using social media platforms to engage with a large audience. From fashion, travel, food, and education, to finance–content creators are tapping into niches with consistent and continuous content.

But among the clutter, what also stands out is a group of influential young men and women who are driving change through conversations and discussions on topics beyond the ordinary. They are asking questions, speaking up, and seeking answers on subjects ranging from mental health, climate change, sustainability, and more.

Here are five women content creators who are striving to be “the change they wish to see”.

YouTuber, content creator, actor, and changemaker–Prajakta Koli wears many hats. The 28-year-old has over 7 million subscribers on YouTube and 4 million on Instagram, and shot to fame when her channel, Mostly Sane, struck the right chord with the audience.

In 2020, Prajakta was part of the Creators for Change YouTube Original Documentary, which had Michelle Obama in conversation with content creators including Liza Koshy and Theme Mahlaba. The series tracked the experiences of adolescent girls in Vietnam, India, and Namibia, overcoming adversities to pursue their education.

Prajakta believes that a content creator’s role does not just stop at content. Over the years, she has been vocal on body shaming, hate speech, internet trolling, transphobia, homophobia, and other pertinent topics. She has also partnered with YouTube for Social Impact Girl’s Education Campaign with Instagram on their Safer Internet Week campaign and One.org for their Girl Education campaign. This year, she was appointed as UNDP India Youth Climate Champion to interact with young people and create awareness on the adverse impacts of climate change, global warming, and biodiversity loss felt by all sections of the society.

Sejal Kumar became a content creator in 2014 at the age of 19. With over two million followers, she is one of the most popular content creators in the country.

In 2020, Sejal was one of the eight creators across the world to join YouTube Creators for Change programme with Michelle Obama.

In an earlier conversation with HerStory, she said, “It was a wonderful opportunity that came about very randomly. I was happy to support and create content for the movement of ‘Girls Education’ by Michelle Obama. My interpretation was that girls’ education begins at home and I showed that through my first song Aisi Hun and the short film/music video we had shown the story of a simple Indian girl finding her way to being the fearless girl she always deserved to be.

Sejal is also vocal about women’s health and runs a health platform Maitri, along with her mother Dr Anjali Kumar, to spread credible health information on women’s health.

Having struggled with anxiety and depression, Sejal is a staunch advocate of mental health awareness and speaks widely on the subject through her content.

A popular beauty and fashion influencer, Prableen Kaur Bomrah is known for her “unfiltered and real approach to beauty”.

As a teenager, Prableen had to deal with acne, and then a PCOS diagnosis. This led to her receiving a lot of trolling and criticism on social media because of the way she looked and the visible acne on her skin.

Eventually, the influencer realised that she needed to be real with her audience.

In a conversation with YourStory, she said, “When you meet someone in person, you want to meet the real person and that is what I wanted to be on camera.”

Her first picture with the hashtag #nofilterwithpkb went viral and has led to a strong community promoting body positivity on the internet.

Suffering from vitiligo, Aastha Shah became a content creator to channel the power of social media to raise awareness and fight the stigma around her skin condition.

Her content is vibrant, wholesome, and seeks to empower people with body positivity posts and videos, especially those suffering from vitiligo.

The Gen Z influencer has in interviews recalled being teased and taunted and called a ‘Dalmatian dog’ and how her body image took a huge hit. Since then, she has diversified into different kinds of content including dance, fashion, and make-up.