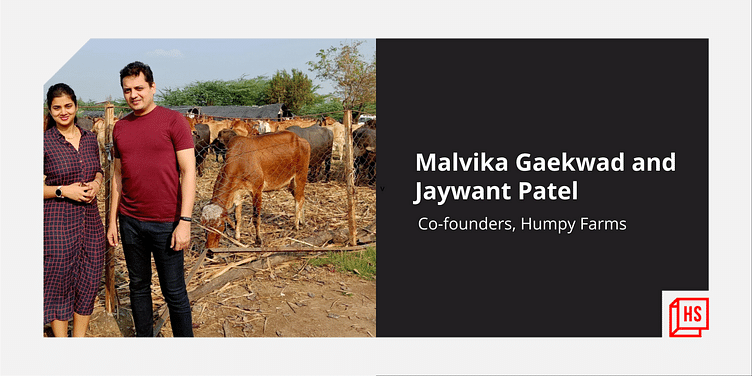 Pune-based startup Humpy Farms has secured Rs 5 crore in funding as a part of its angel round including the capital raised from Piyush Bansal and Ghazal Alagh in the first season of Shark Tank India.

Malvika Gaekwad’s grandfather was among the people who first laid the foundation for Pune’s Agricultural Produce Market Committee (APMC) market. There, the farmers from different villages would bring their produce and prices would be set for the day.

“While every other producer or manufacturer of any goods has the right to decide their prices on their own, farmers never had that right and that really bothered me,” Malvika tells HerStory.

Malvika has also acted in a Marathi film Mulshi Pattern highlighting the hardships that farmers face.

As an engineering student, Malvika picked up organic farming in 2013. After convincing her parents to purchase a small piece of land to practise organic farming, she bought one acre of land.

During an internship at Uniken, she met Jaywant Patel and connected over their passion for organic farming. However, the duo realised that selling their produce at the APMC market yielded little value as the vendors and sellers are not aware of the organic products and would treat organically and commercially grown produce as the same.

This prompted them to work on their own marketplace to reach out directly to the people within Pune who are looking for organic produce through ﻿HumpyFarms﻿. Eventually, they began focussing on providing healthy A2 milk by leveraging their existing networks of farmers they knew.

“Delivering many product ranges was a challenge to handle. So we thought why don't we deliver a product that every family needs every morning? That's where milk came into existence with the organic farming principles in mind,” she says.

Based in Pune, startup's flagship product is A2 milk. HumpyFarms also sells products such as paneer and ghee as well as a range of staples like breads, flavoured honey, cold-pressed oils, spices, dals, and millets, among other things. Milk and frozen food are sold only in Pune while non-perishable products are delivered across India and can be ordered via its mobile app and website.

Its two variants of A2 milk–desi cow A2 milk and desi buffalo A2 milk–are priced at Rs 89 per litre on a subscription basis.

They are served either raw which is just chilled and delivered with a shelf life of one to two days or pasteurised where the milk is heated, chilled, and delivered to increase the shelf life to two or three days.

Malvika says that the milk is delivered within 12 hours of collecting from the farmers.

Documents seen by HerStory reveal that the startup follows a rigorous process of DNA testing of cows and milk quality to meet the criteria of A2 milk. The milk is tested for 16 different adulterants and a range of antibiotics.

Malvika says her startup competes with multiple unorganised players in Pune whose products are not tested or certified.

“Our real challenge is informing and educating about their own products as many unbranded and unorganised players are manipulating the market. So we take extra care of the quality. We also allow consumers for farm visits and send videos of our processes. Because we are demanding a higher price,” she says.

The startup also raised a fund of Rs 5 crore as a part of its angel round including its funding raised from  Piyush Bansal and Ghazal Alagh at the first season of Shark Tank India.