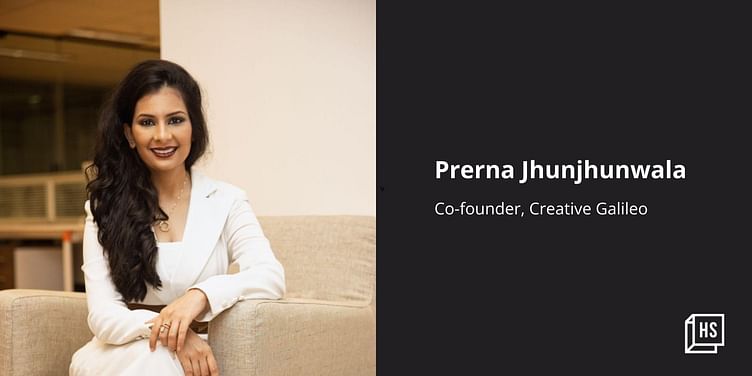 Creative Galileo is India’s first character-based e-learning platform in the foundational learning space for children in the ages 3-10 years.

While travelling across India at a young age, Prerna Jhunjhunwala couldn’t help but notice the vast divide in education access in the country.

“This deprivation led me to make up my mind to make education accessible to children in the remotest parts of India,” Prerna says in a conversation with HerStory.

Years later, Prerna, along with a colleague Nikhil Naik, started ﻿Creative Galileo﻿, a new-age edtech startup that claims to be transforming early learning for children in the three- ten years age range.

Since its inception in July 2020, Creative Galileo’s Little Singham Early Learning app has recorded over seven million downloads and has over 700,000 monthly active users.

Global impact intelligence platform HolonIQ listed Creative Galileo on its annual list of the 100 most promising edtech startups from India and South Asia.

Creative Galileo’s Little Singham is listed among the top 20 apps in the education category across all age groups and is the only one in the early learning space on the Google Play Store.

The team works on pre-emptive aptitude tracking for children through games so that their personalised learning journeys are built on their prior knowledge.

While the Little Singham app is currently available for free without advertisements, Creative Galileo says it will be moving towards freemium model with a varied subscription plan.

Prerna, a graduate of NYU (New York University), is a firm believer that a child's future not only depends on their grades in various subjects but also on their social, cognitive, and leadership skills.

Nikhil comes with 13 years of relevant experience in building direct-to-consumer products and internet ecosystems in Asia. He was a founding member and instrumental in building a Silicon Valley-based startup, Vuclip. He has led business development, marketing, and product development units.

“While I saw a huge success with my pre-schools in Singapore, I still wanted to reach out to a lot more children and make a difference in their learning in their budding years and the only way to was through online space.  Hence, I decided to foray into the online education space, thus leading to Creative Galileo,” says Prerna.

She believes the education sector is dynamic. The pandemic, according to the co-founder, exposed the gaps in the modern education system. The complete shutdown of schools and colleges revealed the fragmented adoption of digital capabilities.

“It was easy to fill this gap by coming up with student e-learning and associated platforms as blended learning became more mainstream. We launched our App amid the pandemic as a proof-of-concept and the results were overwhelming. We used a lot of narrative videos, gamification and personalised learning journeys to keep it entertaining and relevant for our audience,” says Prerna.

During the initial research, the team realised that the foundational years of education are the most important ones and that children in grades six to ten can not grasp complex subjects until their foundations were strong. The team then started working on making early learning more fun and immersive for children.

“As an educator, having established preschools, I firmly believe that a strong foundation is essential for a strong future during the budding years,” explains Prerna.

Initially, the company wanted to create something which could help bridge the gap in the existing teaching methodology. The objective was to offer personalised inquiry-based learning methods and experiential activities resulting in a fun, interactive curriculum with technology.

Personalisation and gamification are the two most significant factors that are embedded in the programme, the co-founder says.

“We launched amidst the pandemic so the challenge was to scale up and to reach out to the Tier II and III markets of India. However, when we launched we saw a lot of acceptance across India, almost 65 percent of users were coming from Tier II and III cities. This showcased the need for quality and localised content in the early learning stage. We saw a whopping one million downloads from all over India, with an average rating of 4.8 stars in the first few months of launch,” says Prerna.

The team aims to create a platform that is scalable and works as a plug-and-play model. The company currently is in the process of closing its Series A funding. Last October the startup raised $2.5 million in a seed round led by Kalaari Capital.

Creative Galileo is also the first portfolio company of CXXO, a Kalaari Capital initiative championing the next generation of women founder-CEOs to promote inclusive growth.

The company has used the capital to scale product development, build content, forge partnerships and expand its team. It has also devoted resources to developing content in local languages and opening services in new markets.

“We believe the blended learning format will take precedence over everything else, and apps like ours will come in handy to bridge the gap. We want to penetrate newer markets, strategically selecting edutainment content that can offer crucial reinforcement for learning,” says Prerna.

The aim is to achieve 10 million downloads in the next 12-14 months. Creative Galileo is also exploring international markets. Its immediate expansion plans will focus on scaling up in emerging markets within Southeast Asia, where it will integrate local languages from the region, such as Bahasa Indonesia and Bahasa Malaysia, into the app while retaining the app’s user experience.

"We are also in the process of building a content library, introducing new characters (a mix of Indian and some beloved international characters) and vernacular languages pretty soon. Also, in the near future, we will see these characters interacting together in one space, which is pretty unique, thereby allowing kids to play with all the characters in a controlled manner,” says Prerna.