World Music Day 2022: Through storytelling and folk music, the Tetseo Sisters take Nagaland to the world 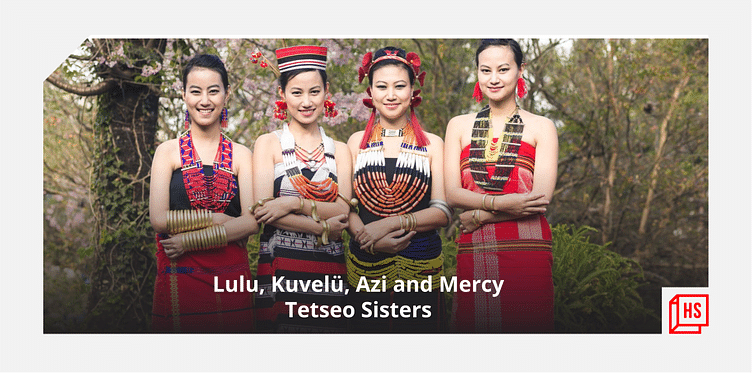 The Tetseo Sisters—Mercy, Azi, Kuvelu and Alune, along with their brother Mhaseve—have been creating ripples in the music scene. Their tunes are rooted in Naga tradition, and on stage, the quartet are particular about showcasing the colours and costumes of the ‘land of festivals’ —Nagaland.

“O Rhosi! Have you seen the Rhosi! We are all given one shot, one shot to live beautiful lives. Like the Rhosi flower, Oh like the Rhosi…” goes the peppy and folksy tune from Tetseo Sisters, a quartet of sisters from Nagaland. 'Rhosi’ is a wildflower found in the Phek District of Nagaland, and stands for youthfulness, energy and enthusiasm.

They grew up in Kohima, the capital of Nagaland.

The Chakhesangs have a unique culture and are famous for celebrating various festivals. And Chokri is one of the three languages spoken by the Chakhesang community.

“These days, children speak English, French, Korean and probably some other language, but are rarely interested in learning the vernacular dialects. Our mom and dad really put the effort to encourage us to speak our dialect, and they felt it was a very good idea to learn it through songs,” says Mercy, in a conversation with HerStory.

On World Music Day, meet the 8 indie Indian women musicians you need to put on your playlist

It’s all in the family

The Tetseo Sisters’ parents familiarised their daughters and son Mhaseve with Li, the traditional songs of their home region, from early on.

“We used to perform in church form, in school, and at different functions and what not. And eventually, we started performing together as a group. It was probably in 1994 when we all performed for the first time together, as a band, and when Lulu was still a toddler. We didn't even have a name back then,” recalls 40-year-old Mercy, who also works as a content creator and has recently moved to Mumbai.

The band officially debuted with an album called Li Chapter One: The Beginning at the Hornbill Festival in 2011, when not just the sisters, but even their brother Mhaseve and their parents performed on stage.

“It's been like that through our childhood, different combinations of us all. Sometimes all four of us sisters are together and some other times, we're performing in twos and threes as well. There have been times when even just one person turned up on behalf of the sisters, or when we have had events on the same day, and we have had to split up,” says Mercy.

After that first official debut, the sisters took to YouTube to showcase their songs and culture through their own channel, and credit the social media platform for enabling them to bring back the essence of Chokri language through their music videos.

The siblings never had any formal training in music. Mercy says they went through the drill of church choirs, learning how to read music and performing at local events.

“Nagaland is a very musical place. Everybody sings, if not formally, or professionally, at least, you know, in the church, or at home, or in social circles. And every second person can play a musical instrument,” she says.

However, the sisters felt there were very few people who performed folk music, and into folk as a genre.

“We have collaborated with a lot of artists, both from the Northeast as well as outside. One of our very popular singles is a song called As We Go, which is a fusion with a musician from Bombay, Pandit Naviin Gandharv,” Mercy adds.

Released in 2018, the song, inspired by the traditional Ao folk has been worked into a ballad with lyrics in English. It is a reflection of the journey of Nagaland and its people through the many years of struggle.

The video was shot along the Manali- Leh route, when the sisters were on a three-week journey through Jispa, Sarchu, Mooré Plains, Leh, Nubra Valley, Turtuk and Pangong Tso. The song also has glimpses of Kohima, Nagaland and Mumbai.

“Naviin is the world's only musician who plays an instrument called the Belabaharr, which combines the Sarangi with the Violin at the same time. It is played like a violin but it sounds like the sarangi,” says Mercy.

She says although the group became popular from performing traditional folk, specifically Chokri Li, as artists, they do not want to typecast themselves to any particular genre. “At the most, we can call ourselves vision artists, because that’s something we have been dabbling with,” Mercy says.

The band has been the recipient of many awards, including the Trail Blazer Award at the 4th Nagaland Music Awards in 2012 and Eastern Panorama Achievers Award for excellence in Music in 2014, North East Young Hero Award 2020 in Music and Entertainment, and the Thüvopisümi Global Excellence Awards 2021 amongst others.

Recently, the sisters (barring Azi, who had a baby in April) got the opportunity to perform at the Ladakh International Music Festival 2022 along with their brother Mhaseve. Terming it wonderful to be performing in the hills, Mercy says the idea of festivals is really not new to the band.

“We've been through most of the festivals before they became really popular. We played at NH7 in 2014. We played at Summer Storm Festival in Bengaluru as well. We performed at cultural festivals mostly, I think they used to be held before all these music festivals became a thing,” she adds.

Music as a binding factor

The Tetseo siblings may all be at different stages of life now–but music binds them together.

“Azi is a full-time homemaker, for now, she just had a baby in April. My brother is a full-time music producer and plays music with a couple of bands. Kuku is a lifestyle blogger and beauty influencer who has her own channel on YouTube, and Lulu has completed her MBBS and is doing her bond service now,” says Mercy.

“Music keeps us together despite our different interests and everything. Living in different cities, we get together a few days before a gig or, rehearse online. It’s funny how people never understood that concept before the pandemic, but now everyone is doing it,” says Mercy.

What next for the band? “We have a bunch of corporate events coming in. Before the pandemic hit, we were doing a lot of school visits, and we got this wonderful opportunity to talk about what the Northeast is about - the culture, the food. It’s one way to acquaint people with something you don’t easily find in books or curricula–through music!” Mercy signs off.