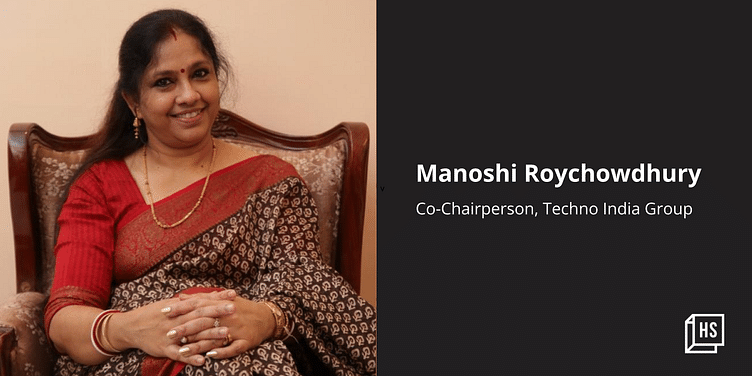 “Women entrepreneurs are the most balanced people in the world. They can manage work and personal life equally well…they have the potential, they just need to believe in themselves,” says Manoshi Roychowdhury, Co-Chairperson of Techno India Group.

Kolkata-based Techno India Group was founded in 1985 by Manoshi’s husband, Goutam Roychowdhury, to offer study management and upskilling programmes. Today, the company has grown to extend its offerings in health, media, publication, and entertainment, while continuing to focus on education.

Across verticals–universities, colleges, and schools–the Techno India Group is associated with 5,000 teachers, offering 60 different courses to about 60,000 students.

Manoshi has received the 2021 Woman of Excellence Award for her Outstanding Professional Achievement and Contribution in Nation Building, the Atmanirbhar Bharat, Women Achievers Award, The Mother Teresa International Award for Education, and the Entrepreneurship Development Shepreneur Award from the Eastern Chamber of Commerce in 2018.

Manoshi pursued her graduation in Zoology from Burdwan. Getting married at an early age of 22 years did not stop her from pursuing her dream. While pregnant with her first child, Manoshi appeared for her Zoology Master’s examination from Bilaspur. Later, she moved to Kolkata.

“My father-in-law had asked me what I wanted to do next. My dream was to pursue a Master’s in Mass Communication, and so I did,” Manoshi tells HerStory. After completing her Master’s from Bharatiya Vidya Bhavan, Manoshi began helping her husband with a group of 72 computer centres across Bengal.

What started in 1985 as a computer centre set up in a garage, soon led to the foundation of West Bengal’s first private engineering education institution–Netaji Subhash Engineering College in Garia, Kolkata, in 1998. The college is part of the Techno India Group, where Manoshi is the Co-Chairperson.

“Being a student of Zoology and Mass Communication, I got a lot of backlash for my association with an engineering college,” Manoshi recalls. “I lacked confidence, and being an introvert did not help either. Every time someone said that I wasn’t the right fit, I would go back to my shell,” she adds.

When asked what helped her overcome her lack of confidence, Manoshi says, “My students gave me the positivity, energy, and confidence to do better, and do more.”

“There was something lacking in the pool of students who enrolled themselves for the college…The base had to be stronger,” Manoshi says.

Thus, in 2005, the Techno India Group Public Schools were established.

Education at the forefront

In the last two decades, Manoshi has been instrumental in setting up about 20 schools. The schools, in total, have a seating capacity of 15,000 students from varied backgrounds.

“We have students from the underserved communities in villages and small towns, and we also have students with doctor and lawyer-parents. The Techno India Schools became a common ground for students across socio-economic sectors,” Manoshi tells HerStory.

The schools are targeted toward the masses and charge a very nominal fee for admission. “It was initially challenging to convince teachers to admit students from across backgrounds, but later we got lucky with the set of teachers hired for the schools,” Manoshi says.

Besides studies, Manoshi encourages and ensures that students are equally immersed in co-curricular activities to ensure more potential avenues in the future. Eminent artists including Srabani Sen, Dona Ganguly, and Bratati Bandhopadhyay are associated with the schools.

“I was often questioned for my intentions. I was told that my husband already made so much money, so why did I need to go to work? But I wanted to contribute towards the education of students, and making money was never a concern for me,” Manoshi says.

Today, Manoshi leads an environment-friendly eco-tourism venture in Jharkhali, Sunderbans–Jhore Jole Jongole. The edu-tourism venture is aimed at providing a platform for local artists to think about entrepreneurship, selling their products, and being financially independent.

“I was always an introvert. I could never speak for myself even at times when I knew I was right. I was always surrounded by men in the meeting rooms and every difference in opinion meant I had to prove myself… Earlier I tried proving myself with words, now I just execute my plans and show,” Manoshi says.

When asked if it gets lonely at the top, Manoshi reveals that she finds solace in gardening, and her interests in photography, tourism, film, and music keep her busy during downtime.

Manoshi has started two more schools in Indore and Bhopal. “I wanted to bring more jobs to the country, build more entrepreneurs in India, and I wish to establish such schools across states,” she says.