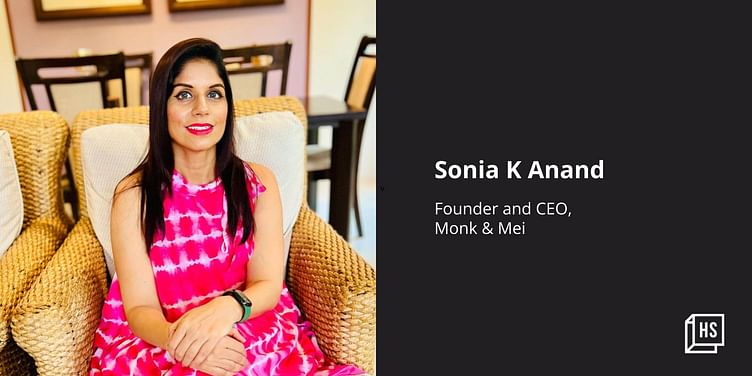 Launched in 2018, Monk & Mei is a Mumbai-based brand that showcases the work of tribal women and youth karigars from rural parts of Odisha.

While working as a management consultant with PwC and Ernst & Young, Sonia K Anand would often consult for the social sector and work in the rural and tribal parts of India.

“I was doing this for over 15 years, and I have worked at the grassroots and was keen to see the impact of policy,” Sonia tells HerStory.

It was during this time that she happened to meet several tribal women at a programme with the Chief Minister of Odisha. “I met with 30 tribal women and they shared how they've come back from Tirupur (Tamil Nadu) and some from Faridabad (Haryana). Having worked far away from home, they were looking for an opportunity to get closer to their homes and communities. It led me to start Monk & Mei,” she says.

Mumbai-based ﻿Monk & MEi﻿ is a sustainable clothing brand and began its journey in 2018 by working on contract manufacturing of corporate uniforms.

The team started with a small setup, but eventually expanded into a factory. Today, the 100-sewing machine setup of Monk & Mei in Odisha employs 91 tribal women and rural youth karigars (artisans) from the state.

“We started with walking and carrying bags of threads, laces, fabrics and needles, to within six months getting a full truckload of raw material to our premises,” adds Sonia.

Unfortunately, cyclone Fani hit the region in 2019, affecting its business. Leveraging its manufacturing setup, however, Monk & Mei decided to pivot to a consumer-facing clothing brand.

“We were making Kurtis for a large manufacturer, where we would get the fabric from Jaipur. I started researching deeper and realised that women in smaller towns didn't get the latest in fashion. The higher end brands were also very expensive,” says Sonia.

While the team started with the popular hand block prints from Sanganer, Rajasthan, it soon realised the need for accessible-yet-conscious designer wear.

Monk & Mei’s first designer collection, “A Rose from my Old Diary” in linen fabric with digitally rendered roses, was launched in March 2020 and was an overwhelming success with 500 styles sold in the first 15 days of launch.

“It took us 200 days to strategise our offering. Starting with freelance designers from established fashion houses and outsourced sampling to having our own 12+ member team of in-house designers and Master-Jis (experienced tailors), with 100 years of enriching experience, working in our own workshop, in mere 500 days was quite a roller coaster ride,” says Sonia.

Why work with the tribal women

Hailing from an army background, Sonia and her family would travel often. Once during her visits to Nalanda, Bihar, she saw a group of 20 women who had guns in their hands.

“I remember being curious and enquiring about them. I realised they were young girls between the ages of 13 years to 18 years. I was shocked by the work they had to do to survive. I asked them why they were not studying, to which they replied, they don’t have the basic means of survival, so education was a distant dream,” says Sonia.

The entrepreneur says the incident, which led to several sleepless nights, was also the reason she became interested in the social sector. The meeting with women in Odisha gave her the final push to start her own venture in this space.

Alakh Pandey unplugged: From a roller-coaster ride growing up to now disrupting without trying

Sonia says the brand makes luxurious attires accessible to every woman. Monk & Mei has couture designs in Pret-a-Porter (ready-to-wear clothes) for every size and age. Its handcrafted merchandise lies in the range of Rs 3,000-Rs 8,000.

Sonia explains most of the brand’s indie-fusion styles are sewn to be worn in different ways for different occasions. Every dress comes with accessories such as masks or earrings or hair scrunchies made from leftover fabric. This reduces wastage and generates employment.

“This is an initiative started by the wife of our Masterji, giving an opportunity of livelihood to women at home,” says Sonia.

The brand’s tags are embedded with seeds to grow plants. The brand has so far distributed 15,000 seed tags, 10,000 jute bags, and 15,000 masks, contributing to a greener planet.

“We continue to be one of the fastest growing brands with 500 new styles from 12 new collections, leading to 51,000 organic followers on Instagram and 12,000 customers along with more than 250 celebrities/fashion influencers endorsing us organically in mere 500 days,” the entrepreneur adds.

According to Sonia, the brand figures among top sellers on ecommerce platforms such as Nykaa Fashion and Myntra for Earth. Monk & Mei also launched Pernia’s Pop-Up Shop—a multi-designer fashion website—to cater to the NRI market.

“With an established supply chain and a team of over 20 in-house experts from designer to marketers, we are building robust market linkages with the upcoming launch of Tata Indiluxe, Ajio Luxe in June 2022,” says Sonia.

The average order value on Monk & Mei is at Rs 5,500 for domestic markets and Rs 15,000 for international markets, Sonia says. The brand has a 100 percent online presence.

“We were the first one during the early days of pandemic to offer virtual trials on our website. After successfully managing pretisation of couture wear, we have laid a strong foundation for our online model and will continue to strengthen our online presence with more focus on Tier II/III cities in India which has not many designer labels offering fresh collections and also internationally, especially with the positive response coming from platforms like Pernia Pop-Up Shop,” says Sonia.

While there are designers like Kavya Singh Kundu who are focussed on more sustainable fashion. Sonia explains there was no designer label offering an affordable price. Most of them start at Rs 15,000. Those available in less are either cheap copies of big designers or not so-well-known for a woman to trust and purchase.

Sonia says her brand not only helps consumers access sustainable fashion at an affordable price but also streamlines its inventory to make production more efficient.

“Also the majority of our revenue comes from 30 percent of our top selling styles and we maintained stocks only for these. For the remaining styles, we adopted the JIT model where we partnered with the Masterjis to operationalise Made to Order. This kept our inventory under control while creating employment for many,” says Sonia.

Speaking of the future she says, "One of the major areas of interest for conscious brands like us is planning a virtual version of our existence. We foresee a great role for ourselves in Metaverse and Web 3.0. Seeing an Indian woman attending MetGala virtual version wearing Monk & Mei is the future.”

According to Sonia, the brand also helped its employees, who were forced to give their salaries to their husbands, regain financial independence.

“With several of our focussed growth and development training, women learnt how to live financially independent lives with their head held high. Many of these were skilled handicraft artisans who revived and aligned craft like pattachitra on designer clothing and brought them to life to be experienced by women of the world,” she adds.

(The headline of this article has been updated)