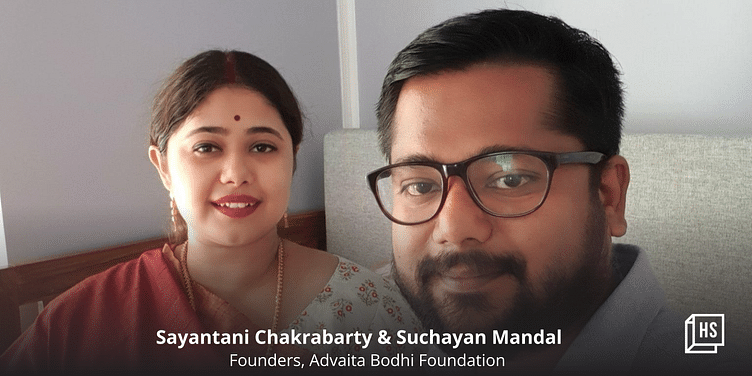 In a small village in Nadia district, which borders West Bengal and Bangladesh, twenty-year-old Rupali played multiple roles in her daily life. A university student by day enrolled in a postgraduation course at Kalyani University, Rupali also worked as a labourer at night–laying tarmac on the rural roads.

When a digital literacy workshop was held near her village in early 2021, Rupali jumped at the opportunity to increase her digital awareness. If that meant she had to stop earning a daily wage, she didn’t think twice about it, because she knew gaining a master’s didn’t guarantee her a job, but learning to use the computers would definitely lead to employment.

Rupali was one of the first students at Advaita Bodhi Foundation, a non-government organisation started by wife-husband duo Sayantani Chakrabarti and Suchayan Mandal.

“That Rupali was willing to attend our workshop for a month, and in the process sacrifice her daily wages was something that motivated us. It only reinforced our belief in what we had set forth to do,” says Sayantani.

A former editor with a well-known publishing house, Sayantani, 30, and her journalist husband Suchayan, 33, were living in Noida before the COVID-19 outbreak.

When the pandemic started and remote work became the norm, the duo moved back to their hometown, Kalyani, in West Bengal. They witnessed first-hand the harsh realities of online education at the grassroots level, and how despite having smartphones, people often didn’t know how to use them beyond watching videos on YouTube and WhatsApp.

“The internet is the only thing that's becoming fundamental towards making India an equitable society. We stand at an inflexion point currently, and everything depends on this digital gap and how we solve it. We wanted to lay the bricks to reduce this digital divide in some way, and that is how Advaita Bodhi started. Our prime focus is livelihood development for the rural communities through a digital environment,” says Sayantani, Co-founder and Chief Education Officer at Advaita Bodhi Foundation.

Building the blocks for digital labs

Sayantani and Suchayan first began by setting up a Jana Pragati Udyog (JPU) at a school in a local village, Chorsorati. The JPUs function as a physical-digital lab with computers, projectors, printers, and internet connectivity. This is where the couple started their first digital workshop, with Rupali as an earnest student.

The workshop saw nearly 150 young men and women, aged between 18 and 30 years. The couple made sure the JPU gave the feel of an open space where rural folks of all age groups could walk in without hesitation and learn digital and financial skills.

“The idea was to start with the basics. The people were trained to use digital payments, internet banking, selling on ecommerce, making PAN cards, making Aadhar cards, booking train tickets etc. We also trained them to help others with these,” says Sayantani.

Many of the first students were from weaver families, keen to learn how to sell their weaves on ecommerce portals, Facebook, and WhatsApp.

“There are two villages–Nazirpur and Nischintapur–these are the places where Bengal special batik and tant saris are made. The weavers here get paid only on a per-day basis, and not per-sari basis. They could be weaving three to four saris in a day, but the middlemen only pay them on a per-day basis. This means they get paid Rs 150 to Rs 250, whereas the middlemen earn up to Rs 2000 per sari. The weavers knew the only way forward for them was to be digitally educated enough to be able to sell their products directly online,” says Sayantani.

After the success of that first JPU, word spread. The couple saw that there was tremendous hunger for learning among villagers and tribals alike. The duo then started mobilizing help and asked around for donations of laptops and other digital equipment.

Today, Advaita Bodhi is present in two districts, with six JPUs across these two districts, and three of their early students now working as full-time trainers in these centres, Rupali being one of them. While Suchayan travels to each of these JPUs every week, Sayantani manages to visit them over the weekend.

“Running an NGO is not easy, and we also need a steady income. So, we decided that one of us will continue to work outside the organisation to get a steady monthly income. My husband is fully dedicated to the NGO now, and he and six other employees draw a small salary out of the NGO,” explains Sayantani, who works for an edtech startup.

Advaita Bodhi runs on the generosity of angel donations. The foundation has managed to run on monetary donations from angels and refurbished laptops and computers from organisations.

In the course of their work in Nadia district, Sayarntani and Suchayan also started looking at tribal upliftment after noticing a worrying pattern in a remote village.

The tribals in the village were making country liquor out of rice, grown abundantly in the region, and drinking it through the day. In the mornings, they would go and pluck Mahua flowers and make Mahua, which is another kind of country liquor.

“It was not on our agenda earlier. However, seeing that these tribals had nothing to do but drink country liquor morning to evening, and seeing the children around them observing them and learning the same thing, we felt compelled to do something,” says Sayantani.

“We provided them with a computer and a couple of pen drives which had educational cartoon shows and videos for the kids. The children were hooked,” she says.

When asked if there were no government schools around for the children, Sayantani exclaims, “There are a lot of schools but where are the teachers?! The classrooms don’t have teachers, but still, the children are so excited to go to school. Do you know why? Because they get a midday meal and eggs, they are especially kicked about eggs. If you look at it in a positive way, at least the children are getting nourishment.”

She continues that the amazing thing to note here is that many of these tribals have smartphones but do not know how to use them to benefit them.

“The West Bengal government gives money for smartphones to those who have passed Class 10. However, a lot of work needs to be done, and educating them is the priority, then comes digital literacy,” she says.

For Sayantani and Suchayan, the road ahead is long. Nevertheless, they draw inspiration from small wins. Recently, one of the earliest students of the foundation, a young man named Paul, who had enrolled for a BA course in a local college and had zero technical knowledge, called Suchayan to inform him that he had got a job at a Dell repair centre in Kolkata as a salesperson.

“When he joined the workshop, the only thing he wanted to do was learn to use the computer. Getting a job in Kolkata was a far-away dream,” smiles Sayantani.