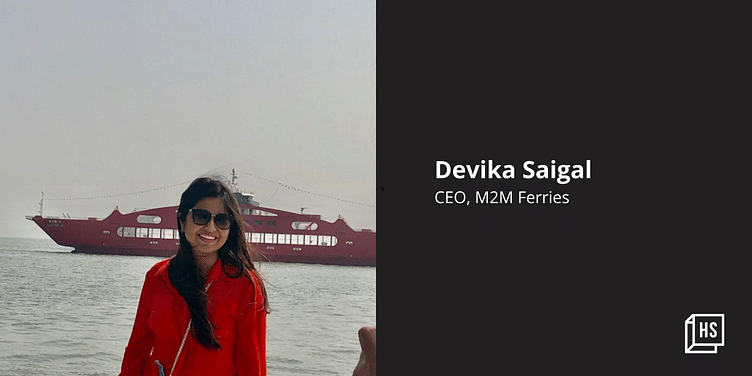 A road trip from Mumbai to Mandwa, a port village nearly 100 km away, can take about three hours or more, depending on the traffic. But what if the travel time is cut short to one hour and the distance to just 19 km?

For the last eight years, Devika Saigal, CEO of M2M Ferries and Mandwa Jetty, has been working to redefine Mumbai's waterways and develop terminals and facilities for easy coastal passenger movement.

“About 10 years ago, the Mandwa port had nothing except for two shops. The government wanted to start a pilot project and asked interested parties to come forward and develop the jetty. We jumped at it! There are so many waterfronts across the world, and there's always something or the other to do there,” says Devika, who has a master’s in International Management from the University of Bath. She tells HerStory that her family runs Esquire Shipping and Trading Pvt Ltd, a cargo management company.

For a long time, Mandwa village’s jetty was only used by people travelling to Alibaug, the district headquarters of Raigad and a popular weekend destination of the Konkan region. The village gained fame after the release of the 1990 film Agneepath, starring Amitabh Bachchan, and its 2012 remake of the same name, starring Hrithik Roshan and Sanjay Dutt.

In 2016, Devika and her team decided to transform the Mandwa jetty using old shipping containers.

“Mandwa was a transition point for passengers going to Alibaug, so I strongly felt we had to transform the place. We started small, set up an ATM first, then public toilets, shops, and eventually came up with the idea of a container park called Beach Box, where we recycled about 20 shipping containers and converted them into shops. We even opened an amphitheatre for live musical performances, theatrical acts, open-air film screenings, flea markets, and dance and fitness sessions,” reveals Devika.

The impact was instant, with footfall increasing from 2,000 to 50,000-60,000 per weekend. The success of the port’s development seeded the idea of M2M Ferries, enabling greater passenger movement, especially for people bringing their own vehicles.

After preparing, M2M Ferries launched Maharastra’s first Ro-Ro service between Mumbai and Mandwa in Alibaug, in March 2020. However, before the ferry service could begin, the operations came to a grinding halt with the overnight lockdown announcement.

The company finally started its commercial operations in August 2020, with the shipping vessel capable of carrying 500+ passengers, 120 cars/buses, and 60 bikes.

According to Devika, the ferry service makes Mandwa accessible throughout the year, which wasn’t the case earlier.

“During the monsoon months, the port was not accessible because speed boats and regular ferries are smaller in size and they couldn't operate between Gateway of India and Mandwa. But our ships are suitable for all kinds of weather, and this has also helped the locals with the daily commute to Mumbai for work,” she explains.

While passenger services have ticket prices ranging from Rs 400 to Rs 1,500, vehicles like cycles are charged Rs 100, cars are priced between Rs 1,000 to Rs 2,000, depending on the size, and buses are charged anywhere between Rs 3,000 to Rs 7,000. Tickets can be booked online or at ticket counters at the site, and services begin at 7 am.

When it started in 2020, on the first day of its commercial operations, the service saw around 100 passengers and 150 vehicles. In 2021, the service carried over 5.5 lakh passengers, over one lakh cars, and about 30,000 bikes, according to Devika. She adds that vehicles travelling on the ferry services as opposed to the road also led to a significant reduction in the carbon footprint.

Not an easy sail

The M2M Ferries shipping vessel is about 100 metres in length and was imported from Greece. Devika states the company’s initial investment was Rs 75 crore. Noting that she does not expect to break even in the short term, the entrepreneur says she is in it for the long haul.

“Before importing this vessel from Greece, we sent our crew there to understand how to park this vessel; it’s a ship and it’s not easy. We had to train in the skills of parking, lanes etc, and it had to be precise. We now load up in about 10 minutes. Our ground staff is local but we made sure our crew had shipping or merchant navy background,” informs Devika, adding that a regular service has a crew count of about 30-35 members, including, housekeeping, security and operations. The company currently has 100 employees.

As a self-funded company with no institutional funding, revenue flow is a concern.

“We initially faced setbacks as the tourism industry was hit hard during the pandemic, and we had just begun operations in 2020. We didn’t expect to be shut for the first six months when we started! But I would still say it’s a promising business, and we are looking forward to the next two-three years without any further interruptions,” says Devika, declining to share revenue numbers.

She adds that May has been a busy period, with the vessel carrying nearly 65,000 passengers in the month alone.

The maritime industry has traditionally not been associated with women. According to BIMCO/ICS 2021 report, though the sector has seen a 50 percent rise in the female seafarer workforce since 2015, women only represent 1.2 percent of the global seafarer workforce.

As a first-mover in the segment, Devika says it has been a struggle to run the business.

“Even in terms of funding, we can’t give the shipping vessel as collateral, so convincing the banks to bankroll it was difficult and time-consuming. Finding a way to work around it was a massive effort, and by the time things fell into place, COVID-19 happened!” she says.

Despite the challenges, the young entrepreneur is raring to explore future plans. “While this experience with Ro-Pax has been great, we want to look at vessel number 2 or 3 to go to other ports. We are also very invested in creating more destinations. We have partnered with ﻿BookMyShow﻿ venues as well,” says Devika.

She continues, “Creating waterfronts and transforming these spaces has been a personal passion. In our country, hill stations are popular, but with the kind of coastline we have, waterfronts also have huge potential, and we can create marinas to attract tourists. We would love to explore yachting because it is really popular worldwide, so why not in India?” concludes Devika.