This entrepreneur’s love for coffee inspired her to start a café... on a remote Nagaland highway 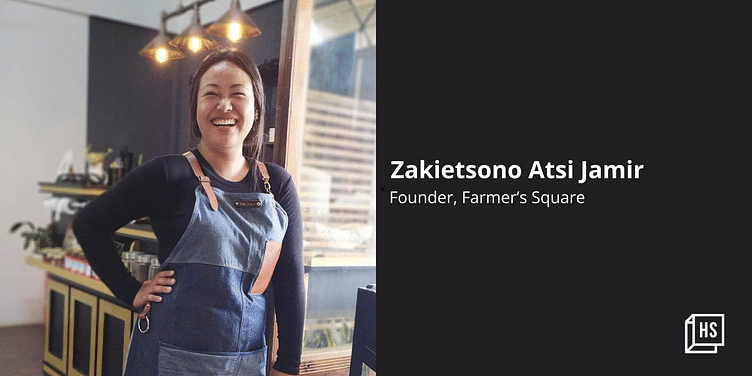 Zakietsono Jamir, aka Atsi, started Farmer’s Square café in Medziphema, Nagaland, in 2019. Through her enterprise, Zakiestono employs and provides a steady source of income to young men and women from nearby localities.

Nagaland's Medziphema is neither a hill nor a valley. The town is more of an interface between the two. In this quaint little town sits Farmer’s Square cafe, run by Zakietsono Jamir, aka Atsi.

“My full name is Zakietsono Jamir, but everybody calls me Atsi. It's short and sweet, I guess,” she says, laughingly as she introduces herself for this interview.

Atsi is a coffee-lover, so much so that it inspired her to start a café in her hometown Medziphema. She has no previous experience being an entrepreneur, nor is Nagaland popularly known as a coffee-growing region (although, in recent years, the state has seen a spurt of coffee farmers).

So, what inspired Atsi to take the plunge?

A sheer determination to be independent in every way, given that she was raised by a single parent and always dreamt of being a woman achiever.

“None of my family members are entrepreneurs, and we have no idea about running a business. I started this as a way of becoming independent, earning my own money, and running my own firm,” says Atsi, who was earlier teaching at a primary school and running a students’ hostel.

One day, Atsi’s friend informed her of a coffee workshop at Kalita Café in Guwahati, Assam, which provided her a peek into the coffee industry. “I was convinced that there was more to coffee than just instant brew, and I felt I should explore it through a café,” she says.

Atsi set to work immediately. In late 2016, she launched a small coffee shop in Medziphema. However, the inexperienced entrepreneur ran into severe financial problems.

Sometime in mid-2018, she was forced to shut shop. Keen to learn from the experience yet, continue with the concept, Atsi decided to pursue her further studies on coffee and come back with the necessary resources and capital to make a comeback.

In November 2019, Atsi launched a re-branded café—Farmer’s Square cafe. This time, she had the support of the international organisation Deutsche Gesellschaft für Internationale Zusammenarbeit GmbH, often shortened to simply GIZ, on its Her & Now project. “The organisation helped me focus, understand business skills, and mentored me thoroughly,” she says.

“This time, I was fully focused on the coffee industry. I started with Lavazza, getting leads from its branch in Dimapur. I was considered one of its distributors in Nagaland. So working with them, I learned so much about business trends and coffee, in general,” says Atsi.

Lavazza is an Italian manufacturer of coffee products, founded in Turin in 1895 by Luigi Lavazza. Initially, it was run from a small grocery store at Via San Tommaso 10. At present, the business is administered by the third and fourth generations of the Lavazza family.

As luck would have it, a mere four months after Atsi’s café reopened, COVID-19 struck. “Out of nowhere, COVID-19 enters my life, and I was also a patient,” chuckles Atsi recalling those days.

Although compelled to shut down again until she recovered, Atsi returned to re-open the café. “As shops selling essential products were allowed to open, I sought permission from the municipal council to sell seasonal vegetables and fruits from Farmer's Square. I got the permission, and that’s how Farmer's Square came to be more than just a café,” says Atsi.

According to Atsi, pineapples are one of Farmer’s Square’s USPs, but it is completely seasonal. Now, Atsi’s daily business activities at the cafe include coffee brewing, customer service and hospitality, supervising operations of the cafe, conducting workshops and training, and so on. Atsi says she is also passionate about encouraging the local youth to engage in farming and learning more about agricultural products.

According to a report by IBEF, India is among the top 10 coffee-producing countries, with about 3% of the global output in 2020. India’s northeast has been traditionally synonymous as a tea-growing region, but in recent years, coffee has found a firm place in the hills.

In Nagaland, Lichan Humtsoe, a fashion photographer-turned-entrepreneur, started Été Coffee to showcase the multiple flavours of coffee sourced from different districts of Nagaland.

Atsi acknowledges the popularity of local flavours, adding, “Nagaland coffee is doing great, and so is Été. But when I came up with my café, I wanted to bring in something different and unique, and that’s how I decided to source the coffee from outside so they can taste the different kinds of coffee from my cafe.”

She continues, “Nagaland is a very small state; we all know one another. So, if I start the same thing as an entrepreneur, it will not be unique, and it will just be a duplicate. I source my coffee from Bengaluru, Delhi, and other places, and I know what exactly I'm giving my customers.”

Atsi employs five others at the café. She has also onboarded one of her friends, a PhD student in agriculture, as her business partner. She says the two invested Rs 50,000 each from their savings to get the café started in the early days.

With Medziphema being a small town, Atsi says, “People get to know of our place through Facebook and Instagram. We are right in the middle of Kohima and Dimapur, so tourists come often. They are often pleasantly surprised to see a café like this, which deals in speciality coffee, in the middle of the highway.”

In the near future, Atsi wants to open a brunch counter in the café, along with a small training centre nearby. Opening a café in Dimapur is also on the cards, she says, but her biggest aim is to open a café outside Nagaland.

(The story was updated to reflect the full name and description of GIZ.)

Looking back to look ahead: Women entrepreneurs take stock and welcome 2023