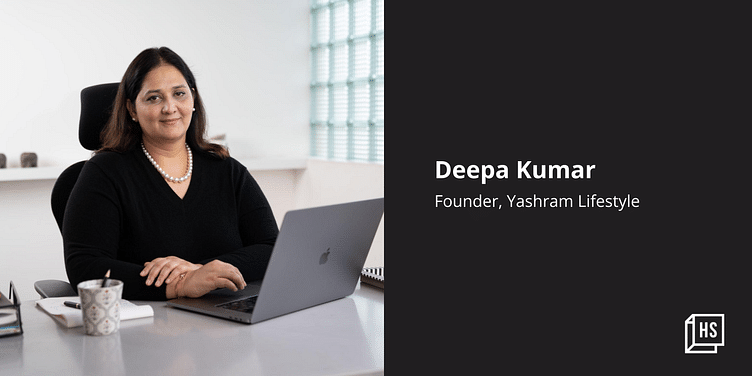 Deepa Kumar is the founder of Yashram Lifestyle that offers a range of innovative maternity and innerwear. She also holds a patent for the ‘period panty’.

Deepa Kumar launched ﻿Yashram Lifestyle﻿ in 2007 with feeding kurtas. These kurtas were comfortable for breast-feeding women to step out with their babies.

Until then, homegrown maternity wear was almost non-existent in India, except for nighties with uncomfortable zippers.

This was the beginning of a series of innovative products for utility wear that sought to address the needs of girls and women when they are at their most vulnerable in their journey through womanhood.

Based in Bengaluru, Deepa completed her engineering degree in telecommunications and worked in an automobile components business before deciding to start up on her own.

The spark, she says, was not to have a business solution, but to start something women needed.

“I thought of a woman’s journey through her life, and facing multiple challenges like I did. I found there were a lot of gaps in what we needed. My requirement was not unique, but it was necessary,” Deepa says.

She elaborates, “Girls go through many bodily changes and it affects them hugely. For example, being able to sit through exams without worrying about period stains, being confident about our growing bodies and have more conversations around body related issues–all these have contributed to my need for innovation.”

Deepa believes we have tucked away these conversations on puberty and adolescence as “taboo” and “awkward” with a lot of women even being shamed if they talk about it.

“There was definitely an interest to address these, not only in terms of product offering, but also through services; being able to talk about it more openly, which make people feel confident when they are most vulnerable,” she says.

When a woman’s body changes during pregnancy and childbirth, she needs both outerwear and innerwear that’s both comfortable and convenient. Yashram’s brands include Morph Maternity (maternity wear), Adira (period panty, starter bras and camisoles, shapers, sleep and lounge wear and incontinence underwear for women), and Pristine Life (men’s and women’s underwear).

“During pregnancy and childbirth, your breast size increases, and you are more prone to UTI, and after giving birth, you are breastfeeding. The needs are very unique and our aim is to offer products that help a woman through this journey,” Deepa adds.

In 2009, Deepa received a patent for the invention of ‘sanitary undergarment,’ which is popularly sold under the product name, ‘period panty’. It is patented in India and the US and costs Rs 913 and above for a pack of three.

The product came out of Deepa’s passion for innovation. She explains, “It was not just about making a leak-proof undergarment, but to make sure the sanitary pad doesn’t shift or move. We are not looking at a bleed-into panty, but one that makes a woman comfortable to be on the move.”

The incontinence underwear also arose out of the need for women, especially over 50, to deal with incontinence. Adira offers hygienic underwear, anti-microbial, anti-fungal and odourless, which is absorbent and leak-proof.

Understanding what girls and women want–being comfortable with their bodies–is at the core of Deepa’s diverse innovations.

Adira also offers camisoles with cups for girls before they transition into wearing regular bras–so that they are comfortable during puberty.

Having started Yashram in 2007, way before the ecommerce boom, the products were sold through retail stores.

“I think with ecommerce and social media, the power of communication is in our hands. That’s a huge advantage,” she says.

Deepa admits there’s been a lot of competition lately in this segment, but Yashram’s biggest advantage comes from innovation.

Her aim is to create an ecosystem that can constantly innovate.

She declares, quite emphatically, “We are not a brand story. Yashram is a product company. We have taken our time to mature and see how we can make our products better. That was very important for me to focus on, in terms of building a DNA for innovation.”

And, that’s also the reason, Deepa points out that despite having launched in 2007 as a MSME, the company’s ARR stands at Rs 10 crore.

The company has two manufacturing units in Bengaluru and Yemmignur, Kurnool District, Andhra Pradesh. It produces 60,000 units in a month, and out of 35,000 units sold, 80 percent are sold online and others through distribution agreements and B2B orders.

Apart from creating comfortable clothing for people, the team at Yashram also runs a social project called ‘How to Tell Your Child’.

It is a global online platform that offers tools to parents and instructors enabling them to have non-awkward conversations with children about puberty, sexual abuse, and more in a completely honest manner so that they can gain confidence in their bodies in a positive way.

The series of books and videos are licensed by schools and NGOs across the world and have earned a spot with UNESCO and The Women's Museum in Hanoi.

Deepa points out that there’s a vulnerability in parents to talk to children about puberty.

“The best way to break the barrier was to create videos that parents can watch with their children without feeling awkward. It opens up conversations, and when you have had one tough one with your child, she will reach out to you for the next one,” says Deepa.

As an early entrant in the startup ecosystem, did Deepa face specific challenges as a woman entrepreneur?

“I think both men and women have challenges. But I do think women do get a lot more attention than a man does. We have that upside; so I think playing to only the downside is not a good thing. It’s not only about gender. It depends on where you come from, what kind of access you’ve had to education and other things. I am not saying one should not celebrate women entrepreneurship, but we should also celebrate us as people who want to do their own thing,” she says.

As for the future, Deepa is looking forward to add more innovations to Yashram’s range and has filed a patent for a unique product, details of which she promised to reveal soon.