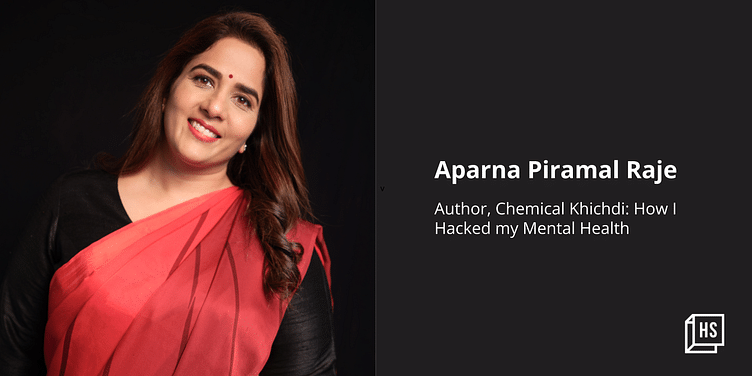 The author of the Chemical Khichdi: How I Hacked my Mental Health, Aparna Piramal Raje, tells HerStory about living with bipolar disorder and the importance of normalising the conversation on mental health.

In 2019, nearly a billion people, including 14% of the world’s adolescents, were living with a mental disorder.

According to the WHO, social and economic inequalities, public health emergencies, war, and the climate crisis are among the global, structural threats to mental health.

COVID-19 was a major contributor to mental health problems, with depression and anxiety going up by more than 25% in the first year of the pandemic alone. But it also brought change, blowing the lid off mental health issues and creating awareness.

However, a lot more needs to be done, and no one knows this better than author and columnist Aparna Piramal Raje.

Keen to accelerate positive dialogue around mental health, Aparna, the elder daughter of VIP Industries’ Chairman Dilip Piramal, released her book, Chemical Khichdi: How I Hacked my Mental Health, in early May.

In this book, part memoir, part reportage, and part self-help guide, she reveals her experience with bipolar disorder and how she came to terms with it. Aparna hopes her book will help change the perception of bipolarity and mental health conditions in general.

Chemical Khichdi begins with Aparna’s admission of having lived with bipolarity for over two decades and focuses on the fact that one can be happy, successful, and bipolar – and achieve their dreams.

“This is why I reveal my vulnerability in all its misshapen glory,” she writes.

Bipolar disorder, earlier called manic-depressive illness or manic depression, is a mental disorder that causes unusual shifts in mood, energy, activity levels, concentration, and the ability to carry out day-to-day tasks. The condition can be managed with medications, talk therapy, lifestyle changes, and other treatments.

Aparna says these emotions are like the ups and downs that most people experience on a normal day, but much more intense.

An MBA from Harvard Business School and a student of the University of Oxford, Aparna was the CEO of BP Ergo, a furniture company. She also wrote a column on leadership for the business newspaper Mint.

Her first book, Working out of the Box, a book on the lives of 40 progressive leaders, explored the connections between their workspaces and working styles and was released in 2015.

In 1999, she co-authored Business Mantras, with Gita Piramal, Radhika Piramal, and Mukesh Beriwala.

Aparna has split her book into three sections: a memoir that delves into her story for the last 20 years, the second section talks about seven therapy that acted as her guide to get better and an eye on the future.

Born in 1976, Aparna reminisces the first time the issue cropped up. It was 2000, the summer before she was supposed to join Harvard Business School.

“The first incidence of my mood swings started more than 20 years ago. At that time, there was no awareness. It was more likely to be seen as a personality issue rather than a mental health issue,” Aparna tells HerStory.

Aparna visited a therapist “who was very helpful” and continued seeing her for a long time. “She was not keen on the whole idea of bipolar; I didn't like the label either. I started getting medication about nine to 10 years ago. That's when I formally accepted the diagnosis,” she says, retracing her journey to acceptance.

The author says therapy is a very important part of the healing process, and should not be limited only to people dealing with mental health conditions but be provided to all.

“I would advocate therapy for everyone because I think it's nice to have somebody that you can talk to, someone who's not judgmental and will give you good advice. That doesn't mean you have to be wedded to the same therapist your entire life,” she says.

Aparna has worked with three therapists at various stages. The first helped her get an understanding - to understand herself, to make friends with her emotions, and the whole idea of how to deal with so many emotions.

She says her second therapist helped her with understanding what bipolar is as a condition and how to learn to live with it. The therapist she is working with presently gave her “a fantastic vocabulary to understand myself”.

“I think we all evolve and grow at a period of time,” she adds. “Medication is going to prevent certain chemical imbalances, but it's therapy that really helps you understand the root causes of why things happen.”

Beyond therapy, Aparna says allies are an important part of the healing and recovery processes. They offer a safe, stable environment and ensure non-judgemental conversations.

The author believes mental health is a team sport, which makes it important to know “whose team you're on and who's on your team”.

She says her book club and writers club were huge support when she was writing.

Aparna recalls that she was introduced to her first therapist by her aunt 20 years back. When it came from somebody who knew, both she and her parents were ready to give the treatment a shot.

“This shows that it is important to find somebody within the system that will listen,” she says.

In the book, Aparna has attached a letter from her doctors that said, “she has a normal personality”. “I felt so validated and relieved because ultimately it meant that something was not wrong with me; something was wrong with my brain,” she says.

“That needs to get fixed but that's not all of me, that doesn't define me. It's part of my identity, yes, but it's not my only identity,” she adds.

Aparna says these days there is some understanding of depression and anxiety, the more common mental health conditions.

“People don’t have awareness of specific conditions like bipolar, which is seen as a more serious mental health condition and affects only 1% of the population.”

People are still not comfortable with many aspects - getting a clinical diagnosis, understanding what the condition means, taking therapies, living with it, and being open at work.

High costs often put therapy beyond the reach of many, but options like helplines and non-profits now offer therapy.

A few therapists are willing to work on a sliding scale payment system where one can pay based on their ability to. Her book also mentions a few companies and NGOs who work on providing therapies and gives a shoutout to a rural community-based programme where champions are trained in mental health issues and provides counselling.

“All these options are beginning to be available. Of course, given the size of our population and the needs, it's never going to be enough. What we will really need is the state to step in to provide the resources that are actually needed,” she adds.

Aparna, who has been wanting to write this book since 2015, says it wasn’t an easy task. “I had to be in a place where I was stable.”

Every chapter took her back to that time and those feelings.

The only way to proceed was by finding a place where she was stable enough to “feel a sense of detachment from the material”.

“The most important thing a writer needs is a sense of detachment where you can write about the time, picture it, live it and relive it without the impact of dealing with it and remembering it as memories,” she says.

Aparna says it has been more than four years since she had a manic episode, adding that she used the seven therapies mentioned in her book to “keep stable”.

A community space for mind-melding: Jodhpur-based The Book Cafe is more than just about coffee or books

COVID has been a huge game-changer, transforming the narrative around mental health issues. It allowed for the rise of new treatment formats such as online therapy and online group support and led governments and companies to take the matter seriously.

The author feels mental health is “intersectional” as it transects many other spaces such as education, gender, economic opportunities, and more. When looked at from this perspective, the view on mental health will change and help further normalise conversations around it.

Aparna, who completed her book during the pandemic, says she was praised for her courage in writing the book - an indication of the stigma that surrounds mental health.

“When there's no need for the word courage, that will show how much we have worked in understanding mental health,” Aparna ends.