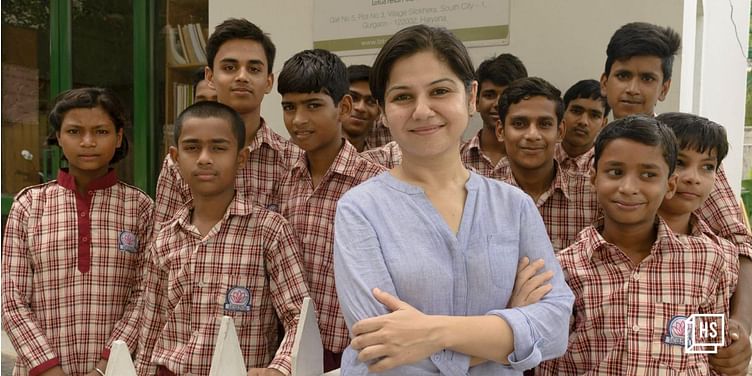 Founded in 2011 by Kushal Chakravorty and Saloni Bharadwaj, Gurugram-based Lotus Petal Foundation is enabling the urban poor to envision a better life for their children. The Foundation has two campuses in Gurugram that focus on nearly 1,400 children from the city's slums.

Seventeen-year-old Gudiya Kumari lived in a Gurugram slum along with her parents and four siblings. Her father worked as a car cleaner and her mother was a domestic help.

In 2016, when Gudiya first joined the Gurugram-based non-profit organisation Lotus Petal Foundation’s (LPF) school, a quick assessment found that her learning levels were equivalent of a Class 5 student. She was then enrolled on the Foundation’s tailored programme, Pratishthan Learning Centre (PLC), a fast-track learning programme, which enabled students to complete their Class 6th to Class 10 in three years.

In Classes 11 and 12, she chose to pursue Physics, Chemistry and Mathematics besides a one-year vocational training programme on computer basics, data entry, and internet protocol. Five years later, a confident and focussed Gudiya successfully passed Class 12 in 2021 and got placed in Unify Dots as a QA Tester.

Gudiya is just one of 1,400 students whose lives the Lotus Petal Foundation is changing for the better. Founded in 2011 by Kushal Chakravorty and Saloni Bhardwaj, the LPF started with just seven children from urban slums studying out of a one-room setting. Nearly ten years later, it has two campuses in Gurugram with classes running from nursery to Class 12, 160 staff members, two educational streams and many customised programmes for disadvantaged students from urban areas.

In a chat with HerStory on Teachers’ Day, Saloni narrates how she got involved with the organisation, helped build it into what it is today, and more.

A graduate of the University of Sheffield, UK, Saloni, a journalist, has previous experience working with BBC Radio in the UK, and print media in India. After her education in the UK, Saloni moved to the US where she ran the Cincinnati Fundraising Chapter for Dining For Women. Several years later, when she moved back to India, the idea, Saloni says, was to work in the impact sector where one could see transformation first-hand.

“While studying in England, and then living in the United States (US), I was exposed to very structured and organised forms of non-profits and charity, where it was very easy to find different opportunities to volunteer. When I came to Lotus Petal in 2012, it was one small room in a shopping arcade where seven children used to have lunch on the staircase. Just ahead of it was a part of a slum. In that system was this one-room which had the potential of being a school, so it was definitely love at first sight,” recalls Saloni.

She joined Kushal, a BIT-Mesra and IIM Lucknow alumnus, who had a global role in Ikea before he started an English medium learning programme where children aged around 12 and 14 years could fill the gaps in their own educational journey. The charity he started worked out of a rented room in a shopping arcade near his house, and began with around six children, one math teacher, and three computers.

“Kushal was kind enough to be open and give me the option of whatever I wanted to do in the charity. I began by organising communications, the logo, taking pictures, and putting the place together in a way that inspired people to come and volunteer at Lotus Petal at the time,” says Saloni, who also soon started fundraising for the charity.

One thing led to another, and the organisation grew enough to move into a donated building with about 50 changemakers actively involved as teachers, mentors, counsellors and more. More programmes began taking shape, and neighbouring schools also began approaching the Foundation for help.

Building a school, building an experience

Over the years, the school has streamlined its admission processes to ensure the right children are benefitted. Students need to be from families whose annual income is less than Rs 5 lakh a year, and they should not own a property or a shop. While there is an entrance test for older children, for nursery students, the school makes sure to meet the parents to understand if they are serious about educating the children all the way through Class 12.

At school, the students are given breakfast and lunch, “because we also want to ensure that they're getting nutritious meals. When the protein intake is proper, the cognitive learning is taken care of,” says Shruti Saxena, Donor Development, LPF. Although the school initially started off as a free service, it has now begun charging a token fee of Rs 14,000 annually.

“The actual expense that we incur on each child is close to Rs 60,000 per annum because we give them uniforms for both summer and winter, shoes, school supplies etc. However, we realised that when you keep giving everything for free, there is no value for it, and that’s why we introduced the fees. The academy has made sure the fee is refunded in some way. For example, for every PTM (parent-teacher meeting) that the parents attend, a certain amount of money is refunded back to them. This ensures parents also attend the PTMs and are aware of their ward’s progress,” says Shruti.

Being a school for the underprivileged comes with its own set of issues beyond the usual. Saloni says along with learning, a lot of unlearning takes place as well.

“Many girls had learnt from their communities that during menstruation, they aren’t supposed to go out. Superstition and belief had already crept into them. So we decided to start talking to the children when they are in Class 4, when the body starts to change, to create awareness of menstruation and puberty,” says Saloni.

Mental health is another area that the school is particularly focussed upon. “Many of the students come from difficult household backgrounds and have been exposed to a lot more issues than regular children face by the time they reach a certain age. We have three to four counsellors who are available at any given time for the students to talk,” says Kushal, adding that the school’s focus on sports, art, theatre, and the overall holistic development helps the children assimilate themselves better into the mainstream society.

“Nobody talks about the mental well-being of a child growing up in the slum. How do you know the child is not suffering from a disability, mental health trauma or just plain lack of aptitude? We are talking about communities that cannot afford to record the growth of their children, that do not understand milestones. Which is why, we emphasise a lot on mental wellbeing, child nutrition and a well-rounded learning experience,” adds Saloni.

While empathy is at the core of any charity work, empathy for charity workers is something that needs to be considered too, feels Saloni.

“We work with our teachers and academic team on their self-care because, often, what impacts them is not something that’s happening in the class, but something that is happening to the child when he/she leaves the class. That is the stress that teachers working for underprivileged communities generally carry home and to their personal lives. The interventions for our academic team are meant to tackle such stresses,” Saloni says.

The charity has consistently been certified by the global authority on workplace culture, Great Place to Work.

The school has about 59 alumni so far, out of which almost 49 are either employed or pursuing their higher education. While the school’s original campus in South City, Gurugram is on a lease, a second, bigger campus focussing on secondary education is nearing completion in Dhunela, Gurugram.

The school, set on a five-acre land gifted by an individual donor, will be CBSE affiliated with facilities on par with private institutions.

Since last year, the school has also started an e-learning module through which teachers from the foundation stream classes to government schools or other public schools where teachers are unavailable. These classes are now available in five states including Jammu, Rajasthan, Orissa, the NCR region and Uttarakhand. The school plans to soon scale the digital learning facilities to more states.