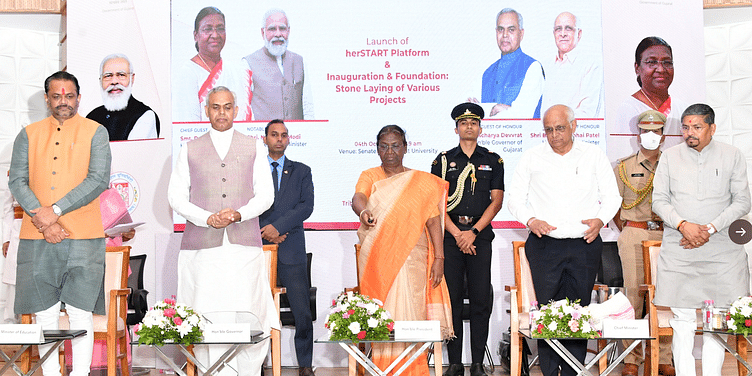 According to details available on the Gujarat University Startup and Entrepreneurship Council (GUSEC) website, the herSTART platform will support women entrepreneurs in helping their innovative ideas take off, and will also feature a digital platform to provide resources and training modules free of cost to aspiring women entrepreneurs, a digital community, and a digital publication to spread their success stories.

The platform will also include the herSTART Incubator, a dedicated full-fledged startup incubator for women entrepreneurs and innovators; and the herSTART Accelerator, a round-the-year accelerator programme for high-impact women-led startups, both of which were launched by the President.

The applications for the accelerator will open in October.

India's rank in the Global Innovation Index has risen from 81st to 40th, President Droupadi Murmu said at the event.

"I am informed that this university has over 450 startups. Out of this, over 125 are headed by women. It is a matter of pride for me to inaugurate the herSTART platform. This will be a bridge for budding entrepreneurs with government schemes and private funds," she said.

"Recently, in the Global Innovation Index 2022, India, which was at 81st position earlier, has come up to the 40th position," she further said, underlining the importance of startups. Startups will help create new jobs too, she added.

India was ranked 81st in the 2015 Global Innovation Index. Its rank improved to 40th in the latest rankings.

Murmu on Tuesday also inaugurated or laid foundation stones of various projects related to education and tribal development which included Sainik School, tribal hostels and schools in remote areas of the state.

He said, “The inauguration of herSTART platform by Hon’ble President Droupadi Murmu is an honour for Gujarat University and GUSEC. Women have an untapped entrepreneurial potential which we are trying to channelise through various targeted initiatives. The herSTART platform is another step in that direction and we are confident it will encourage more women to launch startups and turn their ideas into reality.”

President Murmu felicitated 10 women-led startups and entrepreneurs who have been creating an impact in their own space through innovation and entrepreneurial interventions, and are supported by Gujarat University and herSTART.