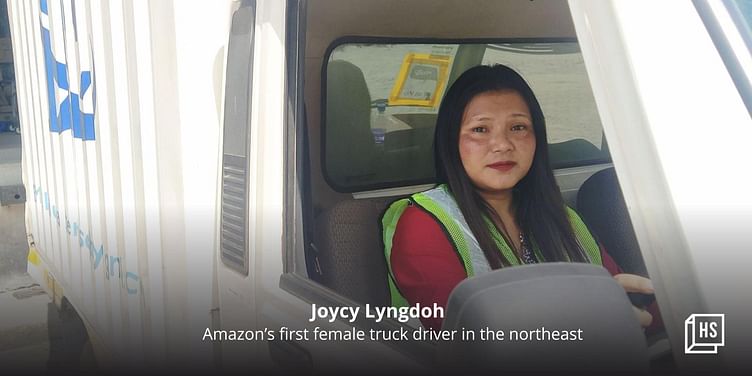 Joycy Lyngdoh is Amazon’s first female truck driver from Shillong, Meghalaya. From being a daily wage earner to a trucking partner with Amazon, Joycy’s inspirational story is motivating other women in the region to take up truck driving as a serious profession.

It is 2022, and the thought of a female truck driver still stuns many of us. Redefining gender stereotypes is one thing, but redefining the rules of the highway is a different matter, which is why there are few women in this predominantly male-dominated profession.

Thirty-five-year-old Joycy Lyngdoh from Meghalaya, the first female truck driver with ﻿Amazon﻿’s trucking partner in India, is redefining stereotypical gender roles. A seasoned professional with over six years of driving experience, Joycy took to truck driving to earn a living, and this has indeed motivated many other female drivers in her community to turn their love for driving into a profession.

“As someone who grew up in the region, I was very familiar with the routes and passes here, and I did not find it difficult to drive a truck here. In fact, it is a matter of pride for me now,” Joycy tells HerStory.

For a long time now, Joycy has been the only breadwinner for her family, responsible for her mother and three younger sisters. After completing her education, Joycy worked in several companies in Guwahati, including a steel company, and as a store manager at a local shop to make ends meet. Although a daily wage earner, she eventually learned to drive with the help of friends, and realised that besides enjoying it, she had a good sense of safety.

Thus, she began driving a school bus, and continued to work as a part-time driver at various other places across the city. Her passion for driving led her to enrol with Amazon’s trucking partner as a driver, and much to her delight, she got selected. Joycy is now one of Amazon’s truck drivers for deliveries in and around Guwahati.

“I love being out on the road, travelling to different places, and meeting new people. This opportunity inspired me to pursue my passion for living a self-sufficient life. My advice to women who want to pursue driving as a profession is that if you believe in yourself, new opportunities will open for you,” says Joycy. She adds that although the profession is male-dominated, she never feels judged, and in-fact, enjoys the respect that she gets due to the nature of her job.

When asked about her long-term plans, Joycy says she’ll take each day as it comes, but the primary idea is to continue with the ecommerce giant for a long time.

Building on its commitment to Diversity, Equity, and Inclusivity (DE&I), Amazon India has been consistently putting efforts to increase female participation in the workforce and fostering diversity in the logistics space.

Does Amazon make it easier for a woman to be a trucker, given the obvious challenges? Venkatesh Tiwari, Director of Middle Mile Operations, Amazon India, says, “Amazon facilitates the trucking partners to secure health and accident insurance benefits by engaging directly with the company’s preferred insurance providers. Further, it has enabled drivers through technology-driven solutions for safe driving and to move packages efficiently by guiding them on navigation, on-time movement, and reporting delays and disruptions while moving from one location to another. The company also has programmes on driver safety training, which provides dedicated road safety ambassadors at each of the Amazon sites, providing training to drivers on important aspects of road safety and inspecting vehicles per week on visually inspectable parameters.”

“While Joycy is the first female truck driver with our trucking partner, Amazon has partnered with over 500 trucking partners in India, who in turn create job opportunities for thousands of trucking drivers,” he says.

Long hours, unearthly schedules, rough working conditions, and safety are just some of the issues plaguing truck drivers in general, which keep more women from taking up truck driving as a profession. Given the circumstances, it is inspiring to see both women and corporates begin the journey of a thousand miles with some simple steps.