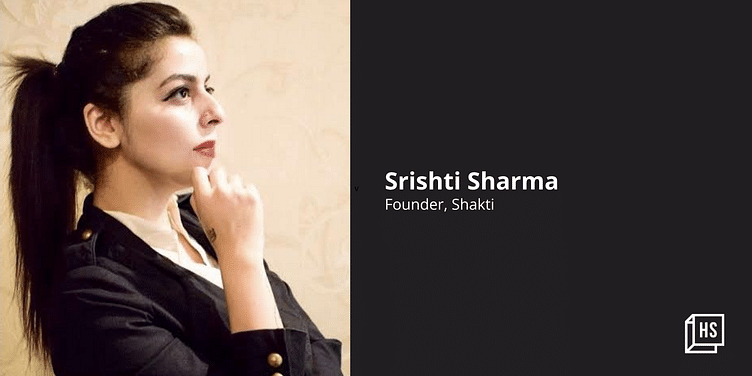 Srishti Sharma has developed Shakti, a wearable device for women that electrifies an attacker when the user presses the button twice. It also sends your last detected live location to your nearby top three contacts via WhatsApp and text message.

A serial entrepreneur, Shristi Sharma, like every other woman in the country, was deeply affected by the Nirbhaya incident and wanted to innovate for women’s safety.

“I had heard about companies like Leaf Wearables and Electro Shoe making products for safety. But they were only providing SOS services that were not entirely feasible if a woman was being attacked. Also, not all women carry pepper sprays,” she says.

Along with an R&D team, Srishti started working on ﻿Shakti﻿, a wearable that could protect a woman physically, especially when she is threatened with rape, domestic violence, or is eve-teased, where a SOS service really does not come in handy.

Launched recently, the wearable comes in the form of a bangle that electrifies an attacker when the user presses the button twice. It also sends your last detected live location to your nearby top three contacts via WhatsApp and text message.

Social causes have always been a part of Srishti’s life since she was a teenager. When she was less than 18-years-old, she came across a young boy selling English newspapers to passing cars near her college in Delhi.

She discovered that the boy was interested in learning English, but had had no formal education. When she enquired why his family didn’t send him to school, they said they were continuously denied admission.

“I knew that every child had a right to education under the RTE Act (Right to Education under the Constitution), and approached the principal of a government school nearby. She refused outright saying that they were children from the streets, used foul language, and were not fit to be in a school,” Srishti recalls.

In fact, the principal questioned her motive and asked if she was doing this for media attention.

Not one to be put off by rejection, and not just persevere, she decided to take the matter head-on.

“I went back to the school and told the principal that under the RTE, children had every right to study in a government school and I would file a police complaint if she refused. Reluctantly, she admitted 13 children from the nearby slums,” says Srishti.

However, to her dismay, eight out of the 13 children dropped out in 15 days because the education system is so flawed, that a child is put in the fifth standard directly, and without a basic education, finds himself at sea.

This is when she decided to start Project Kilkari in Delhi with her collegemates to help children from marginalised and underprivileged communities to get admission into schools, and simultaneously ensure that they are equipped with a basic education that allows them to continue in schools without the fear of dropping out. It is currently working with over 18 schools in the city in collaboration with NGO Seva Bharati.

In between all this, Srishti pursued her Economics (Hons) from Delhi University and also studied for her Actuarial Science exams. Her parents insisted that she try for regular jobs. In her stints as an intern, and later as social media manager for organisations and at co-working spaces, she picked up a lot of information about starting up, valuation, and pitching to investors. She would come back home and watch YouTube videos on all the terms she had learned during the day, making the whole process self-taught.

After Project Kilkari, she started Project Rehmat that works on the rehabilitation of manual scavengers by providing them with alternate employment opportunities. It was a project initiated by eight girls from her college, which they then passed on to their juniors after taking an exit.

She was also an equity holder in Binge Digital that was acquired by Dineout in 2018. In October 2020, she started Game, an esports platform that helps aspiring gamers to build their careers in the space.

The making of Shakti

Srishti’s latest project, Shakti, took 12 months to design. It is a wearable device—a bangle a woman can wear every day. If attacked, one just has to come into contact with any part of the skin of the attacker (for 5 seconds), double press the button to emit a light electric current that would disarm him immediately, apart from sending an SOS message to emergency contacts.

Srishti elaborates, “Once the current is emitted, he is disarmed for 120 seconds and it takes him 30 minutes to come back to normal. This gives the woman time to call somebody, escape or deal with the situation on her own. The wearer is not harmed in any way, and is insulated by the device itself.”

The current applied here is ‘square current’ and does not cause any permanent harm to the attacker. Shakti is manufactured by a third-party manufacturer in Gurugram where Srishti also leads a team of eight.

She has also received approval from the Women and Child Department, Government of Delhi, that will help her launch Shakti on a larger scale. The device will be available on its own website, and ecommerce marketplaces as well.

The idea is also to make it a B2B brand by partnering with NGOs, schools, colleges, and other institutions. Currently priced at Rs 950, Srishti hopes to make it available for NGO distribution in slums and villages for around Rs 650. All these, she says, will depend on bulk orders.

Bootstrapped so far, Srishti is looking for external and VC funding. The team won Rs 3.6 lakh grant from NIDHI EIR of the Gujarat government.

“We are looking forward to greater government involvement so that it will help in the wide-scale distribution of Shakti,” she says.

Srishti believes women don’t need to be empowered, they already are.

“Societal perspectives and perceptions pull women back. Just give them the right tools and set them free. This is what we want to do with Shakti,” she concludes.

Tips for working moms to balance work and family

With Cover Story, Manjula Tiwari is putting an ‘Indian spin’ to fast fashion