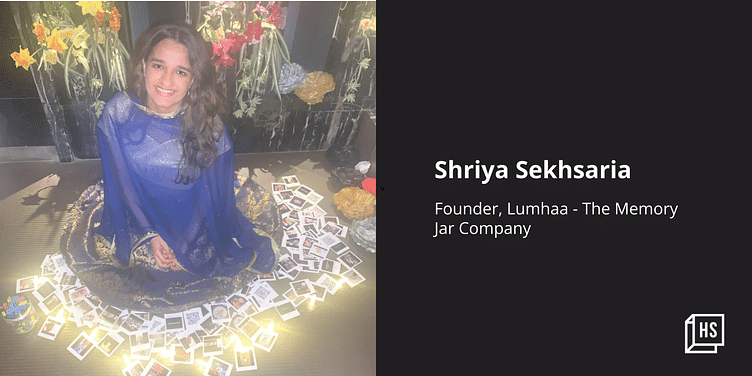 Shriya Sekhsaria founded Lumhaa – The Memory Jar Company to help users file their memories in digital memory jars. It also offers a catalogue of “physical products” made by local artisans.

In 2015, Shriya Sekhsaria was writing a non-fiction book on terminally ill children in Indian villages to raise money for their treatment.

Unfortunately, a few of the kids passed away before the book was published. Shriya, to help the grieving families, filled empty glass jars with printed and handwritten stories and memories the children had shared with her and sent them out to the families. The result was astounding. Even five minutes with these stories, presented as “memory jars”, helped the families cope with their loss.

“My work with children and wanting to document their stories meaningfully gave rise to memory jars. My subsequent experiments in psychology gave rise to the company around them,” Shriya tells HerStory.

The entrepreneur realised that these “memory jars” boosted all six counts of psychological well-being—autonomy, environmental mastery, personal growth, positive relations with others, purpose in life, and self-acceptance.

This led to the Coimbatore-based entrepreneur launching ﻿Lumhaa﻿ – The Memory Jar Company in 2018, a platform that lets users build digital memory jars in four simple steps.

Shriya says, “I care about people being happy with their ‘inner scorecard’, which usually happens through self-reflection. To make this type of reflection fun and joyful, we focus on shared reflection, e.g., both partners posting about their relationship for each other in a ‘couple memory jar’, or all family members posting memories for a child in a baby memory jar.”

The vision is to have a shared reflection be a part of everyone’s lives, whether via the memory jars on the Lumhaa app or by playing reflection-based card games.

“We’ve started with the app and a few physical products but will eventually scale to multimodal physical products (e.g., a 3D model of your kitchen with the smell of homemade tea) and immersive memories (e.g., a recreation of your wedding your kids can walk around in),” explains Shriya.

A digital memory jar can be built in five steps on the Lumhaa app/website.

Step 2: Add memories (fun prompts are available to guide this, memories can be in any file format).

Step 3: Invite others to add/see memories in jar.

There is also a fifth but optional step: Get physical products customised with your memories.

“For example, brass family trees, t-shirts, books, jars, etc., can be customised with your memories. The physical products focus on sustainable materials and support local art forms/artisans,” she adds.

Mind of a tinkerer

Shriya describes herself as a ‘tinkerer’.

“I come from a family of tinkerers, whether it’s my grandmother playing around with lemongrass and turmeric in the kitchen or my father and grandfather staying up all night to build their cotton business,” she says.

Since her childhood, she has adorned several hats. When she was in the sixth standard, she won a design competition organised by Reebok, following which her designs were selected by the brand for a line of jerseys.

Then, she wrote her debut novel, One, when she was just 15.

She did her bachelor’s in Psychology from Princeton University, US, and for her final year thesis, she focused on building a tech platform that “could make us feel good about ourselves.”

After working with Goldman Sachs for a year, she also built and exited a startup that assesses cognitive dimensions using scientifically validated tests to quantify, explain, and predict performance across industries.

Shriya is also an avid sportsperson and has won gold medals in archery at the national level.

Document every moment, every memory

People have used Lumhaa for a variety of reasons. Shriya describes some popular use cases.

For yourself: Start a jar in January post one thing that makes you happy every week and look back on your amazing year in December.

For loved ones: A jar when your baby is born, adding milestones/photos/videos over the years, inviting other family members to add to it, and then gift the jar to the kid when they are old enough.

For communities: A family tree, or school memory jars.

For occasions: A birthday card where friends/family add their birthday wishes and a link with all wishes stays forever.

Lumhaa has users from over 190 countries and was ranked among Apple’s Top Social Apps in 90+ countries. This January, it even placed above Facebook in Apple’s UK charts.

Its users range from four-year-olds to 99-year-olds, but most tend to be American, or Indian, or British women in their 20s.

“As for [B2B] clients, we target schools across India, usually CBSE in Tier II [cities], to help make memory jars/anecdotal portfolios for every student to keep forever,” adds the founder.

The platform makes money in two ways: physical products (from Rs 75 to Rs 1 lakh), and contracts with organisations at a starting price of Rs 1,000 a month. For individual users, services are available free of cost.

While its most obvious competitor is Google Photos, she adds that Lumhaa is a multimedia diary rather than a photo dump.

Realistically speaking, she says, its biggest competitor is future discounting. She explains, “A future you wants journals and scrapbooks of memories, but the present you would rather watch YouTube. So, most moments end up undocumented (or lost in the cloud).”

Lumhaa has received funding from Princeton University and a few angel investors. The founder declined to disclose current revenues.

According to Shriya, Lumhaa’s growth started becoming significant when users helped redesign the product based on what they liked.

She faced her biggest challenges during the pandemic. Clients were unable to pay her, and shipping and supply chains broke down.

“But every person on our team tried to maximise their impact. Our tech team built out a location-specific memory jar where people could anonymously seek and provide localised Covid-related resources when they heard that people who were sharing their contact info when asking for help were being harassed,” she says.

Going forward, Shriya would like to add modalities like taste and smell into physical products and tinker with immersive memories.

“We want to keep making the world a happier and more self-fulfilled place to live in,” she concludes.

12 quotes to help girls realise their dreams at any cost