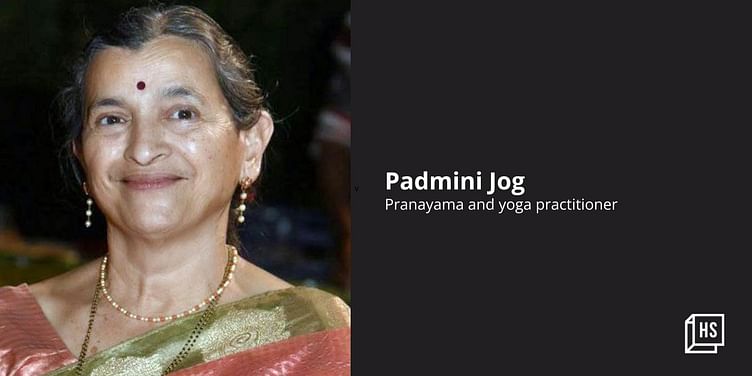 After her husband passed away, Padmini Jog decided to continue the journey they had started together. She conducts yoga camps for army, navy, and air force soldiers and school students, introducing them to asanas and pranayama.

At 78, Padmini Jog travels all over the country to conduct pranayama and yoga camps, free of cost. In September this year, she travelled to border areas to impart training to jawans in the Armed Forces.

Till 2005, Padmini was content with travelling all over the country with her husband, Lt Col Pratap Jog, an officer in the Indian Army. Initially, she was a homemaker taking care of her two children. Later, she pursued a Montessori course and began teaching in schools in places where her husband was posted.

Born and raised in Bengaluru, Padmini completed her Senior Cambridge from London University and has a BSc in Home Science from Maharani College.

Yoga and pranayama came into the couple’s lives after Lt Col Jog retired and they moved to his hometown, Nagpur.

“My father-in-law regularly practised yoga and watching him, my husband would do so too. I was busy looking after my family. However, after this retirement in 1983, we attended a Yoga Abhyasi Camp in Nagpur, passed the relevant exams, and began teaching others,” she says.

Little did they know that it would soon become their life’s mission to impart yoga and pranayama training to thousands of people all over the country, including officers and jawans in the Armed Forces.

Couple with a singular mission

In 2004, when Padmini was practising her yoga asanas in the bedroom and her husband in the living room in front of the television, a programme by renowned yoga guru Baba Ramdev was being aired. The ticker advertised a teacher’s course in Haridwar.

“I thought let me finish my asanas and ask my husband. At the same time, my husband wanted to ask me if we should go,” she says.

The couple attended a teacher’s camp in yoga in Haridwar and directly received training from Baba Ramdev. On their return to Nagpur, they received a call to conduct a camp at Sehore near Bhopal in Madhya Pradesh.

“We went there by train and the organisers received us with a lot of warmth and affection. They had advertised about the camp in the village and 400 people turned up in the morning and 200 women in the evening,” she recalls.

Padmini wondered how she could talk in front of the crowd, but her husband allayed her fears.

“Till then I was used to talking in front of 20-25 people. And here, there were people in thousands. My husband told me to focus on the subject matter, not look into anyone’s eyes, just concentrate on the infinity and do my work,” she says.

The duo became a formidable team and fell into a rhythm – when Lt Col Jog demonstrated the yoga asanas and pranayama, she would explain the process and vice versa.

The couple conducted these camps free of cost – only asking for travel tickets and accommodation. They started travelling all over India conducting camps from Monday to Friday every week, for civilians, schools, colleges, old age homes, the Rotary, and senior citizens. Their main camps were also at Army, Navy, and Air Force bases and at police centres (CRPF, SRPF, BSF, and ITBP). These included everyone at the bases and also schools in the vicinity like Kendriya Vidyalayas and Army Public Schools.

“After returning to Nagpur after a camp, we would sit on the swing in our garden and discuss how we could conduct the next one better, what we could add and delete,” Padmini says.

Yoga is like my soulmate and running my passion, says yoga trainer and marathon runner Shruthi Jain

Padmini recalls the day clearly. “It was September 5, 2014, and we had been felicitated by the School of Scholars in Nagpur after a camp in the morning. In the evening, my husband had a bout of vomiting and we took him to the Army Hospital. The doctors told us he had a heart attack the previous day.”

Lt Col Jog was surprised and asked the doctors how that was possible as he had been practising yoga and pranayama for years. The doctors told him the routine had delayed his heart issue by 20 years. He passed away the same evening.

For a month, Padmini did not think of the future. She had asked her son to postpone the camps they were committed to. But she soon decided that she would do it alone.

“I decided to conduct a camp at Army Public School in Bengaluru. It was camp 562 and since then, there has been turning back,” she says.

Till then, her husband had been looking after the administration, but Padmini soon learned to not only teach alone, but also travel and stay alone.

Till date, she has completed around 940 camps and in September this year, travelled to the border areas in Jammu & Kashmir to teach jawans.

“From September 17-28, I travelled to 11 locations in the border areas of Jammu & Kashmir, teaching yoga and pranayama for two hours by day and sleeping in a different place each night. Each time, we were travelling higher up, and the highest was 12,300 ft above sea level,” Padmini shares.

For physical and mental wellbeing

“Jawans live in a stressful world and said practising these every day brought them calm. I also give audio files whenever requested, so that they use it every day.”

She explains why it’s important to incorporate pranayama and yoga into our daily routine.

“We sleep, bathe, eat every day. All we need is half an hour of pranayama and 10 minutes of yogasanas for physical and mental wellbeing. First, you need to have the faith in yourself to carry this forward. You don’t need any special clothes or equipment, just a 3 by 6 space and the will to do it,” Padmini says.

On how pranayama and yoga differ from other forms of exercise, she says “you feel rejuvenated and energised”.

She wants to continue to conduct camps as long as she is able to, and as long her body allows to.

“Prayanama works at the root level and activates all eight chakras in our body. You will become fit, physically; you will be alert mentally; people will welcome you socially; and you will grow spiritually. It’s like prayer for me,” Padmini says.