DISABILITY GAVE ME ABILITY TO LIVE for others. 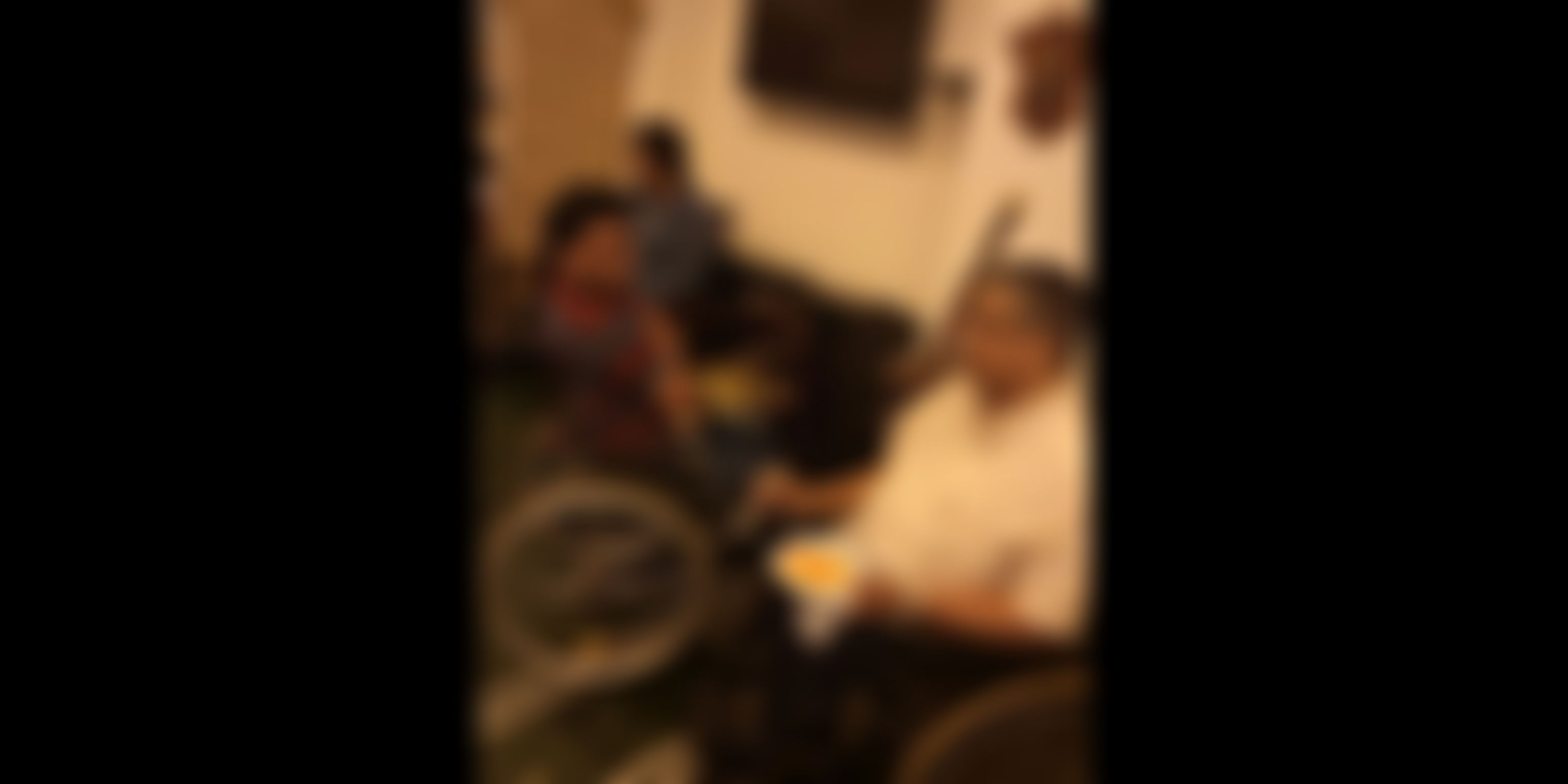 I was born in Bijbehara, a town in the District of Anantnag, in Kashmir, part of India. I grew up in a poor community where most of the people work as small artisans, laborers, and small merchants. Being a member of a poor Muslim family and community, I did not get any special treatment nor good schooling and availability of all things needed during childhood. Thank God, through harsh living conditions I learned a lot and sought perfection to some extent because I believe that it is through such conditions that man learns to be better because nothing can be taken for granted as every gain is through great efforts, enabling better appreciation.

Being a Muslim I followed the principles of Islam, offered Salat – (prayer offered by Muslims) and found Salat as means of attaining peace and protection from sins. After living 21 years of independent life my fate was changed when I was injured in a militancy incident. At that time, my uncle was a cancer patient and had gone to Delhi for a medical check – up, therefore I was accompanying his wife in other words my Aunt and cousin to their residence. At that time my cousin was affiliated to the then ruling party in Jammu and Kashmir – National Conference. Militancy was prevalent and militants were targeting all the leaders and politicians. Consequently, on the night of my uncle’s departure to Delhi, some militants forced themselves into his house. Up to then, I had been living a relatively happy life but unfortunately, on 21st March 1997 at 12:30 AM bad incident occurred in my life some veiled militants entered my uncle’s house and tried to kidnap his son - then leader of political part at block level. I was present at that time and although his family members retaliated, this didn't stop the militants to fire indiscriminately. one of the bullet fired from a close range hit me, thus injuring my vital organs including spinal cord, kidney, liver, liver, spleen and pancreas,. Despite bad situations, my life was spared and after multiple surgeries my right kidney, spleen, a part of the liver and intestine were removed. In addition to that a spinal fixation was done. It is all a miracle, that i still exist in this world.

Before that incident, my parents had hoped I would become the family support. Being the youngest member in the family, I was obedient to the rest of the family and they loved me very much. In my opinion, I was never strong academically. After my first national exam, in class 10, I started to become interested in studying and I was very keen to pursue legal studies. I was very keen to become a law student However; my parents had other plans and wanted me to become a doctor. Therefore, I took medical subjects. The idea did not displease me though because I was fully interested in helping others, at that age, I was a regular blood donor and during my college years, I participated in various types of activities like anti – smoking campaign, eco friendly campaign, integrated Pulse Polio immunisation Program and many more.

Remaining busy with the children of my locality for hours, I overcame the trauma to some extent. I was upset for a long time because of the dependent life I now had to lead. Given my mental state I do not know how mirth eventually came in me to give me the courage to work again. Actually, Dr. Ghulam Rasool Mir, the orthopedic surgeon is a confident and bold orthopedic professional When I wrote him a letter to enquire about the severity of my spinal injury he bluntly replied by saying even a scratch in my cord could take years to heal. I had therefore, only one option and that is that god is the only one who can help and heal any time. Another doctor Dr. Shafi Ladakhi surgeon specialist at SMHS Hospital Srinagar Always said, “God helps those who help themselves”. With both these thoughts in mind I took my life in my hands, forgot my accident, the past and started to live and make the most of my present. Today, I even forget what happened on that terrible night.

. One day, a critical incident really changed my whole perceptive though, I happened to laugh, this had not happened for a very long time, so it was followed by a silence weighted down with puzzlement from the people around me, then all my family members looked at each other and started laughing too, showing sheer happiness This created a dramatic change in my life. I started being happy seeing my mother happy every day and this symbiosis generated more happiness, replacing stress and depression with a real and deeper sense of hope. Although I was not able to move from the year 1997 still I started my new life in my bed by providing free education to those who cannot afford it. The idea came to me when I heard noises of children playing outside my home. As most of the children belonged to poor families, they were not able to afford any forms of education. For once in my life, I realized that the society and in particular my community was accepting me and needed me although I was physically challenged. For further studies the effect was like a snow ball, the courage and enthusiasm teaching generated, encouraged me to pursue my studies by doing two distance certificate course in Human Rights and Computing from Indira Gandhi Open University. Getting even more inspiration and encouragements I started working for the rights of physically and mentally challenged.

It is only by becoming disabled that my vision of the world changed and when I realized the problems the disabled face. I am deeply hurt by the constant social stigma, and the lack of access existing today, whether it is the right to education, employment, health facilities or accessibility. Therefore I started writing complaints to Human Rights Commissions both at state and central levels in my country. One complaint that I filed was concerned with the Government of Jammu and Kashmir (J & K) which was not providing any attention towards leprosy affected people in leper colony situated in Srinagar. The Chairperson of the State Human Rights took the cognizance of the complaint and directed the government to take steps for their rehabilitation.

Once I went on a blood donation camp I saw a young doctor who also had a Bachelor in Social Work I was impressed with the fact that social work existed as a subject. I developed an interest in this area and decided to find a way to do the course. After some research I discovered that a Master’s degree in Social Work has just started at Kashmir University. I passed the entrance exam and finally succeeded in completing the course. I came to know how to use different techniques as a social worker and how to work for the welfare of the physically and mentally challenged. From that very period I was continuously fighting for the rights of the physically challenged and sought moral support from various community leaders and those showing concern regarding disability issues. Because nobody had so far worked in this area, I was successful in filing public interest litigations in J & K High Court praying against the miserable conditions of the physically and mentally challenged in J & K. The first outcome was the drafted policy on the implementation by the Recruitment Board of horizontal reservation for the employment of the physically challenged. In the past the process of employing physically challenged, according to J & K Disability Act was only a myth but the recruiting agencies were extremely discriminatory in this regard, however from then on the enforcement of the act was monitored. Universities and other educational institutions mostly ignore challenges, disabilities and special needs of the students. During my studentship in the MSW course at Kashmir University, I organized the students with physical challenges so they could put pressure on the university’s authorities to address their absent rights. Going from departments to departments and identifying peers was a great source of pleasure and an important part of my life, this enabled me to create bonds for the first time, experiencing life away from my family I built new ties. Our efforts paid off eventually, for example the university started to place ramps at the entrance of seven important buildings including hostels, administrative block, examination block; it was the first time in the history of Kashmir University that World Disability Day was celebrated on 3rd December 2005 and has been continuously celebrated ever since with the participation of intellectuals, policy makers, members of civil societies and lawyers

Working with children gave me the real meaning of life. I would have never with such dedication for the humanity if I would have not met with the attack. Nowadays, I feel myself blessed for what happened to me, a blessing from God and his everlasting kindness. Although I am person with severe disability I live in society at the academic and professional level. I got number of rewards for my perseverance and social actions. 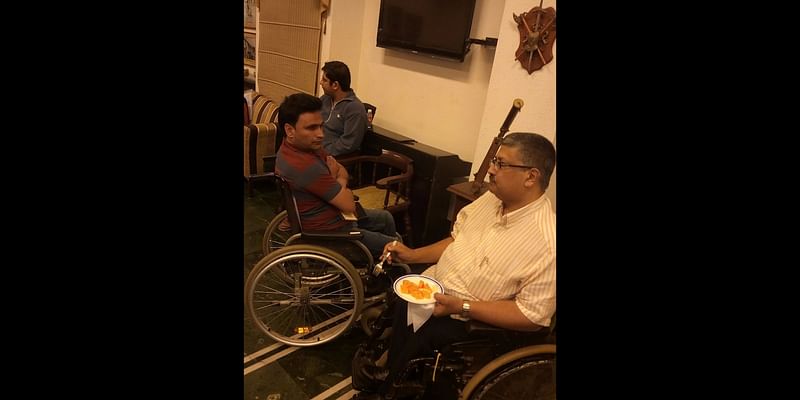 1. Filed Public interest litigation in J&K High Court, which resulted in formulation of Draft policy for the persons with disabilities in Jammu and Kashmir.

2. Filed a complaint against J&K Govt. in State Human Rights Commission for provision of reservations for physically challenged in all in all govt. jobs identified for PWD category, by public service commission and Subordinate services recruitment Board.

3. Filed a complaint in SHRC Srinagar against the Administrators of Govt. silk factory RajBagh Srinagar where the workers were suffering due to the non availability of pay from various years due to old machinery and non availability of raw material. The reaction was that Managing Director J&K industries assured the commission that reengineering of the factory will be done within a limited period of time.

4. on Anti-Leprosy day (30th January–2007) Agitated before SHRC and filed a sue against Social Welfare department for Rehabilitation of desperate people with leprosy living in leper colony Srinagar

5. Made efforts to translate UN-Convention for Rights of Disable People into Urdu language.

8. Filed complaint in SHRC for identification of fake disability certificate holders and provide the job to deserving persons with disabilities through public service commission and Service selection recruitment board.

9. Filed Complaint in J&K State Human Rights Commission for the accessibility in all sort of infrastructure in the state for persons with disabilities.

10. Organized and Participated in rallies, awareness programs for census enumerators to include persons with disabilities in census 2011, supported by census department J&K.