The story is about the challenges and the difficulties faced by a normal aam admi who with his dedication and hunger instinct got up sacrificing his comfot,chacing the love to face with joy and achieve something more in life, have left no stone unturned and asked others ''DO YOU HAVE IT IN YOU''

In life always winning is not important sometimes we have to lose to know the definition of winning and then to know where we are lagging and to extrapolate our inside hidden potential. For some people it is LOVE which make them do whatever they want and not feel it as a burden just to do it with pleasure and touch the sky with glory. Anybody who have ever achieved anything worthwhile has encountered and overcome struggles on their journey, but this part of the process is often left out of the success story, yet is so often the most important part.

There are countless examples to call upon. Sylvester Stallone was forced to sell his life-long friend, his dog, for a reported $50 in order to purchase food for himself whilst he was trying to make it as an actor, despite everybody telling him it would never happen. After he wrote the script for 'Rocky', trying for months to sell it, he was eventually, reportedly offered $100,000 to sell the script to producers, but he refused, as he wouldnt be appearing in the film, just selling the script. He held onto his dream of being an actor, which was eventually realized and his fortune made.

Here is the story about a great person Dhirajlal Hirachand Ambani who is also known as Dhirubai Amabani is a famous business tycoon who founded Reliance Industries in Bombay with his cousin. He figured in The Sunday Times list of top 50 businessmen in Asia.Ambani took Reliance Industries public in 1977, and by 2007 the combined fortune of the family was $60 billion, making the Ambanis the second richest family in the world. Ambani died on 6 July 2002. Ambani started with 1000 rupee in his hand and earned money by working with a firm in Yemen in the 1950s and moved to Mumbai in 1958 to start his own business in spices. After making modest profits, he moved into textiles and opened a mill in Naroda industrial area of Ahmadabad. He founded Reliance Industries in 1966, and as of 2012, the company has over 85,000 employees and provides almost 5% of the Central Government's total tax revenue. As of 2012, Reliance Industries was listed among top Fortune 500 list of world's biggest companies by revenues .A diamond is merely a lump of coal that did well under extreme pressure.So imagine how brilliant a human being can be by sustaining pressures of life.Life’s challenges are not supposed to paralyze you, they’re supposed to unleash your inner strength & help you discover who you are.In 1982, Reliance Industries came up against a rights issue regarding partly convertible debentures. It was rumored that company was making all efforts to ensure that their stock prices did not slide an inch. Sensing an opportunity, a bear cartel which was a group of stock brokers from Calcutta started to short sell the shares of Reliance. To counter this, a group of stock brokers till recently referred to as "Friends of Reliance" started to buy the short sold shares of Reliance Industries on the Bombay Stock Exchange.The Bear Cartel was acting on the belief that the Bulls would be short of cash to complete the transactions and would be ready for settlement under the "Badla" trading system prevalent in Bombay Stock Exchange during those days. The bulls kept on buying and a price of Rs. 152 per share was maintained till the day of settlement. On the day of settlement, the Bear Cartel was taken aback when the Bulls demanded a physical delivery of shares. To complete the transaction, the much needed cash was provided to the stock brokers who had bought shares of Reliance, by none other than Dhirubhai Ambani. In the case of non-settlement, the Bulls demanded an "Unbadla" (a penalty sum) of Rs. 35 per share. With this, the demand increased and the shares of Reliance shot above 180 rupees in minutes. The settlement caused an enormous uproar in the market and Dhirubhai Ambani was the unquestioned king of the stock markets. He proved to his detractors just how dangerous it was to play with Reliance.

The situation was getting completely out of control. To find a solution to this situation, the Bombay Stock Exchange was closed for three business days. Authorities from the Bombay Stock Exchange intervened in the matter and brought down the "Unbadla" rate to Rs. 2 with a stipulation that the Bear Cartel had to deliver the shares within the next few days. The Bear Cartel bought shares of Reliance from the market at higher price levels and it was also learnt that Dhirubhai Ambani himself supplied those shares to the Bear Cartel and earned a healthy profit out of The Bear Cartel's adventure.After this incident, many questions were raised by his detractors and the press. Not many people were able to understand as to how a yarn trader till a few years ago was able to get in such a huge amount of cash flow during a crisis period. The answer to this was provided by the then finance minister, Pranab Mukherjee in the parliament. He informed the house that a Non-Resident Indian had invested up to Rs. 220 Million in Reliance during 1982-83. These investments were routed through many companies like Crocodile, Lota and Fiasco. These companies were primarily registered in Isle of Man. The interesting factor was that all the promoters or owners of these companies had a common surname Shah. An investigation by the Reserve Bank of India in the incident did not find any unethical or illegal acts or transactions committed by Reliance or its promoters.

Despite his almost Midas Touch, Ambani has been known to have flexible values and an unethical streak running through him. His biographer himself has cited some instances of his unethical behavior when he was just an ordinary employee at a petrol pump in Dubai. He has been accused of having manipulated government policies to suit his own needs, and has been known to be a king-maker in government elections . Although most media sources tend to speak out about business-politics nexus, the Ambani house has always enjoyed more protection and shelter from the media storms that sweep across the country.

Nusli Wadia of Bombay Dyeing was, at one point in time, the biggest competitor of Dhirubhai and Reliance Industries. Both Nusli Wadia and Dhirubhai were known for their influence in the political circles and their ability to get the most difficult licenses approved during the times of pre-liberalized economy.During the Janata Party rule between 1977 - 1979, Nusli Wadia obtained the permission to build a 60,000 tonnes per annum Di-methyl terephthalate (DMT) plant. Before the letter of intent was converted into a licence, many hurdles came in the way. Finally, in 1981, Nusli Wadia was granted the license for the plant. This incident acted as a catalyst between the two parties and the competition took an ugly turn.

Ramnath Goenka, the patriarch of The Indian Express Group. This file photograph of Mr. Goenka was taken in his penthouse at the Express Towers, Nariman Point, Bombay

Ramnath Goenka, the patriarch of The Indian Express Group. This file photograph of Mr. Goenka was taken in his penthouse at the Express Towers, Nariman Point, Bombay

As days passed by, The Indian Express, a broadsheet daily published by him, carried a series of articles against Reliance Industries and Dhirubhai in which they claimed that Dhirubhai was using unfair trade practices to maximise the profits. Ramnath Goenka did not use his staff at the Indian Express to investigate the case but assigned his close confidante, advisor and chartered accountant S. Gurumurthy for this task. Apart from S. Gurumurthy, another journalist Maneck Davar who was not on the rolls of Indian Express started contributing stories. Jamnadas Moorjani, a businessman opposed to the Ambanis was also a part of this campaign.Both Ambani and Goenka were equally criticized and admired by sections of the society. People criticized Goenka that he was using a national newspaper for the cause of a personal enmity. Critics believed that there were many other businessman in the country who were using more unfair and unethical practices but Goenka chose to target only Ambani and not the others. Critics also admired Goenka for his ability to run these articles without any help from his regular staff. Dhirubhai Ambani was also getting more recognition and admiration, in the meantime. A section of the public started to appreciate Dhirubhai's business sense and his ability to tame the system according to his wishes.

The end to this tussle came only after Dhirubhai Ambani suffered a stroke. While Dhirubhai Ambani was recovering in San Diego, his sons Mukesh Ambani and Anil Ambani managed the affairs. The Indian Express had turned the guns against Reliance and was directly blaming the government for not doing enough to penalize Reliance Industries. The battle between Wadia - Goenka and the Ambanis took a new direction and became a national crisis. Gurumurthy and another journalist, Mulgaokar consorted with President Giani Zail Singh and ghost-wrote a hostile letter to the Prime Minister on his behalf. The Indian Express published a draft of the President’s letter as a scoop, not realizing that Zail Singh had made changes to the letter before sending it to Rajiv Gandhi. Ambani had won the battle at this point. Now, while the tussle exit. The government then raided the Express guest house in Delhi’s Sunder Nagar and found the original draft with corrections in Mulgaokar’s handwriting. By 1988-89, Rajiv’s government retaliated with a series of prosecutions against the Indian Express. Even then, Goenka retained his iconic stature because, to many people, he seemed to be replaying his heroic defiance during the Emergency regime.

It was widely known that Dhirubhai didn't enjoy a cordial relation with Vishwanath Pratap Singh, who succeeded Rajiv Gandhi as the Prime Minister of India. In May 1985, he suddenly removed the import of Purified Terephthalic Acid from the Open General License category. As a raw material this was very important to manufacture polyester filament yarn. This made it very difficult for Reliance to carry on operations. Reliance was able to secure, from various financial institutions, letters of credit that would allow it to import almost one full year’s requirement of PTA on the eve of the issuance of the government notification, changing the category under which PTA could be imported. In 1990, the government-owned financial institutions like the Life Insurance Corporation of India and the General Insurance Corporation stonewalled attempts by the Reliance group to acquire managerial control over Larsen & Toubro. Sensing defeat, the Ambanis resigned from the board of the company. Dhirubhai, who had become L&T's chairman in April 1989, had to quit his post and make way for D. N. Ghosh, former chairman of the State Bank of India. 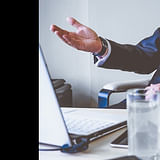