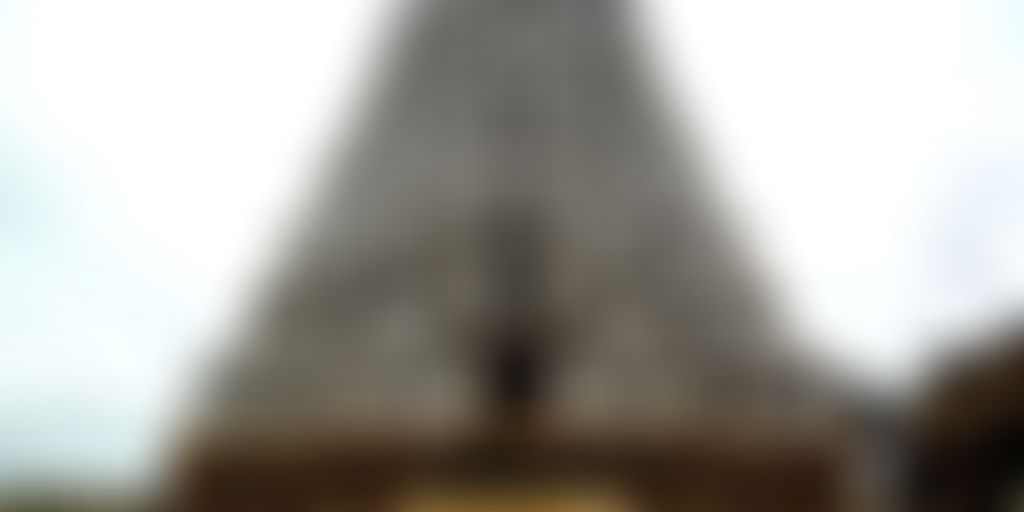 The beautiful sunlight came knocking on our windows to awaken us to yet another beautiful day of our vacation. In the blink of an eye the first four days of our holidays had breezed by. On the 5th day of our travel, after gorging on some South Indian delicacies for breakfast, we embarked on the last leg of our tour to Trichy, situated around 3 hours from Madurai, by road.

We reached Tiruchirappalli, also known as Tiruchi or Trichy around afternoon. Post check-in to our hotel rooms and some good afternoon rest, we left to explore the temples of this city.

Trichy is the fourth largest city of Tamil Nadu and is located on the banks of the river Cauvery.

Sri Ranganathaswamy temple or Thiruvarangam is often listed as the largest functioning Hindu temple in the world. This temple is situated in Srirangam and is dedicated to Ranganatha, a reclining form of the Hindu God Vishnu. 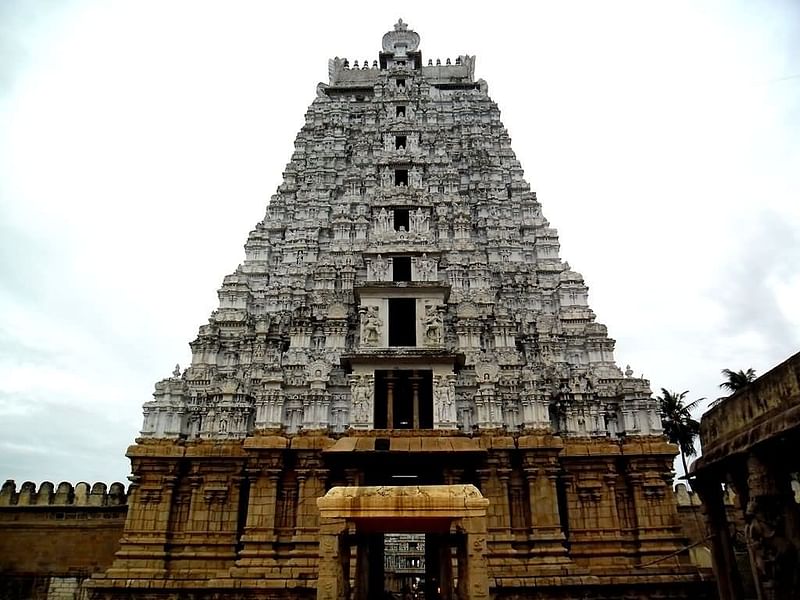 The complex of Sri Ranganathaswamy temple is vast. There are battery-operated cars for tourists to help them commute within the temple’s premises. There are 21 gopurams (tower gateways) across the temple among which the Rajagopuram (shrine of the main gateway), which is 236 feet high, is the tallest temple tower in Asia.

The magnificent Hall of 1000 pillars (actually 953) is a fine example of architectural masterpiece. It is made of granite.

There is a separate shrine of Dhanvantari within the temple. Dhanvantari was a great physician of ancient India and is considered to be an avatar of Lord Vishnu.

Ramanuja - a Vaishnava saint and a philosopher was closely associated with the temple. He attained divinity in Srirangam. Post eight centuries too, his mortal body is preserved and offered prayers in the temple. Saffron and camphor is applied in a ritualistic manner once in every six months to his mortal body. He is seated in Padmasana (yogic sitting posture), depicting the gyana mudra (symbol of knowledge) with his right palm.

Reminiscing our enthralling experience of this majestic temple, we returned to our hotel to relax, rejuvenate and spend some gratifying time with family.

This was the last day of our tour and we had planned to visit the famous Thillai Nataraja Temple at Chidambaram, located 168 kilometres from Trichy. It would take us approximately three and half hours to reach there by road. The temple closes at 12pm for a few hours. In order to be back in time, to catch our trains/flights, we woke up really early and left for our destination.

The Thillai Nataraja temple is an age-old renowned temple dedicated to Lord Shiva and Lord Govindaraja Perumal, one of the few temples that are house to deities of both Shiva and Vishnu. 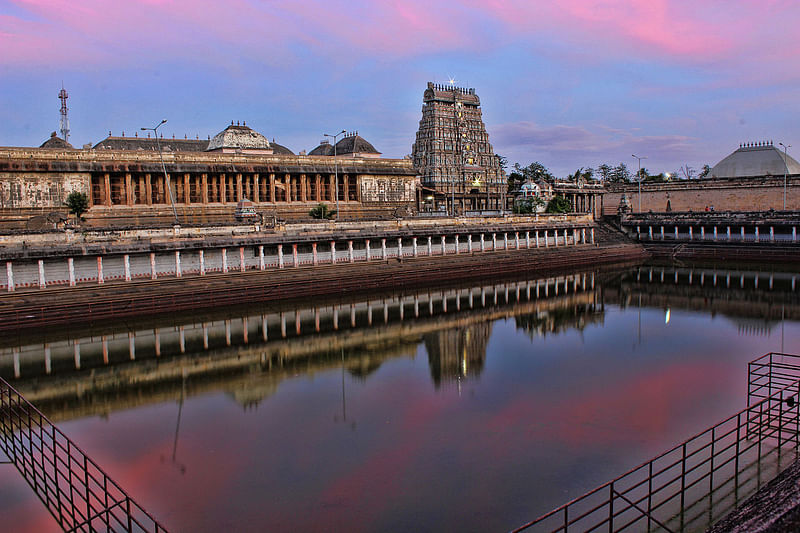 A unique feature of this temple is the beautiful image of Nataraja – Lord of dance. Here, Lord Shiva is represented by a humanoid deity rather than the classic Lingam. This temple hosts the famous annual Natyanjali dance festival on Maha Shivratri.

Thillai Nataraja temple is of utmost significance as per the epic Kanda Puranam, which states that, the Chidambaram shrine is sacred as it is one of the three foremost Shiva abodes in the world, apart from Mount Kailash and Koneswaram Temple.

Pancha Bhoota Stalam (Pancha- five; Bhoota-elements; Stala- place) refers to the five temples of Shiva that manifest the five elements of nature – land, water, air, sky and fire. In South India, five temples were built for each of the five elements. It is believed that these elements are enshrined in the five lingams of these temples. Chidambaram temple represents the element ‘akasha’ (Sky).

Located around 110 kilometres away from Chidambaram is Thanjavur, which is home to the magnificent Brihadeeswarar Temple, a part of the UNESCO World Heritage site and are known as the “Great Living Chola Temples”. This temple is also known as Raja Rajeswara Temple or Peruvudaiyar Temple.

The presiding deity at the Brihadeeswarar Temple, locally known as ‘Big Temple’ is Lord Shiva. The lingam is 3.7m tall. The temple is 1000 years old and this monumental masterpiece boasts of Dravidian architecture. The temple tower, i.e., the ‘Vimanam’ is 198 feet (60m) high and is one of the tallest structures in the world. The statue of Nandi (the sacred bull) is a monolithic one and is the second largest in India. It is 13 feet high and 16 feet long. The Nandi statue at Lepakshi temple is the largest one. 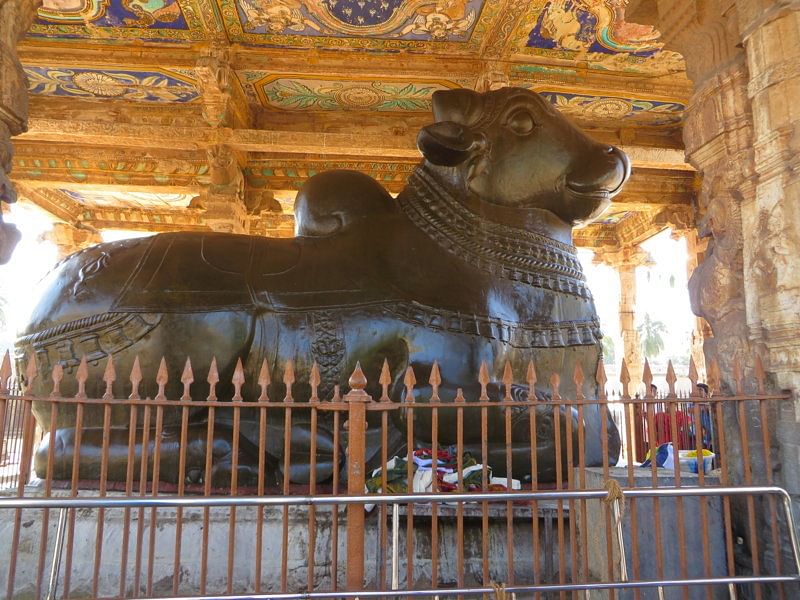 This temple marked the end of our enriching tour of the temples of South India. With beautiful memories in our mind and an enthralling experience in our hearts, we headed back home.