I recall - As dusk falls on the eve of India’s Independence Day 2015, there is a sense of calm in our hearts for the first time in 13 years. We are gazing onto our new patch of garden in Bhubaneswar, having come home and we do not have to go over each minute detail in preparation of a Flag- Hoisting at India House! In fact, it had always been busy, busy, busy… on the eve of Independence Day, for over three decades. My recently-retired husband would spend hours checking the morning rituals, including the repast for all the Indian citizens overseas (no trust in me?!) – this was tricky as an Open Invitation is placed in the newspapers, so we could expect from a 100 to 400 persons or in the thousands in some countries! Caterers were always asked to be on standby for refills! From checking that the sound systems were tuned, with a lot of help from our son, to choosing the patriotic songs to be played and checking the metal detectors that sadly entered our lives overseas, even tying the cloth-bunting colours of our Flag on the tents, no detail was too small to attend to.

Yes, I have been told by many he was an unusual High Commissioner/ Ambassador — one “...always fond of working tirelessly , both at the mission and the gardens of the residence!" Then he would ponder over his words for the speech to follow the President’s speech. Finally, that final ‘just checking’ that the rose petals fell gently to the ground as the Flag was unfurled…supervising and standing with the workers, even long after they had left, sometimes till midnight. What thoughts coursed through his mind? Each day in 'govt. service'- as it is fondly called in India, dedicated to his home-land and its citizens overseas, the PIOs People of Indian Origin and local dignitaries and diplomats...quite daunting, I would imagine. 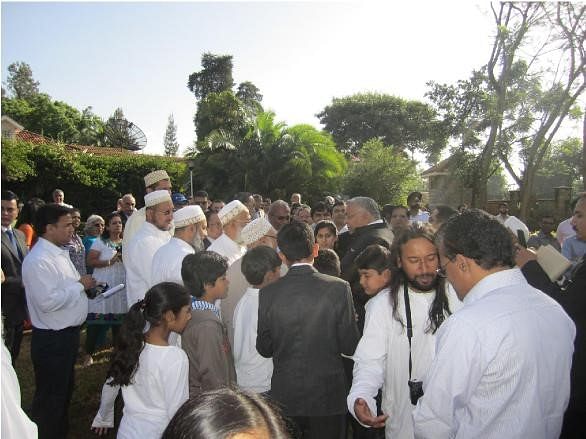 I never intruded into those precious moments of reflection and stillness. From Madagascar with Comoros, to Uganda with Rwanda and Burundi, to Kenya with Somalia and Eritrea and earlier, from Korea to Finland and then to the isthmus of Panama and Sri Lanka — our moments with the Indian diaspora, have been etched into our hearts. I still recollect with fondness my very first Independence Day celebration overseas. 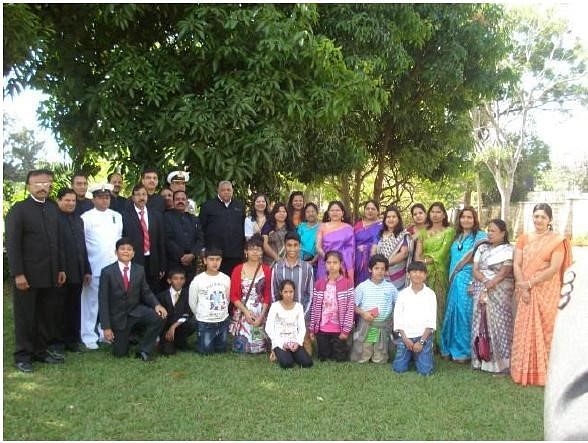 Our High Commission family in Nairobi

We were called to prepare two thousand gulab jamuns and samosas, as there were no proper Indian caterers at the time. It was hard work, but we had a wonderful time — singing, cribbing but generally bonding in the large kitchen! Luckily, we managed between all the spouses and the India House chefs. Till today, the sight of a delicious gulab jamun or samosa makes me cringe a little bit! At last year's Independence Day (*2014 ), sitting on the ramparts of Red Fort as the new PM Shri Modi spoke of his vision for India, once again that pride in our country filled me with hope, despite its burden of over a billion people, illiteracy and poverty, for we never give up. Incredible India has miles and miles to go, but we do keep moving.