A Crazy Idea of an Android App: FreeRide 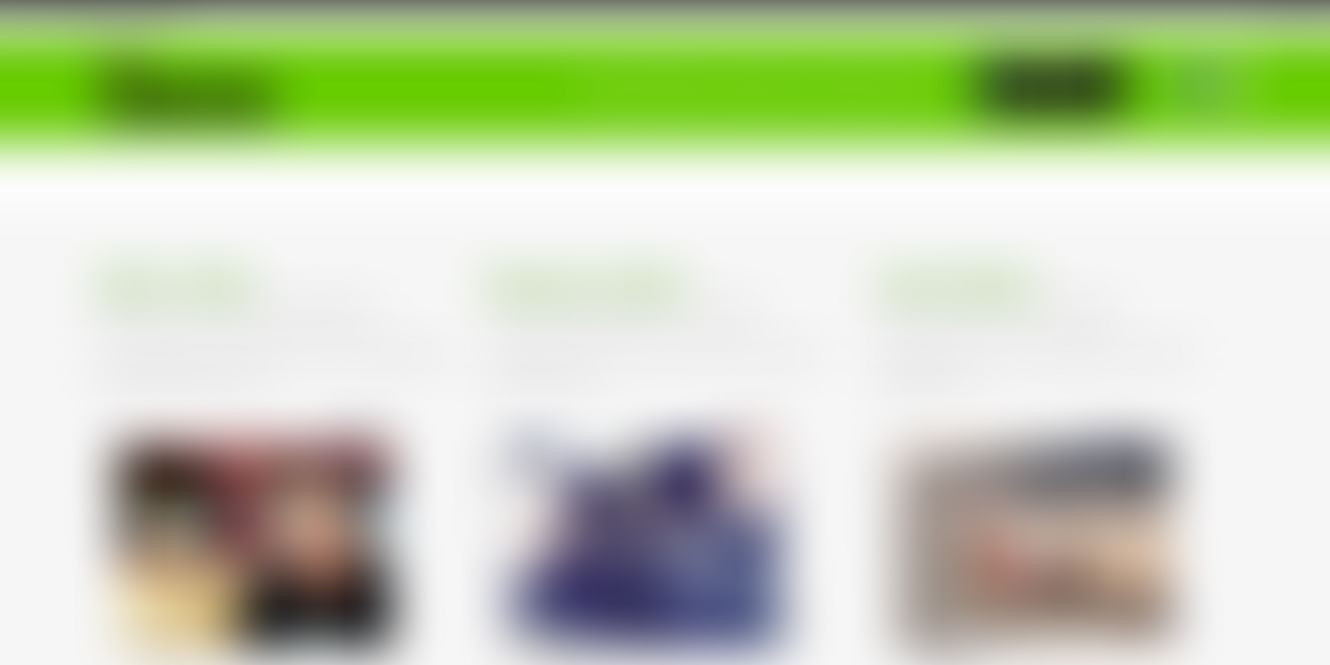 Free platform for People who want to Offer rides and Find rides, both for FREE. The Idea is to maximize the utility of the existing vehicles plying on road and to develop a system which is self sustainable to help improve environmental conditions.

I have been inclined to nature and its beauty & vastness right from my childhood, the subject of environment and its conservation were and still are close to my heart. Always wanted to do something for the environment and its conservation but being a middle class boy with very few resources could not worked on my true aspirations. Ended up in a job after engineering, though it could be enciting for many to have a degree of engineering from one of the reputed National Institute of Technology and a permanent job with Indian Oil Corporation limited (India's largest PSU) but my inaction for environment conversation is suffocating me.

The Feeling of Necessity

Then comes the great wave of Android apps which can help you in doing anything you can think of. I was feeling constantly the changes increased traffic has made to our lives. I lived in Vadodara and felt that from 2007 to 2015 the exponential growth of the vehicles had suffocated the city and there were chaos for parking space. With people being more interested in owning their own vehicles and easy vehicle loans added with long commuting distances the number of vehicles keep on increasing. This increase can be termed as development as per various perspectives but to me it is a great way to choke our environment and another way to further the harm to the community.

Then there came a scheme of Odd-Even to fight the alarming pollution in the capital of our country. I am not sure how successful was it but it gave me an idea to develop an App which can help the people to utilize the existing vehicles in more efficient way. I discussed the idea with my wife, my friends Arvinder and Hina and concluded that the idea can work. On searching the internet I observed there are already such apps/websites available in the market like blablacar etc. so I had to work out some strategy by which I can develop an app which can be equally if not more effective than the existing ones.

I have read somewhere that Indian people feel very attractive to freebies even if that is less profitable comparing to some other paid schemes. So i thought "lets make it free" and pitched the idea again to my wife and friends but they felt that to sustain an app we need funds so it should not be done. But I had made up my mind and approached a website and app developer company in the city, I discussed my idea to them. They said they need to discuss it with their management and will let me know about their views after a feasibility study.

I was eagerly waiting for their response and after few days not to my surprise they suggested me to drop the Idea because in market already apps are there who pays the user to share his/her ride. But I had already decided that I will launch the app whatever be the consequences, I discussed with them that let us start working on the App and we will figure out the ways to generate revenues to sustain. Finally they agreed as they don't have anything to loose from my Idea and I was willing to take the risk. We sit together and jot down the features I wanted in the App. After this they presented me the number that was going to be the cost of getting the app and website with the features I wanted in it. That number was quite large for me, more than the double of my small bank balance. But I thought its Ok, the risk is worth taking and that was something I really wanted to do from deep within. Something about which I was very exited after a long time. So I give them a green signal to go ahead with the app development.

After some 3 months the App was ready, it took lots of new feature additions (additional cost) many technical/testing issues before the App turned out as per my expectations. I had somehow managed to pay the bills using my credit card thanks to its long payment cycle. Generous help from my friend Arvinder Singh was a blessing for the App. The app was tested with various mobile devices on various android versions and it worked really fine. We have put a lot of safety features, mobile verification, vehicle verification, etc. to made the app compatible to our users specially for women users. The website also turned out to be good. I felt satisfied with the outcome. 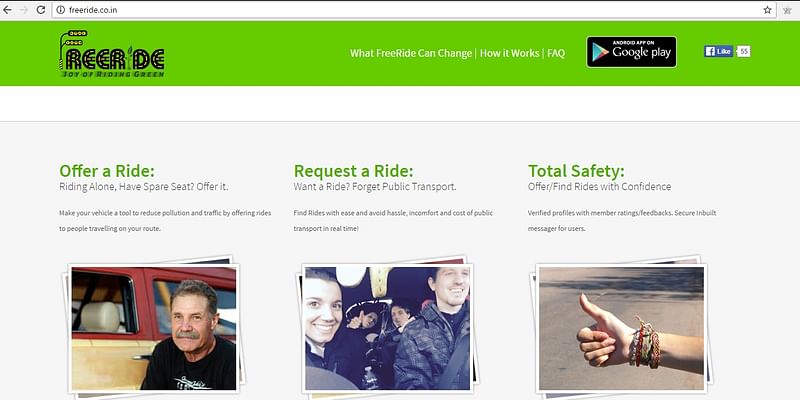 I knew that however good my App may be, but it will not work unless it gets publicity. So I used my network of Facebook, Twitter etc. which is a bit smaller, approached various politicians,celebrities,sport persons, etc, waited for getting an appointment to meet them and ask for their support. Even asked my big bosses who could have influenced lot of people but all in vain. Approached a leading newspaper Rajasthan Patrika and convinced them to publish my story, but even after publishing that story nothing changed. Tried to meet Rajasthan CM but the person who looks after her technical/social media content kept saying she is busy and I never got a chance to meet her. I have tried to contact various NGOs who worked in the field of environment conservation including Greenpeace but didn't get any response. It was so frustrating that even after putting money from my own pocket with no intention of earning no one is helping me in propagating the idea which is ultimately going to help all the people in general. As of now only around 169 members created their profile on the app after around 10 months of launch and not sure if anybody have ever used it. But i am also hell bent to do whatever it takes to popularize the app. Writing here about my App is also a part of that effort. 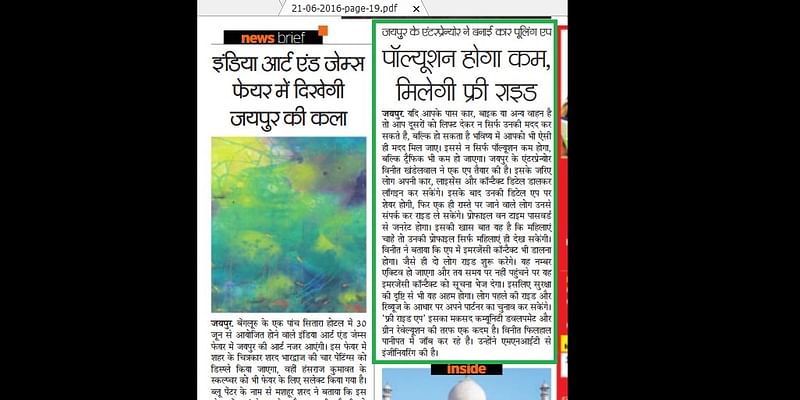 Since the time this idea of Freeride came in my mind and whoever with I shared the idea called me CRAZY. Everybody used to ask me "who is going to give free ride to anyone if he can give it for money?" "who is going to give free ride in our unsafe country?" "How the person who give free ride will be benefited?"etc. and straight away declared me crazy for coming up with this idea including my family members, friends and relatives. I have posted answers to all such questions in FAQs at our website but, still its not convincing to them.

I have firm faith in my belief which help me to come so far with this App and I believe that there are so many people sharing the same feeling about the environment and the urgent need to act for its conservation. I am sure that my App will definitely achieve the purpose for which it was created. And this App will be a game changer in our fight against air pollution, noise pollution, road accidents, poor work life balance. And I have full faith that there are more crazy people like me around us who can do whatever it takes to protect our environment. I have recently resigned from my "permanent" job and willing to work for the greater cause. 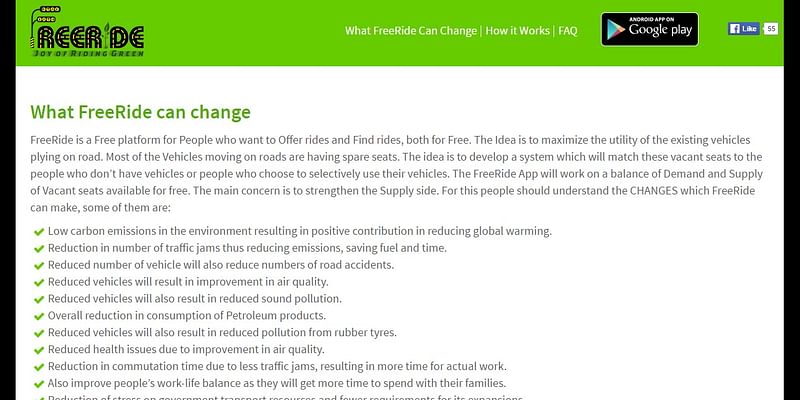 Hopefully you people would understand the immediate attention needs by our environment and how my App can help !

Ways to Support Us