It is not all over for Indian IT firms yet 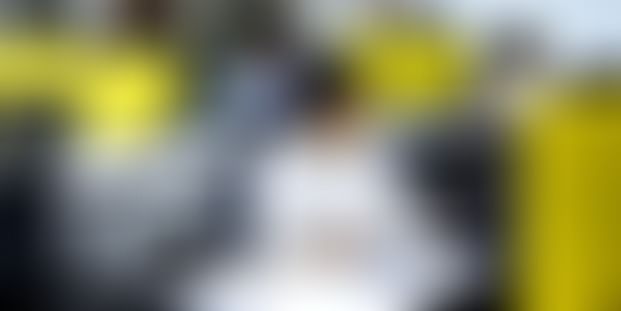 The first of two-part series that delves deep into the biggest concerns of the Indian IT industry including large buybacks, a lackluster M&A table and layoffs.

The Indian IT industry that has so far witnessed a growth that few industries in the country can match, is now staring at a shift that could threaten to blow the wind out of its sails. Emerging digital technologies such as augmented reality, artificial intelligence, genomics, etc. are creating entirely new markets and are inherently changing the way we live. 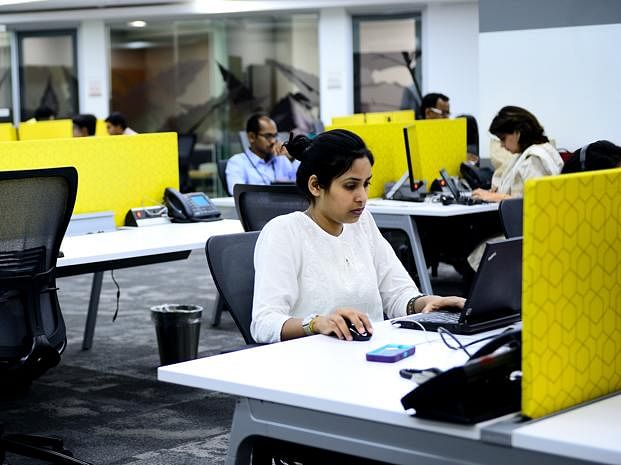 Indian IT firms who had hitherto grown on a healthy diet of development and maintenance work mainly from offshore customers must now relook at their strategy for this new challenge. Industry body NASSCOM estimates reveal that Indian IT firms exported software and services worth $108 billion in FY16. 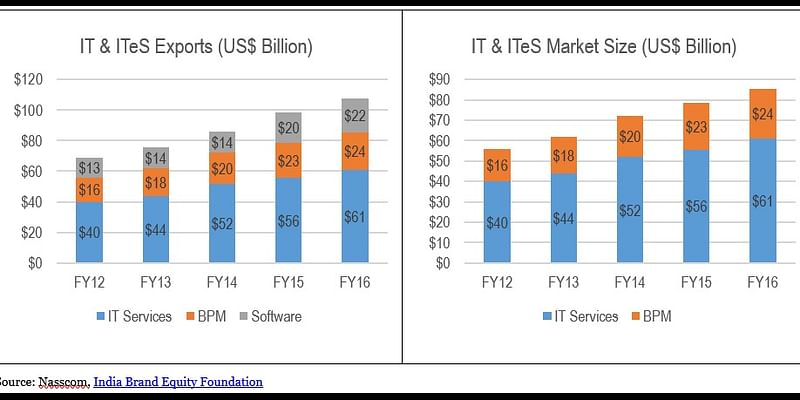 NASSCOM had already revised its industry growth guidance to 8-10% for the fiscal year 2017-18 from the earlier projected rates of 10-12% and even deferred its outlook for the next fiscal year to May 2017 in an unprecedented move.

Digital is becoming more pivotal than ever

Today, customers are looking for solutions that are truly end-to-end on the digital scale. In other words, Indian IT firms are expected to get out of the traditional mold of developing or maintaining applications.

They are expected to suggest solutions to the customer that transform the way IT is delivered and consumed. For example, using artificial intelligence to improve the customer experience for a bank similar to what Washington-based K2 Bank did using chatbots or using genomics to accelerate the push towards personalized medicine and faster drug discovery leading to reduced costs.

A July 2015 news article by livemint had reported the glaring variance in digital revenue per employee for Accenture and TCS. Recent estimates now show the difference even more starkly as evident in the below chart. Accenture’s had 40,000 employees in its digital practice and generated revenue per employee of $337,500. Cognizant's annual report says 26% of its revenues ($13.5 billion) was from digital activities, netting it a higher digital revenue/employee than its Indian rivals. TCS employed 60,000 employees in its digital portfolio accounting for $48,920 per employee. Many analysts have predicted that this difference is unlikely to converge over the coming years. 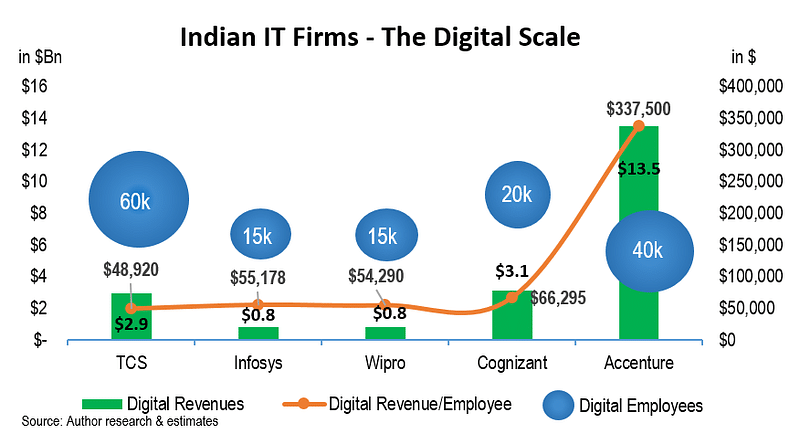 So, does it sound the death knell for India’s $124 billion IT industry that employs 10 million people and controls about 67% of the global IT outsourcing industry? Well, we have reasons to believe it is not so.

In February 2017, Capgemini India CEO Srinivas Kandula had stated that 60-65% of the country’s IT workforce based in India were untrainable – a strong statement coming from the CEO of an enterprise which is deeply entrenched in the Indian IT landscape, that also employs about 100,000 people and derives ~30% of its revenues from newer digital technologies.

Kandula’s concerns are not unfounded. He had said that many of these employees had graduated from below-par engineering colleges that did not have adequate grading mechanisms in their eagerness to maintain neat records.

Many of the fresher employees had been unable to answer questions from subjects taught in the final semester of their college terms. Moreover, many IT firms had been overzealous to reward their investors than investing in upgrading the skill-sets of their employees.

What is even more disconcerting is that his comments came soon after McKinsey put out a report saying that nearly half of the workforce will be “irrelevant” in the next 3-4 years. McKinsey says the real challenge lies in retraining about 50-60% of these employees.

Capgemini, for its part, later assuaged their CEO’s concerns saying that it plans to retrain all of its Indian employees, but the efficacy of such a large program is yet to be established.

What ails the Indian IT firms?

Analysts believe that Indian IT firms appear to have lost the plot as their bigger competitors have now stolen a march over them. The biggest concerns in the short term appear to be a combination of large amounts being committed as share buybacks, Brexit, the Trump administration’s crackdown on H-1B visa and automation. Add to this is a sputtering global economy that appears to be waiting on the sidelines.

The company had appeared to be finally witnessing a turnaround in fortunes until 2016-17 under CEO Vishal Sikka after years of a succession dilemma, that saw an exodus of top-level executives.

Recent public spats between ex-founder Narayana Murthy and the Infosys board over executive pay have not done favors to their image either. The company has had to relent to shareholder pressures as it considers a share buyback of $2.4 billion in an attempt to break free of the stakeholder shackles.

The euphoria over Sikka’s April 2015 announcement of an ambitious $20 billion revenue base at 30% margins appear to have evaporated sooner than they appeared on the horizon.

Cognizant had announced a similar $3.4 billion buyback plan earlier in February under pressure from activist investor Elliott Management Corp. “When you see the best performers being awarded only 95% of targets, it means a large chunk of its cash will be diverted towards gratifying its shareholders,” says a stock market analyst who tracks Indian IT firms.

If we look at some of their US-based competitors such as Accenture and IBM – Accenture has bought 10 companies in 2017 alone (and six boutique creative firms in the second half of 2016), while IBM had gobbled three in a single week in early 2016 and another in April 2016. In comparison, Indian IT firms have always shied away from big-ticket acquisitions.

"Large share buybacks will sorely hurt the long-term growth prospects of the Indian IT firms as they will not be able to fund mid to large acquisitions or invest in talent when the opportunity presents itself. How Infosys is going to hit the $20 billion mark by 2020 by way of organic or inorganic means is anybody’s guess," adds a senior analyst at an Indian research company.

Among the Indian IT vendors, only Wipro has acquired 5 companies for a total of $1.2 billion during 2015-17, while HCL and Tech Mahindra have been quietly beefing up their positions with 10 acquisitions worth $1.1 billion. Cognizant too has acquired 10 companies during this period. The only big-ticket acquisition for Infosys was its Panaya deal worth $200 million. TCS has not notched any acquisitions in the last two years. 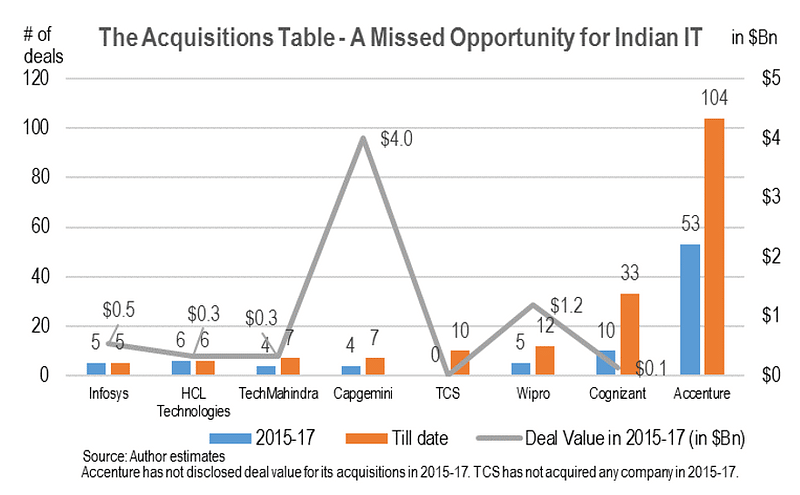 Share buybacks merely bring short-term cheer and boost investor confidence, but investing in employees, technology capabilities and acquisitions pave the way for long-term growth. It is about time Indian IT firms realize this.

3. Knocking people off the rolls hardly solves the issue

The other gripe that quite a few IT vendors have resorted to is removing people off their rolls. Cognizant, employed 2,60,000 people on its payrolls, had plans to lay off 2-3% (~6,000) of its workforce after having removed 1-2% of its employees in the previous years.

The company reasoned a lot of these employees were to be let go due to a combination of “under performance and skill mismatch” and the emergence of newer digital technologies including automation.

Shortly after, Wipro was in the spotlight for removing 600 people. If you compare the two companies, Cognizant is under more serious pressure due to its activist investor groups who own about 91% of the company’s stock. Wipro’s 70% stock is owned by organizations and trusts owned Azim Premji, and so need not bow to investor pressure according to him. On the other hand, hiring too has slowed down with Indian IT firms hiring ~14,400 people in September 2016, 43% less than a year ago. Chances are this may even result in lower employee morale and voluntary attritions may impact its long-term growth.

"Aren’t these employees not worthy of their places in the organization? Can’t they be trained on alternative skills so they can be redeployed in other areas? Surely that cannot be the case, " says an industry expert.

What lies ahead for Indian IT firms?

In the next part, let us look at other factors such as increased automation, Brexit, H-1B visa revisions, and shrinking operating margins that the industry is coming to terms with. Keep sending in your thoughts on what you think is affecting the Indian IT industry.