Speed ​​Up With Inline Skates

Inline skating has two basic elements: acceleration and braking. Both are equally important and must of course be learned and practiced. To brake with skates, there are several techniques to choose from.

Inline skating has two basic elements: Acceleration and Braking. Both are equally important and must of course be learned and practiced. To brake with skates, there are several techniques to choose from. For example, braking with the stopper, the T-brake, the Power Slide, the snow plow brake and the hockey stop or the skater can reduce his speed by turning into a light slalom. While it may take a while for a beginner to really brake safely, skating acceleration usually does not cause major problems. Especially those who have ever been on skates or skates, usually choose automatically the right movements.

Speed Up With Inline Skates

The driving technique for inline skating is based on the so-called skating step. This means, similar to skating, the feet are also slightly inclined to the direction of travel when skating. The skater then first presses off with one foot, shifts his body weight to the other foot, then pushes off with that foot, shifting his body weight again and again and so on. Through this zigzag step, which is exercised with force, the skater takes up speed. If he has gained enough momentum, he can switch to light sliding movements or place his feet next to each other and roll.

Speed ​​Up With Skates & Drive Fast

Of course, many recreational and amateur skaters do not just want to glide comfortably through nature, but also want to travel longer distances at a faster pace. It does not have to be real speed-skating, which is really about speed, for example in the context of racing.

But a speedy driving style may like it. To accelerate with skates and drive fast, several techniques and tricks are used. Absolute beginners should, however, basically only deal with a higher speed if they can brake safely.

The more upright the posture while driving, the greater the air resistance. If you want to drive fast, you should try to keep the area for the headwind as small as possible. This is achieved by the skater occupying a forward stoop posture with a flat upper body and deeply bent knees. In addition, the skater should deliberately involve his arms. Similar to a sprint without roller skates, strong arm movements also help to skate the steps and also have a positive effect on the balance while driving.

Big steps require more power and are more exhausting than short steps, but to achieve the same speed at the same time requires many more small steps. The implementation of the skates with increasing speed also increasingly costs strength. The bottom line would be not just more short steps required, but driving would be more exhausting. Therefore, for high speeds should be made as long as possible, long steps. In addition, the feet should be repelled next to each other as close as possible. Although this looks visually a bit as if the skater has X-legs, a wide-legged ride costs unnecessary speed. 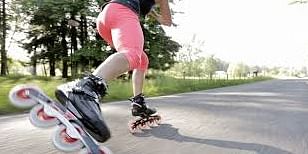 It is also important to use the entire length of the rail when repelling. If the skater bumps with the front or rear wheels, he will take a small turn with each step. Although this curve is minimal, it shortens the pace and reduces speed. In order to practice straight steps and to drive long-term high speeds, skates with long rails and either five or four large wheels are suitable.

After kicking off, the foot which has slipped beforehand is put on. The more force that is in play during this landing, the greater the load on the bearings on the launch and the higher the rolling resistance. This in turn leads to energy and speed losses. The skater should therefore try to make his skates as supple and gentle as possible. Incidentally, he also spares his knee joints.

14 Good Reasons Why You Should Get Out of Debt