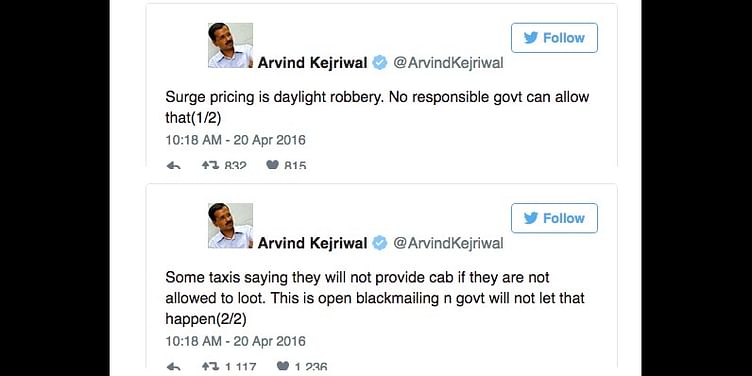 Surge pricing has been in news in India for past few days. Be it Karnataka Government putting an upper slab over surge pricing or Arvind Kejriwal calling it as a "daylight robbery" and even threatening to take action. 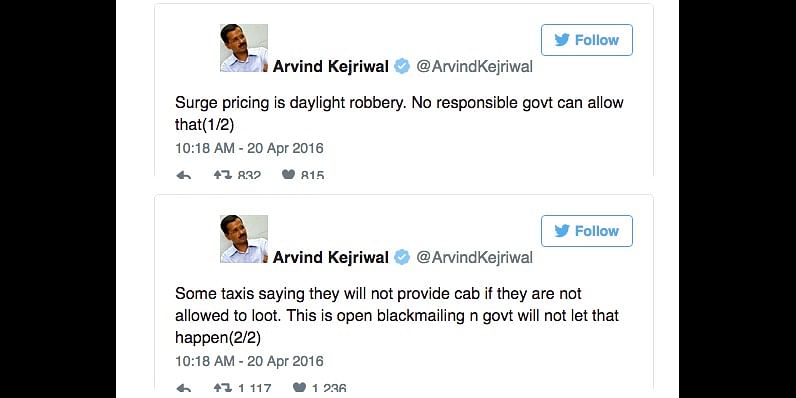 Uber and Ola did respond by temporary suspending the surge during odd-even phase 2 which ended on April 30. Though the Delhi residents welcomed the move but it led to a shortage of cabs. But now since the Odd-Even Phase 2 is over, Uber (Ola will soon follow) has returned back to surge and so is the debate. In fact it was surprising to know that many including highly educated section of our society were objecting it without actually knowing the concept of surge pricing or better known as dynamic pricing and calling it a scam. So before jumping to the decision (which is what most of us do) and targeting Uber and Ola, let us understand the how dynamic pricing really works and then debate or comment.

How does Dynamic Pricing really work?

Dynamic pricing is the practice of pricing items at a level determined by a particular customer's perceived ability to pay. Also known as real-time pricing, it is an approach to setting the cost for a product or service that is highly flexible. The goal of dynamic pricing is to allow a company that sells goods or services over the Internet to adjust prices on the fly in response to market demands.

Changes are controlled by pricing bots, which are software agents that gather data and use algorithms to adjust pricing according to business rules. Typically, the business rules take into account such things as the customer's location, the time of day, the day of the week, the level of demand and competitors' pricing. With the advent of big data and big data analytics, however, business rules for price adjustments can be made more granular. By collecting and analyzing data about a particular customer, a vendor can more accurately predict what price the customer is willing to pay and adjust prices accordingly.

Dynamic pricing is easier to understand from economics point of view. Pick a copy of any introductory economics textbook, in either the first or second chapter you will find a description of the supply-demand curve. The demand shortage is needs to be equalised by the supply which naturally means a rise in price. This principal is the DNA of dynamic pricing and can be easily explained by demand-supply curve. 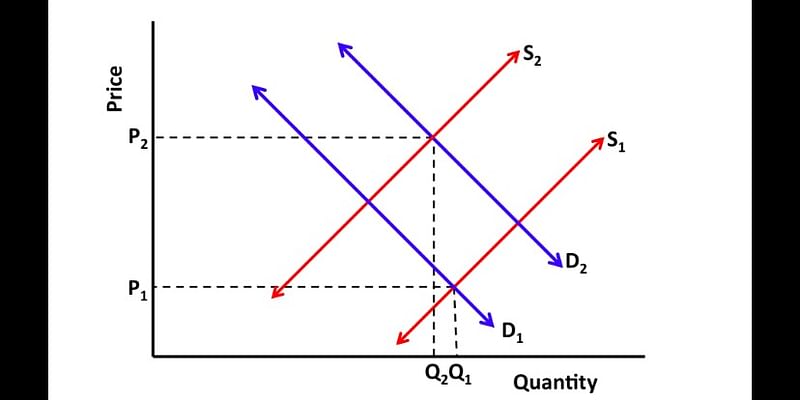 Uber and Ola are not the first ones who have used dynamic pricing model to counter excessive demand. In fact dynamic pricing is a common practice in several industries such as hospitality, travel, entertainment, and retail. Each industry takes a slightly different approach to repricing based on its needs and the demand for the product.

Hospitality: Hotels and other players in the hospitality industry use dynamic pricing to adjust the cost of rooms and packages based on the supply and demand needs at a particular moment. For a hotelier, the demand for a room on New Year’s Eve is dramatically higher than a random weekday two weeks later. With no ability to increase supply, they are left with the alternative of selling to the highest payer. This is a relatively well-understood and accepted practice.

Airlines: Airlines change prices often depending on the day of the week, time of day, and number of days before the flight. For airlines, dynamic pricing factors in different components such as: how many seats a flight has, departure time, and average cancellations on similar flights. Haven't we witnessed the surge in fares during Diwali season when a last minute flight can cost as higher as 8X?

Retail: Retailers, and online retailers in particular, adjust the price of their products according to competitors, time, traffic, conversion rates, and sales goals.

There is one key difference that materially increases the need for dynamic pricing in cab aggregators' case. With hotels, airplanes, and rental cars, supply is relatively fixed. One cannot build more rooms for New Years Eve, and then take them down. But companies like Uber and Ola have a different problem. At the exact time that riders want more availability – Friday and Saturday night, in a bad storm, on New Years Eve, during peak hours – drivers would rather not be driving. You see, while hotel rooms are fixed, Uber’s or Ola's supply actually shrinks at these times, because the drivers would prefer not to be working at those times either. The exact events that increase demand for needing a driver also cause supply to shrink. Just imagine, why would a driver drive during peak hours in Bengaluru or Gurgaon if they would be getting same incentive while driving during non-peak hours. In these cases the supply curve is moving left at the exact same time that the demand curve is moving right. As a result the need for a price catalyst to increase supply in the Uber or Ola case is vital.

In fact hike in the fare does act as a catalyst and genuinely motivate the drivers to go on the road, if they are off the road for any reason or not near a locality that needs cabs. Uber and Ola are a true marketplace models, they don't own cars and they don't own drivers. So surge pricing does have the effect of increasing the supply of cabs in an area either bringing down waiting times, by making more cabs available on the road. On the other hand dynamic pricing in hotels does not make more rooms available or in the case of airlines it does not make more airline planes or seats available.

Unfortunately companies like Uber and Ola have made this a black box model by saying they use a surge pricing algorithm. And algorithms are mysterious things that you can't see immediately raising your suspicion. At the same time they cannot reveal their algorithms as algorithms forms the core for any technology company. Let us delve a little deeper and try to understand this black box.

1) Companies like Uber and Ola are a marketplace and their drivers are all independent agents. They are independent agents that are either self-employed, or work for someone who owns multiple cars. Each day, and each hour for that matter, these drivers decide whether or not to open the Uber/Ola application and accept requests for rides from the customers. These drivers are not bound by exclusivity. Many of them work on multiple services (Uber and Ola), and many have “regular customers” that they engage off the Uber platform.

2) The majority of the fares go to these independent drivers. On an average, over 80% of gross fares end up in the hands of drivers. What’s more, of the percentage that is retained by Uber or Ola, a large portion goes to cover variable expenses within the service. This has been verified by the drivers themselves by sharing their invoices. Look at the account of a senior executive at Times Internet Limited who himself became an Uber driver just to prove this point. 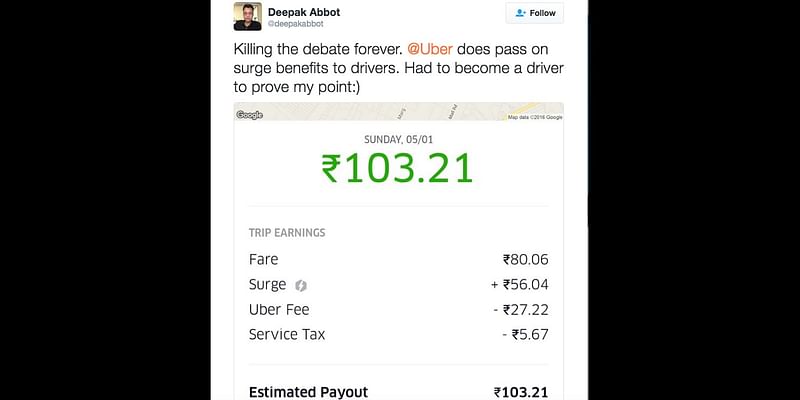 3) Companies like Uber and Ola notifies the customer about the surge pricing before booking the cab on their platform. They do not cheat the customers by charging them without knowledge. This helps them to serve to a customer who needs it urgently (say has a flight at 4 am) and willing to pay more; rather than catering to a customer who does not need it urgently (say to go to a mall) and can wait for the drop in the surge or for other alternatives.

I have not included the equivalent charge for the ease we get while booking Uber or Ola and amount of payment options we get in comparison to the hassles we face while booking a normal taxi.

Targeting Uber and Ola might offer a populist resort propagated by politicians and supported by people like us sharing the sentiments, but it saddens me more when highly educated people start. It seems difficult to understand whether we are objecting to just Uber and Ola or are we against the concept of dynamic pricing in general? Because if we are, then I believe that it would be unfair for us to stop at the cab aggregators and not to attack other industries like airlines and hotels. After all if we are vehement about the principle then we must realise that the same applies equally to other industries as well.

After all one could take the stand that the consumers resent paying more for their rooms during Diwali and and New Year when room rents are known to rise to even 10x (Yes, Goa during New Year). Or that airlines fares are often becoming so unaffordable that people are changing flight times, to accommodate for better prices. Leave these industries, dynamic pricing exists in our lives through products as simple as vegetables and pulses. Haven't we witnessed the rise in the price of onions 2 years back when the production was low in that particular year. When we understand and accept dynamic pricing in all these products/industries; no one appears even the least bit emotional about it then why to raise such hue and cry when companies like Uber and Ola retort to such practices.

Dynamic pricing is increasingly going to be the way the world operates. The majority of leading Internet marketplace companies use dynamic pricing as a solution when confronted with a scarcity of supply. This was the fundamental premise behind Ebay’s original auction model. It is also exactly how things work at Airbnb. It is also the key pricing algorithm behind Google’s core Adwords offering.

So think before calling surge as a loot and jumping to the debate next time.

This article was first published at LinkedIn. You can follow me here for such interesting articles.

Disclaimer: I have no connection to neither companies like Uber and Ola nor political parties like BJP and Congress. I am just a student pursuing MBA from MDI Gurgaon and like to possess a rational point of view.