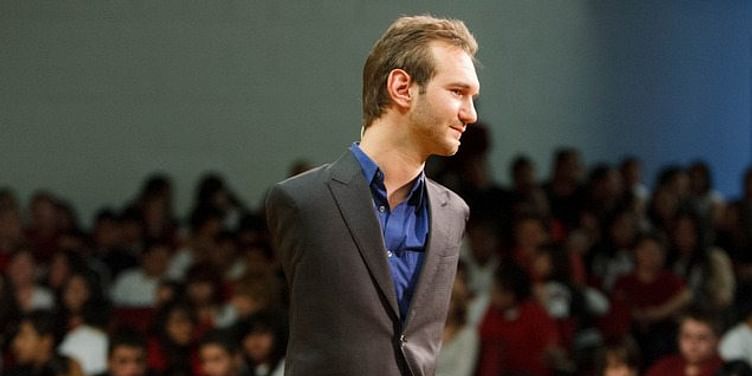 Born with physical disabilities. But Nick never let them affect him. He worked hard and became fully capable. Even without limbs.

IT took me three drowsy days to finally write this article. Actually, I have figured out the title very first day, but procrastination washed me away.

When I peeked closely, I found that some silly ‘excuses’ are dancing notoriously and were the root of procrastination.

“I can’t do it now, I haven’t done enough research.” I thought.

It was after 3 long days (phew) that I wrote this article. This happened when I stopped looking out for any motivation for writing down (or a way to zip the chatter of excuses).

I just shut up my own thinking mind, thrown every excuse to the garbage and sat down to write. Obviously, even after this, I have got some urging excuses to piss this article off and hit some rock music but I didn’t get away with them.

And I didn’t stop until I wrote 1,000 words. Past me was finding the motivation to get started: an excuse to get rid of the hard work. Present me just rolled up every excuse and threw them out of the window and voila! I started my work.

Now don’t think of this as self-boasting, consider it as an example of how deeply rooted our tendency of giving excuses is. Whether small or big, these critically impart a severe blow to our potential growth.

Excuses are our common tool to dodge any hard work, which eventually grows into procrastination. A simple yet powerful way to build a door before any opportunity and a means to put an end to possibilities.

This inspirational story will make you realize that the only thing stopping you from making a big achievement is your attitude.

Nick Vujicic (pronounced ‘vooycheech’) is the founder of two companies, Life without limbs (in which he is presently the CEO) and Attitude is the altitude. He is also the author of four popular books, widely loved and appreciated by people.

Nick has given talks in 57 countries and inspired many with his words. He is the best example of how you can turn down any excuse in your life and achieve the unreachable heights.

He didn’t have an inspirational story just because of his achievement, or the companies he founded, but because of the ‘HOW’ he did all that. There is a bit of very common advice we hear “Work hard without excuse.”, but seldom does anyone tell us how tough it is.

This is where real-life examples come into play, it gives us an eye-opening water splash and makes us question our self-awareness. Nick’s story is the perfect piece of ‘information’ we should consume.

There are many stories on the internet but this inspirational story is rare and different.

“But…what’s so different about Nick Vujicic”?

Can you imagine doing even your simplest of the tasks without limbs?

Nick Vujicic was born, naturally, without limbs and legs with no medical explanation or warning. He was born with tetra-amelia syndrome, a rare disorder (called phocomelia) characterized by the absence of arms and legs. We can’t even imagine the state of his parents. His own mother declined to see or hold him but accepted him afterward as a God’s plan for him.

Nick has two small deformed feet, he jokingly refers to one of them as ‘chicken drumstick’ for its shape. After undergoing surgery to defuse the toes in that foot, he was able to grab, write and even swim!

Growing up, Nick faced a number of challenges at school. In his school days, he was constantly attacked by the bullies. He had admitted that he has suffered from depression and loneliness in his early life. Think about a boy who can’t even hug his parents, such a disheartening fact.

Being so different from others made him question his self-esteem, this became the reason for him to cut off all the conversation with anyone. All this paved a way to leave him alone and broken. We can’t even walk in his shoes.

At the age of ten, he didn’t see any future of him and decided to finally end his life by drowning in the bathtub. After a couple of attempts, he realized he can’t leave his loving family. He didn’t want to leave them with a burden and guilt.

(This video will give you a glimpse of Nick’s capabilities)

THE TURNING POINT FOR NICK:

“Now the goosebumps part, something grand”

‘Turning point’ doesn’t mean something earth-shattering is going to appear in the next line. Let me break your expectation, there is no such great incident happened with Nick that has changed his life. But a small one.

It was at the age of thirteen that Nick hurt his foot which he now uses as typing, swimming, and writing.

This made a huge impact on him, and he became grateful to his abilities and less concerned about disabilities. A mere incident of hurting his foot made him question his wrong believes and build a positive attitude towards self.

Nick gives the credit of inspiration to the janitor who motivated him to go and speak to people. He started to share his story with a dozen peoples. Soon this number got converted to a 100 and now Nick has given nearly 2,000 talks across many countries. His undying faith washed away all the anxiety about his uncertain life and gave new hope for happiness.

Nick Vujicic with his family

Nick has been married since 2012 and has a beautiful wife who constantly supports him. They are blessed with four children and forms a complete family.

Who would have thought that a man without limbs will lead a healthy life?

That happened because of his faith, his gratitude and continuous thrive to grow every day.

This inspirational story about having thankfulness for what we already have is much-needed advice to every one of us finding excuses every time.

The disease of excuse isn’t limited to a group of person but has become a widespread default way to stunt the growth of an individual. Excuses are a normal reaction to our mind because our mind isn’t trained to look at what we already have. This ‘lacking mentality’ is the source of an excuse. We have become master of this ability of always looking for what we lack, the ability which is actually a negative-ability.

A most popular argument can arise, “Hey! You giving all these inspirational talks is okay, but if I don’t focus what I lack how will I move forward?”

Relax. You need to unlearn your concept of growth. It doesn’t happen when you insanely concentrate on what you don’t have, or complain about them or make excuses.

Growing literally means ‘taking on a specific property of attribute gradually’, it means becoming better than you were yesterday.

Tell me if you are thankful today, would you work for happiness or with happiness?

Understand the fine line of difference…

Not by dodging hard work.

Not by doubting yourself.

But by being thankful to what you already have.

Skills Which Can Help You Become an Exemplary Leader