🔹Our new fighter can’t even fly in the rain.

🔹Instead of going to mars, we have invaded the Middle East.

🔹We wanted flying cars, we got 140 characters.

🔷 The Boeing 747 first flew in 1969, yet it still is the main jet carrying people across Pacific oceans.

🔷 Until Motorola & Nokia come up with mobile phone AT & T never do any innovation in its telephone & telegraph design.

Above examples reflect, where we moving in the field of innovation & research. All the innovation in 20th mostly on Atoms & 21st century with Bits. Most of the companies in the world majorly categorized either bits or atoms companies & its part of one of the below 5 business models.

⚫️Bits (0⃣1⃣1⃣0⃣): Company which builds on bits & bytes (0s & 1s) as a fundamental building block. most of the Internet/Software company survive with this principle. Innovation in this area is consistently accelerating in this area. there are too many bits companies right now (WhatsApp, Google, Facebook, Twitter)

⚫️ Atoms (⚛⚛⚛): The smallest unit of matter. & The company which builds purely based on substances aka company having physical visible products. Innovation in this area is consistently slow down in this area. (Ford, Coca-Cola, YKK, Luxottica, GE)

However, the above two sectors are not mutually exclusive. There is a 3rd group where the most successful companies are coming up with products and services that really do combine the best of both worlds i.e. bits and atoms.The most interesting start-ups seem to sit at the intersection of the two — they use bits to manipulate atoms. (Apple, Amazon, Uber) control over both bit (software) & atom (Hardware) market.

The new internet age was all about the overwhelming superiority of customer experience & transforming the atoms to bits across the information superhighway. Below are the few atom contents converts into bit version & become fabulously wealthy.

There are hardly very few companies which transform the bits into atoms(Microprocessor, Biotech, Robotics, 3D-Priniting ) In this model involves the highest Regulatory norms & cost of conversion is high.

Which is more Valuable??

But today’s business reality is very different. The world’s most valuable resource is no longer oil, but data. Assume data/software/computers refers as bits & oil/Energy/land as atoms. while data and oil can both co-create values. 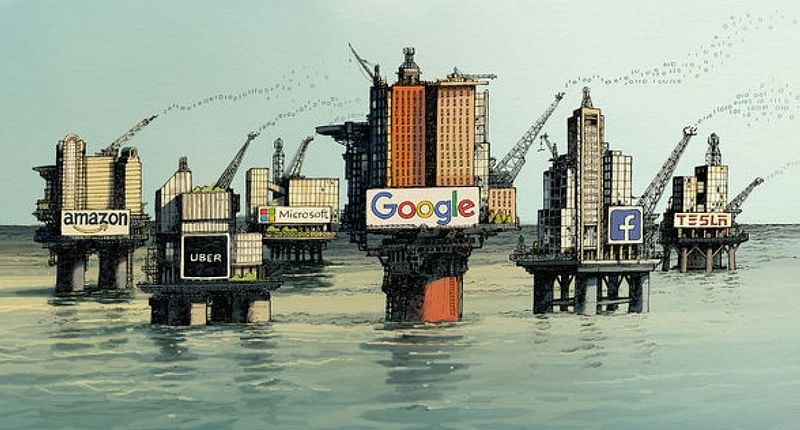 DATA in the 21st Century is like Oil in the 19th Century: an immensely, untapped valuable & intangible asset. Like oil, for those who see data’s fundamental value and learn to extract and use it, there will be huge rewards.

* Generally, a lot of capital is pouring into digital (mobile and social in particular) and not enough into infrastructure (water, energy, transportation) in general atom.

* The analysis & access the value of data, does not affect as much as like access by the physical commodities.Data can be reused, convert, transferred, They move at the speed of light allowing for instant, global access cannot be controlled and monopolize by a small number of owners.

* There will be a wide gap during the revenue of a bit vs atom company. Google, Amazon, Netflix represents the bit monopolize company. with the very huge market cap.

* On the Other side with atom monopolies are fought with regulators for there survival!

* We are referring to the Moore laws to measure the value of the bits & power of compounding used to refer to the value of an atom.

* Additionally, bits ride the virtuous curve of “Moore’s law”. the price of processing power, storage and bandwidth continue to shrink geometrically. While the cost of physical items increases over a short timeframe.

🔹 The cost of business travel in a jet, primary education, continues to grow while the mobile phone gets cheaper& more capable.

🔹 The cost of Coca-Cola, pizza, Rolex watch, Sunglass, medicine & medical treatment is rising but electronic gadgets, computer equipment getting down day by day.

* We lived in a world in which bits were unregulated and atoms were regulated. Its easier to start the software companies than drug or refinery companies. due to the follow up the various FDA norms governing body approvals, taxes, Rules & regulations, laws. 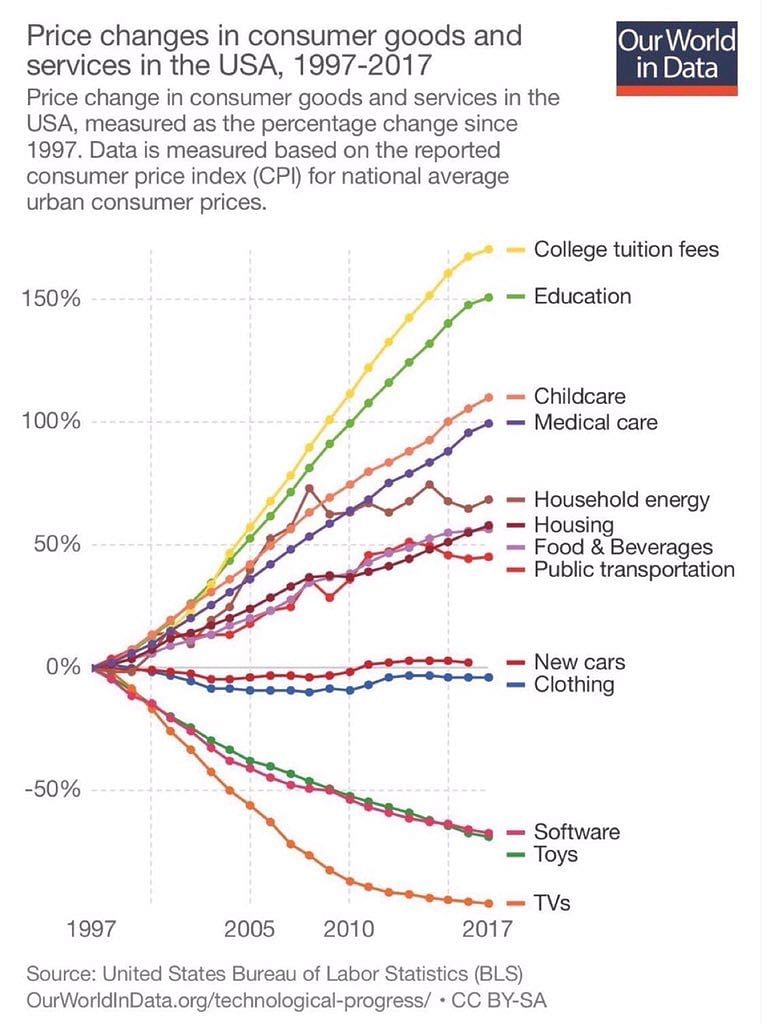 * Most of the bits company owns intangible assets which cannot be touched.

* While intangible assets do not have a physical presence, Intangible assets are long-term assets, which include goodwill, brand recognition, copyrights, patents, trademarks, trade names, and customer data.

* Most of the atom companies owns Tangible assets are items of value that you can touch. Examples of tangible assets include furniture, computers, buildings, and vehicles, land, Inventory, metals. 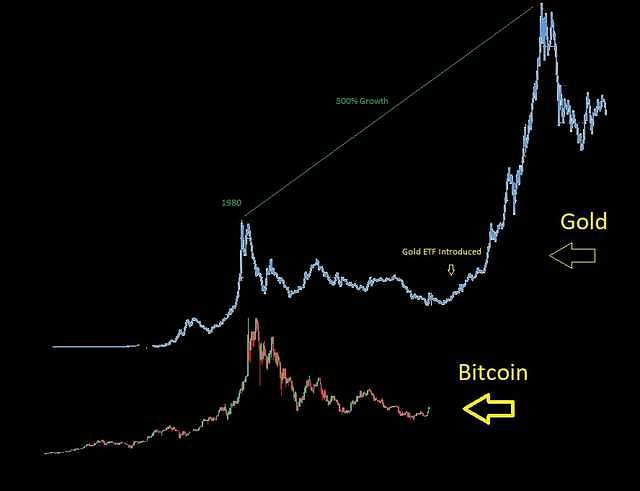 * It might sound utopian, In ancient India, peoples/kings wealth can be determined by the area of a land & number of cows they own (atom) & has not by the number of scholars, knowledge on the subjects. (bits invisible things)

The easiest way to understand the difference is to think about two investments.

If I invested 30K in a computer, I could get a really nice machine for that much today. I would have bought the ability to compute and share information. Fast forward 24 months, and that computer, according to Moore's Law, would be worth half of what I paid for it (i.e., twice as powerful computers would be available). In essence, I bought a deflationary asset - that same 30k would now buy me twice as much computing power.

Compare this to what would happen if I bought small land of 1lac. At the end of 24 months, I would have a modest appreciation. Thus investing in technology is deflationary, and investing in real assets is inflationary. This is why Buffet won't buy technology stocks - it's a bad store of wealth over the long term.

But software doesn’t work like this. Microsoft might spend a lot of money to develop the first unit of a new program, but every unit after that is virtually free to produce.

In general value of the tech companies increases over the time with the decrease in the cost of the product.

The world is changing faster than ever before. We live in a world of bytes — for the first time technology and commerce have collided in a way that makes data far more valuable than physical, tangible objects.From the above theory proves the values bit & atom are in equilibrium in nature & closely Interdependent on each other.

Singularity: Point at which, when the invention of Artificial SuperIntelligence (ASI) will surpass the computing power of the human brain, resulting in unfathomable changes to human civilization. It's a combination of Darwin's evolution theory & Moore law to form a singularity & decide the Future of Humankind.

The 4th Industrial revolution majorly fusion of bit & atom technologies. (Autonomous vehicle,3D Printing, Robotics, Drones). and these are the driving force for our future path that will fundamentally alter the way we live, work, and relate to one another. 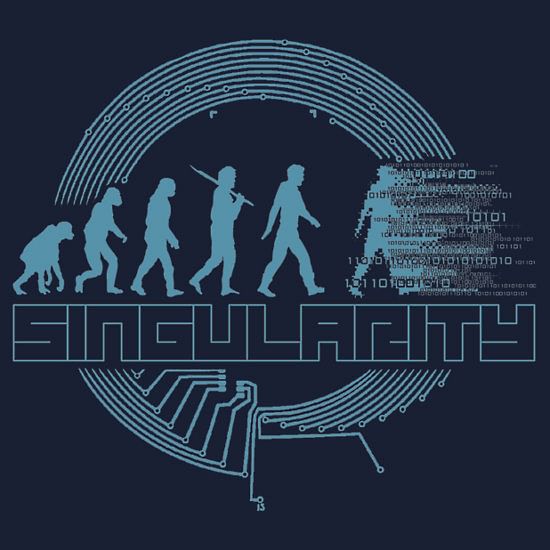 "While Mark Zuckerberg wants to help you share baby photos, Musk wants to save the human race from accidental annihilation " Electric cars, solar energy, rockets, Hyperloop their vivid portfolios (most of them are atoms)in musks baggage shows his zeal in the humanitarian welfare ‼️

The hardest problems are always atoms — they exist in reality (climate change, food production, pollution etc.) The bits are just tools to solve these problems. At the end of the day, bits without atoms are fire brigade without water.

Enjoyed this article? Click the 👍 to help other people find it.