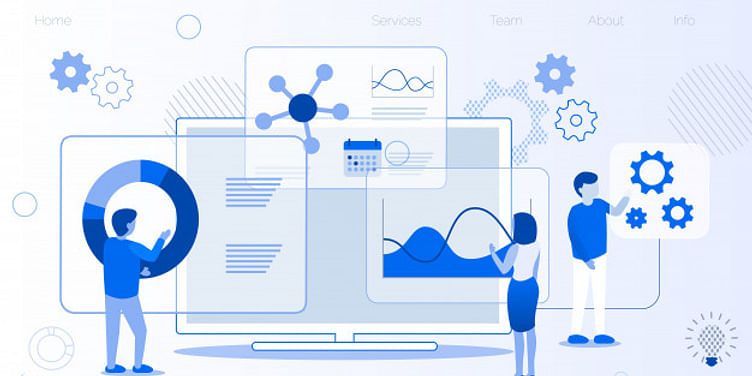 There was a time when companies used to rely on a particular type of device for carrying on their business. But things have changed drastically in modern times and businesses are trying to cater to a wide variety of devices ranging from tablets to smartphones and even state-of-art technologies such as wearables and smartwatches. Given the multi-device requirements, IT teams are under a constant obligation of coming up with mobile applications which can streamline the whole process by rendering support to Android and iOS device simultaneously. Maybe this is why more and more businesses are seeking out the help of tools for cross-platform mobile app development which can add inertia to the app development process and increase their productivity in the long run. Today we are going to share the way in which you can select the right cross-platform app development tools for the aid of your business.

Java was introduced back in the late 90’s with the aim of easing out the workflow as it could run everywhere after being written just once. Modern businesses are demanding such multi-environment tools which can cater to Android, iOS, Web and similar platforms at one go. The cross-platform app development tools can speed up delivery by simplifying the development process. These tools can be broadly segregated into two categories:

· First comes cross-platform hybrid tools which rely on common technologies like CSS, JavaScript and HTML5. They help in building apps that run within the native container of target devices. These codes can fasten the development process by splitting between platforms. They also come with a cheaper price tag in comparison with native approaches. However, these apps fail to unleash the full potential of the built-in capabilities of the device and cannot perform well as native apps.

· Next in line comes cross-platform native tools which serve as a blend of true native and a hybrid approach of app development. Intermediate language like C# and JavaScript is used for building multi-platform apps. These apps make use of native UI controllers in stark contrast to the hybrid approach and this helps them in unleashing the full potential of all device features. At the same time, they can also offer top notch app performance. However, their development is slower and more difficult than hybrid ones. The performance of cross-platform native apps is also inferior in comparison to the true native ones.

Cross-platform mobile development tools bring along various advantages to the table which have been lined out below:

· A single development tool makes the learning curve an easy one and even brings down the overall cost.

· The organization’s platforms can be built by a single development team irrespective of the type of mobile device.

· The cross-platform tools are specially engineered for helping in the development of state of art features such as image recognition, bar code scanning, text-voice and data connection which are required by all modern enterprise-mobile apps.

Small and medium scale businesses usually work on a stringent budget which in most cases cannot support both iOS and Android development separately. In such cases, they are greatly benefitted by cross-platform applications as this helps in adding inertia to their operational efficiency. Large companies can also benefit from such applications while dealing with the development work of smaller projects. The market is filled with a large number of cross-platform tools which can cater to both native and hybrid development.

Some popular hybrid tools are Framework7, Apache Cordova, Adobe PhoneGap, Sencha Ext JS and Ionic. Cordova is a common tool as it is used in the development of peer cross-platform hybrid tools like Ext JS, Ionic and Framework7. Both PhoneGap and Cordova was originated from a 2008 project led by the engineers of Nitobi web development company. The project got divided into two parts following the take-over of Nitobi by Adobe. While PhoneGap became an Adobe-branded product, Cordova took the shape of an open-source Apache product. However, both the platforms have retained a large number of similarities irrespective of the split.

Simple languages like JavaScript and HTML is used by both PhoneGap and Cordova for developing mobile apps. This makes the process comfortable. Organizations who have made investments in web development infrastructures can seamlessly transition to mobile app development with negligible effort. These tools can also be used by developers in integrated development environments like Eclipse, Xcode and Visual Studio. The cross-platform hybrid tools also bring along various other important attributes. Ext JS, for example, allows end-to-end app building with tools like Sencha Architect which supports drag-and-drop mechanism. Developers can undertake app generation by banking on ExtGen, the command-line tool of Ext JS. Sencha Cmdon the other hand helps with lifecycle management whereas ExtBuildis well-suited for building and transpiring apps.

Some popular cross-platform native tools are Flutter, Xamarin, React Native, Appcelerator Titanium and NativeScript. All these tools are compatible with cross-platform native development. However, they vary from one another in important ways. Most of them undertake app development by using JavaScript. Xamarin uses C# while Flutter uses Dart. These tools also have varying levels of custom coding requirement, app performance, availability of libraries, maturity and development effort.

Every organization has a specific set of requirements in terms of mobile applications. They need to choose a cross-platform mobile app development tool which shall be in sync with their specific requirements. In case of small companies employing less than 50 people, the focus needs to be on applications which can launch quickly without having to employ an expensive development team. For achieving this, companies can either opt for the commercial off-the-shelf products or the ones available in public app stores. Midsize companies employing up to 500 people have to deal with a mixture of consumer needs. They have to build apps for both Android and iOS users. In such cases, they can opt for cross-platform technologies like Titanium or Xamarin. .NET-based teams can easily migrate to mobile platforms coupled with the use of C# in Xamarin. Last but not the least comes large companies which employ 500 plus people and have more complex demands. They require sophisticated security features and mostly opt for a multi-tiered approach in terms of app development.