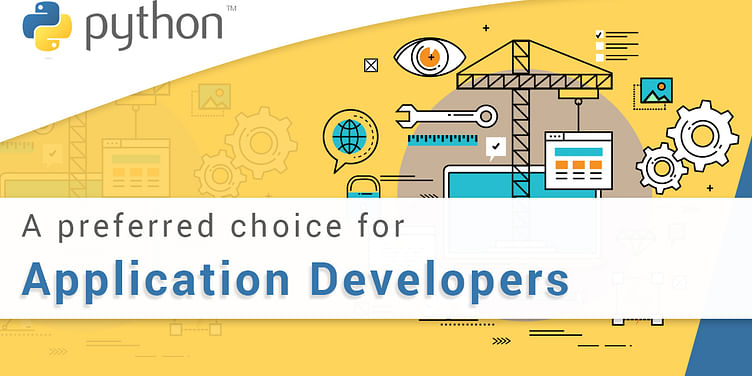 First released in 1991, Python has been liked and used by programmers all over the World. Python is considered to be one of the most versatile programming languages for building enterprise-level projects.

We have been providing Python development services for many years now and have established ourselves as an expert Python Development Company. In this blog, we will detail out some of the most critical applications for which Python can be used.

Be it any programming language, knowing about the application areas or more specifically to know the areas of development where python programming can play a crucial role in making things work in your favor.

No Python applications list is complete without mentioning web development, as it is one of the most popular areas where Python is used. Web development with Python is pretty easy because there is a typical back-end logic that goes into making many frameworks that support Python. A python developer has the luxury of gaining access to a vast number of libraries like https, FTP, and SSL.

Using the rich set of libraries and a large variety of web frameworks, a python developer can build high-quality web applications at a rapid rate.

Many Python-based mobile apps have made a name for themselves in the gaming community. You can use libraries like PySoy, which is a 3D game engine supporting Python 3.

Popular games like World of tanks, Disney's Toontown, battlefield 2, and Civilization IV have been built using Python. Python is also a popular scripting language for many game engines, and Python contributes to building various interactive games.

Python, combined with the C programming language, is a powerful combination used to develop many operating systems. Many Linux based operating systems like Ubuntu Ubiquity, Fedora, and RedHat enterprises anaconda installer have been coded in Python. Operating systems apps made with Python are powering millions of computers today.

In today's connected age, data science has taken prominence in providing businesses with invaluable insights about their most plaguing questions. The Python programming language provides the developers with a broad ecosystem of third-party packages like NumPy, Sci-Kit, and panda for analyzing the vast data sets fed into a data analysis system.

AI and ML models and projects are entirely different from your traditional software models, and they require different tools and technologies from those used in current software projects. Python application development has entrenched into this relatively new arena also.

You can use python packages like seaborn for data visualization, TensorFlow for machine learning, and SciPy for advanced computing. Building real-time applications with Python is relatively easy using the packages mentioned above.

Python is a simple, consistent, and platform-independent programming language having a huge collection of resourceful libraries. It is a positive one for developing desktop GUI applications as desktop applications developed using Python are efficient and fast.

The significant advantage that Python boasts  off is the English like syntax along with a modular architecture. Apart from this, the ability of Python to work with multiple operating systems and its rich text processing tools make Python the best choice for building desktop-based applications.

Building embedded C software applications with Python is easy as it is a programming language that is based on the C language.

Raspberry Pi is a well-known embedded application that uses Python for performing elaborate high-level computations. Computing high-level applications on smaller devices is relatively easy with Python, and hence it is a popular language amongst embedded system developers.

Web scraping applications are those applications that are designed to extract data from websites. This data is then used in many different processes like job listings, price comparisons, and research & development.

Many Python-based web-scraping tools like scrapy, Python requests, Mechanical Soup, and Beautiful Soup make the job of a python developer easier. Web scraping applications are written in Python prove to be high-quality apps.

The Python programming language is used by many developers to design and build various 3D imaging software like GIMP, Paintshop Pro, and Scribus. The versatility and flexibility of Python allows developers to build even 4D packages like Maya cinema 4D and Lightwave.

Fandango is a well-known application built with Python.

Popular music apps like Spotify have been built using Python. Specific libraries of Python, like openCV and PyDub help the python developers in building state-of-the-art audio/video applications. The high-level functionality provided by these python libraries is unmatched. This is the reason why many python developers are developing outstanding audio/video applications in Python.

Some famous applications built with Python

Python is one of the most versatile languages available in the developer world. If you have chosen Python, then you have taken the first correct step towards building an excellent project. The second step would be to hire python developers who have the required experience in managing complex python projects. We at Prismetric have a team experience in developing high-quality python projects. Our development team will aid you in achieving your aim of building an excellent python project.

Three most common predicaments of an early stage entrepreneur