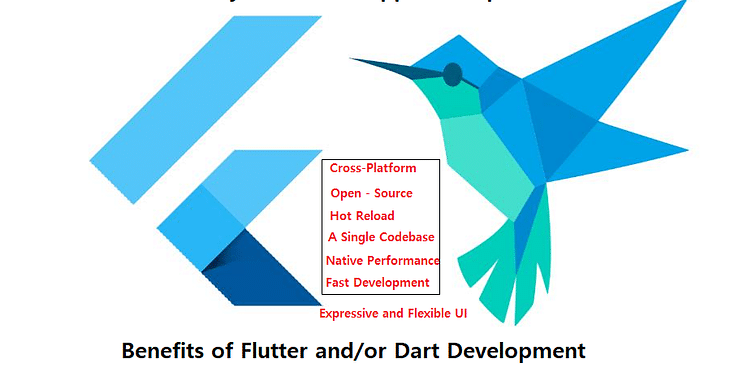 Why Flutter App Development is taking over and what are the benefits and features of Flutter Development.

Flutter is an open-source SDK that developed by Google and released in 2017. It developed on Dart Programming language. Dart is a new object oriented programming language and it's compiler build on c++. Flutter build specialty for speed up the development process with the cross-platform nature. When it was released it was using for only cross-platforms mobile app development. But now after releasing Flutter 1.9 it has been use for web app along with Mobile app development.

There are lot of benefits of Flutter Development but here i am listing out the following that are most important and easy to understand before go dig into Flutter.

Open-Source: It is an open source and developed and maintain by Google so that is must treatable and feature keep updating as per Google standard. It is free to use for personal as well as commercial and since it is an open-source it has been huge growing community that helps you to get your answer if you have been getting or you will get while developing your Flutter app.

Cross-Platform: It allows building cross-platforms native apps that help you to build app faster and one app will work on multiple platforms like Android and iOS both. It's inbuilt widget development features automatically adjust your app style components (Like button, Menu, Text, and others) based on devices that allow user to feel like native apps.

Fast Development: In Flutter everything is widgets. So you can build widgets as er your mobile app component. it's Stateful Hot-Reload features and fully-customizable widgets feature helps you to build native app interface in minutes. So now design your app wire frame get it live with Flutter Fast Development.

A Single Codebase: Flutter has a single codebase. It means now you don't required multiple codebase to develop your app for multiple platforms. Now a single code will work for both Android and iOS app. So with Flutter you have to write only one code for your app while development and it will work on both platforms. It's in build feature automatically adjust with platforms native behavior and incorporate with your mobile component like List, Menu, Text, Images and others.

Hot Reload: It has Stateful Hot-Reload feature that helps developer to build their faster and debug their app while developing. Unlike the previous app development if you have to do changes then you have to build recompile, build grid, and build package to see what result will come and it consume a lot of time. Now with Flutter Hot-Reload show the result once you save your code on your development editor tools that helps developer to debug their code faster and fix it.

Native Performance: Flutter's widgets will incorporate automatically with all important platforms differences, Like Scrolling, Icons, Menu, Text, Navigation, Fonts and others, so that your mobile app perform like a native app for both Android and iOS and user feel like a native app as per their devices.

Expressive UI: It has awesome in built feature that help you build an expressive and beautiful UI for your APP. It has inbuilt material Design UI and Cupertino (iOS-Flavor) widgets that helps you build a great and expressive UI. Along with it has rich motion Application Programming Interface (API), Natural Scrolling, and platform awareness. So now give a easy and beautiful UI app for your users with Flutter and let's enjoy your user with your app without any more hustle.

Why You Should Choose Flutter Development?

Now you have check the main features of Flutter and what are the benefits of all above features. Now some important point about why we should choose Flutter for app development? Here i mention some point that is does matter for any business it might help you why to choose Flutter.

Time: It has single codebase feature and hot-reload features that allow to build one code only and that app will work on both Android and iOS platforms. So you can save a lot of time while it has been taken while developing a native app for Android and iOS separately.

What are companies are using Flutter?

There are top companies using flutter. I am listing some of world best companies that is using Flutter.

Like that there are others companies have been start using Flutter you can see Flutter Showcase flutter.dev/showcase