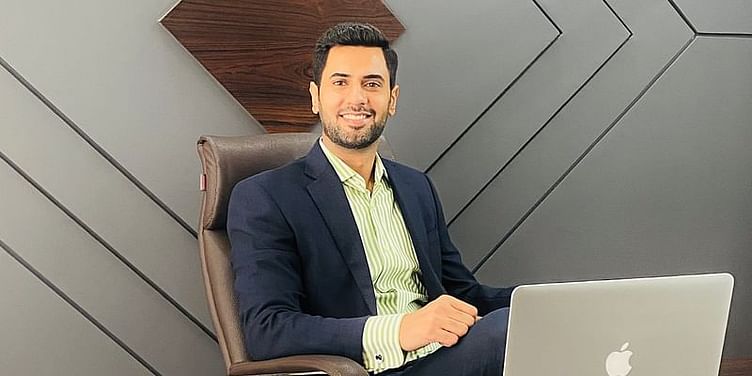 Add Veda, backed by Olympic sharp shooter Abhinav Bindra, was launched by Ankush Passi in 2016. It offers over 34 products through its website and other ecommerce platforms.

COVID-19 has been an eye-opening experience for everybody, but most of all, for those who were taking their health for granted. The pandemic has forced people to rethink and pick healthier and sustainable food options to become better prepared when faced with a crisis like COVID-19. Moreover, Ayurveda, which focuses on curing illnesses using natural herbs, has almost become a buzzword over the last few months.

With so much happening in the Indian Ayurvedic space, this industry is touted to grow bigger and busier in the years ahead.

This week, SMBStory spoke to Ankush Passi, Founder and CEO of ﻿Add Veda﻿. Add Veda is an Ayurveda-based products company founded in 2016 with its head office in Ludhiana and corporate office in Gurugram.

The company manufactures and sells over 34 products on online platforms like Amazon, ﻿1MG﻿, ﻿Lybrate﻿, ﻿BeatO﻿ app, and also through its own website. These products are priced between Rs 350 and Rs 2,400. Add Veda is backed by Olympic gold medallist and sharpshooter Abhinav Bindra and Franchise India company. Abhinav is also the Brand Ambassador. Ankush says that the backing is not in cash but more in terms of marketing.

Ankush’s father, Jogesh Passi, is an Ayurvedic doctor in Punjab. He says that since childhood he was exposed to the industry, and was often intrigued by how people with chronic ailments were cured by this stream of medicine.

For Ankush, there was no single tipping point or a ‘Eureka’ moment when he decided to enter this space like his father. “In a way, it was always planned. I had this vision that while my father had limited reach, I will build an Ayurveda business whose reach will be much bigger and better.”

Ankush completed his graduation from Delhi University’s Shri Ram College of Commerce (SRCC) and joined a cousin’s ecommerce company. This is when he realised the potential and scope of India’s internet economy. In 2016, he launched Add Veda’s website, and also launched a few products on Amazon.

The products are manufactured in the company’s unit in Ludhiana, Punjab. Ankush further says that Indian raw materials are so good that they source everything locally and don’t import at all.

According to estimates, Ayurveda, often touted as the “sunrise sector of India,” is pegged to be a Rs 30,000 crore industry in India. A landmark move by the Narendra Modi-led government was the formation of the Ayurveda, Yoga, Unani, Siddhi, and Homeopathy (AYUSH) Ministry in 2014, which has given this sector a further impetus.

While this leads many to believe that the Ayurvedic sector’s prospects are extremely bright, Ankush points out a concerning trend in the sector.

He says, “There is an influx in the Ayurvedic market nowadays. There are a lot of people launching Ayurveda-based supplement startups. People feel that they need to launch something in this space because it is the flavour of the season.”

Since his father has been an Ayurvedic doctor for more than 30 years now, Ankush says he realises the importance of research and development before launching a product.

“There are a lot of casual attempts in the market, which is not good. For instance, I have seen brands using just one herb in toothpaste and calling it an Ayurvedic product.”

He says that a pure Ayurvedic product is one that follows the rules and regulations with regards to purity, quality, and potency. He adds that most sold-out products include the ones in the joint-pain and men’s sexual wellness categories.

He further says that Patanjali started a wave a few years ago that has bolstered the adoption of Ayurvedic products, and he personally derives inspiration from brands such as ﻿Kapiva﻿ and Dr Vaidya’s. India does not have a dearth of Ayurvedic brands. It houses giants like Baidyanath, Vicco Laboratories, Emami, Dabur, Hamdard, etc.

Abhinav Bindra, whose venture fund Shooting Stars LLP is backing Add Veda, told SMBStory in an email interview that he is rooting for Ayurveda. “Healthcare is one of our focus investment sectors along with sports medicine and technology. I believe the Ayurvedic industry has a huge potential for global scalability.”

Ankush says that he wants to position Add Veda as a direct-to-consumer (D2C brand) brand, selling through its website and niche marketplaces. “We are not focusing much on Amazon. By selling on healthcare marketplaces such as 1mg and Lybrate, which have a select audience, it is easier to reach out to your target customers. Through their forums, they ensure that the customers are made adequately aware of the right product for health concerns.”

Ankush doesn’t reveal the company’s turnover but says that it sells more than 2,500 units on a monthly basis, and was clocking sales worth Rs 20 lakh (monthly) in the pre-pandemic times. He shares that his long-term goal is to make Add Veda into a Rs 100 crore-brand.

Abhinav and Ankush have scouted through the European markets, where they plan to launch once the pandemic subsides. Ankush says he also plans to launch in the US and the Middle East, where Ayurveda resonates with the people.

He also adds that while the pandemic-led lockdown resulted in a freeze in production and zero sales, the Add Veda team utilised this time to further research about some of the products they were planning to introduce for a long time. When the economy started to bounce back, Ankush launched 14 products into the market with ingredients such as Giloi, Ashwagandha, and Curcumin.

Add Veda offers products only in the dry form - capsules and powders, but going forward, it plans to change that as well. The company has plans to raise capital in the future to introduce some new range of products such as Ayurvedic chocolates.