Leading the world, this Delhi-based manufacturer has been enabling oral care for 50+ years 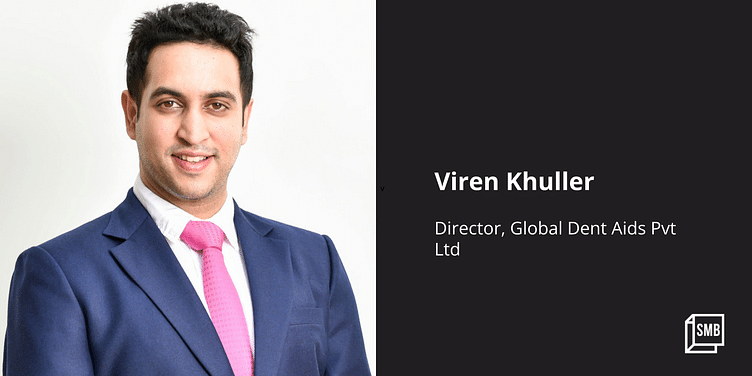 Global Dents Aid Pvt Ltd, under the brand name STIM Oral Care, is one of the oldest and largest manufacturers of interdental brushes in India. Started in 1965, the company now makes 1.4 million brushes every day, and raked in Rs 150 crore in revenue in FY22.

If it were not for toothbrushes, we would be visiting dentists every other week. They are essential to our daily hygiene, especially in India, where 90% of all adults suffer from dental cavities, according to the Indian Dental Association.

Amid growing awareness of the benefits of brushing twice a day, the toothbrush and replacement heads market in India grew at a Compound Annual Growth Rate (CAGR) of 8.76% between 2015-20.

One of the major contributors behind this growth is Global Dent Aids Pvt Ltd, the parent company of STIM Oral Care. Based out of Delhi, it has been making interdental brushes since 1988, and is one of the world’s largest manufacturers in that category, leading brands across 10 countries, including the UK and the US, as well as in Europe.

Started in 1965 by Late Vir Dev Khuller, Global Dent Aids initially operated as a trading company to sell oral toothbrushes in India. His son, Vineet Khuller, observed the evolving demand for interdental brushes—which have small bristled heads to clean between the teeth. Seizing the opportunity, he set up a factory in the early 90s and there has been no looking back since.

Speaking to SMBStory, Viren Khuller, the third-generation entrepreneur and Director of Global Dent Aids, talks about how the company has remained relevant despite low over-the-counter penetration, and steady competition from brands like Oral B and Colgate.

“Growing with the evolving demand has been our business mantra,” says Viren, as he recalls how his grandfather came upon entrepreneurship. While working with Colgate in the 1950s, Vir Dev realised that there was a demand for small-headed toothbrushes which were rarely available at that time.

“The trend back then was to use large-headed toothbrushes, but my grandfather had experience in regularly dealing with customers, understanding their needs. He was quick to implement the same in his own business. Thus, in 1988, he connected with vendors across India to set up STIM Oral Care as a trading business,” he recalls.

Back then, Viren says that retailing was done through distributors via general trade, including for kiranas. In the late 80s, when Vineet joined the business, he worked towards strengthening the business operation by taking hold of the manufacturing process.

In the early 1990s, the father-son duo had set up the manufacturing base in Noida and started approaching customers through pharmacies and dentist recommendations. The company had also started prepping up the export chain and began white labelling for global brands by the mid-90s.

Today, Global Dent Aids manufactures 1.4 million (14 lakh) brushes per day in its four facilities located in NSEZ Noida. In FY 21-22, the company earned a revenue of Rs 150 crore, and Viren says in the last year, its domestic vertical grew by 40% in revenue.

Viren says the business has stayed relevant because of the trust of doctors and customers.

“We have around 50-60 product ranges that give dental solutions to both—children and people later in their lives—which not many companies are doing in India,” Viren underlines.

Rigorous expansion on the cards

“India is far behind in oral care. The industry is still growing and there is immense opportunity to grow,” says Viren, adding that while STIM Oral Care is currently available for customers via dentists, in the following year, the company is planning to expand to over-the-counter pharmacies.

“It is very difficult to change a habit, especially in India. There has to be consistent efforts to reduce plastic usage,” he adds.

Talking about challenges, Viren says that keeping a track of distribution and sales is haphazard and to overcome this problem, the company worked on introducing a full ERP system—including an inventory module, sales reporting, and accounting for lean manufacturing and trading line. This helped the company resolve issues of potential stock-outs, and maintain a cash flow for the company.

In the next few months, the company is also planning to introduce an app for its sales and distribution team, which will help in strengthening the supply chain process.

“We have rigorous expansion plans in place as the demand is also growing rapidly. We are also aiming to export our range of products to various countries including, Turkey, Malaysia, Singapore, Thailand, and Germany,” Viren signs off.

From Rs 46k to Rs 23 cr, how this college dropout built a successful construction company

From a pushcart to 10 outlets, the story of Bitti Tikki Wala