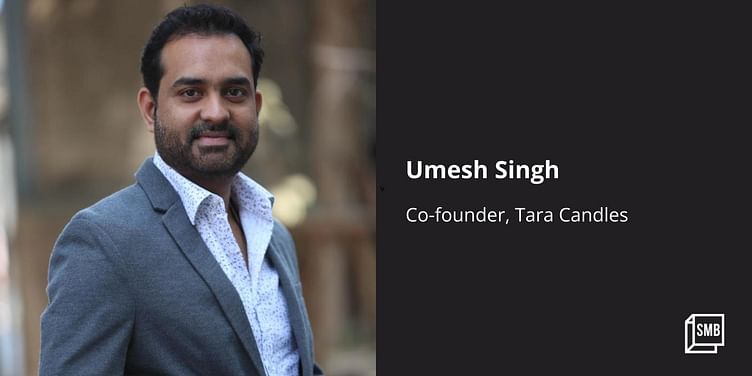 With 15,300 SKUs and 156 varieties of aroma candles, Tara Candles has established a name for itself in the Indian market and is outlining a strategy for global expansion.

With fragrances like lavender, rosemary, cinnamon, and even masala chai, candles have metamorphosed from utility to an essential part of home décor.

The scented candle market is expected to garner a market value of $5.4 billion by the end of 2032. While India is one of the leading exporters of candles globally, domestic demand for these candles kicked off during COVID-19 as users found the benefits of using these candles in aromatherapy as well as festive gifting.

Capitalising on this trend is Mumbai-based ﻿Tara Candles﻿, which manufactures around 156 varieties of aroma candles and has 5-star hotel chains, including ITC Hotels, as its customers.

In an interview with SMBStory, Umesh Singh (44), Co-founder of Tara Candles, talks about the evolution of the scented candle market in India and his two-decade-long journey to master the art of candle making.

Making of a candle brand

While Umesh has been successfully running a profitable business for the last 20 years, the journey to build a brand hasn’t been easy. One of the first in his family to choose entrepreneurship over a job, Umesh started to look for a business idea that would resonate with his passion immediately after completing his graduation in organic chemistry.

“I am a creative fellow and doing a 9 to 5 job never excites me. After my formal education, I did a diploma in handmade paper making in 2001 in pursuit to start my own paper business but I was too naive to understand the market and found it a big struggle to sustain that business and failed,” recalls Umesh.

Belonging to a family of educators, doctors, and administrators, his father wanted him to be a teacher but Umesh stuck to his passion.

“Now, beggars don’t have a choice and I had to keep trying. That time, customised gifting was booming and I was open to doing any kind of business where I could use my creativity and hence, I used to take gifting orders from people for birthdays, anniversaries, and weddings which opened my way to corporate gifting.

Corporate gifting picked up momentum in the late 90s and while Umesh had made contacts and was getting good recognition for his creativity, business was still slow. But things took a turn in 2005 when he received an order from Emirates airlines for its convenience place in Khar, Mumbai for scented candles.

“The easiest way was to trade candles and resell them to Emirates, but instead, my wife, who had an understanding of candle making and I decided to make candles on our own,” he says.

Umesh and his wife Richa were excited about their first order and made 40 candles out of 23 kg wax. Though they fulfilled the order on time, Umesh says that they were the worst candles they have ever made.

“That order will always be close to our heart as while completing that, we learnt so many lessons on candle making which theoretically we never would have. Gradually we mastered making different variants of scented candles, smokeless candles, my organic chemistry background worked here, and by 2005, we were ready to kickstart our full-fledged candle business,” he adds.

Tara next bagged an offer from JW Marriott in Juhu followed by Taj in Colaba.

“If you are able to sell in the hotel industry, you can sell it anywhere,” says Umesh and today, the company has catered to more than 100 clients across the country and is expanding its footprints internationally associating with distribution partnerships.

When asked how Tara Candles stands out from the competition, including the leading players in India like Ekam and global brand Bath and Body Works, the founder says Tara Candles USP is its product line.

“We have created more than 15,000 SKUs so far which is not even 2% of what our competitors offer. Why have I never been replaced from these hotels? I have been supplying them with candles for the past 10 years. It is only because of my quality,” Umesh says.

Besides supplying the hospitality industry, Umesh has a strong clientele in the pharmaceutical and logistics industry. He brings out that for more than a decade, he has been customising candle design for corporate gifting for these industries, dedicating new designs every time on particular days and occasions.

The candles are priced between Rs 225 and Rs 425 on their D2C website.

Bringing Indian-ness into the product

Tara Candles products are made at a facility located in Goregaon East. Its moulds are made in-house and raw materials for fragrances are sourced from across India.

Amid the COVID-19 pandemic, many small businesses explored a D2C strategy. Umesh, too, decided to venture into online commerce and in 2021, launched a D2C website to cater to reach out to consumers directly.

The founder attributes the success of Tara Candles to the Indian-ness of its products.

“You can see in all my candles, their name starts with a Hindi alphabet. That’s my emotion with the product and my country. I want to be vocal about the origin of the products,” he adds.

Umesh further adds that during a meeting in Singapore to discuss the possibility of setting up Tara Candles distribution in the country, the distributor was attempting to say the name ‘Kerala ki Kalimirch’, ‘Arunachal ka Parijaat’ in Hindi language. This made Umesh feel proud of the fact that he is taking India’s fragrances to the world.

The UK and the US are top consumers of scented candles. For Tara Candles, the next step in its expansion is setting up distributors in 18 countries including the Philippines, Canada, North America, etc, and also scaling its D2C business.

Umesh declined to reveal the growth percentage of its D2C business over the last year but insisted that the result will appear by next year since it is new to the online space.

These 5 businesses from Jaipur are making India Aatmanirbhar