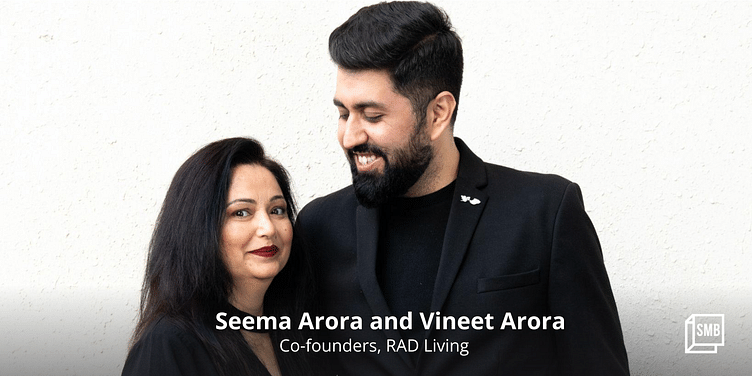 RAD Living is a premium candle brand that was started in 2020 by mother-son duo Seema Arora and Vineet Arora from their home. Making candles completely in-house, the brand has made Rs 85 lakh in revenue since inception.

When the stresses of the day seemed to take over, Vineet Arora often used candles and diffusers while meditating.

“I love these soothing aromas. During the lockdown, when I would get the candles or aroma oils, I would think about more possible variants of candles and fragrances. My curiosity and analysis of the big market of candles that is still untapped in India got me to start the candle business,” he says.

Now, nearly a year and a half later, Vineet and his mother have a brand that turns around Rs 85 lakh in revenue, and is gunning for nearly Rs 2 crore by the end of the fiscal. Their brainchild is ﻿RAD Living﻿ - a premium soy wax candle company, whose “relatable” candles help them stand out among top players like Ekam, Niana, and Doft Candles.

Till date, Vineet is asked why he started the business. “Truth be told, there was no goal! It started more like a family project while we all were at home due to lockdown. Seeing my family work as a team, using their respective strengths and meeting every new challenge that came our way, I learnt a whole new meaning of entrepreneurship and resilience,” he says.

‘The bright side of 2020’ was one of the first campaigns that it launched - from Vineet’s bedroom. None of this would be possible, Vineet recalls, without his mother.

“My mom is the person behind the success of our business. The way she dedicated herself to experimenting with the making of candles has made us reach so far,” he says.

Ask Vineet and he’ll tell you, what sets RAD living apart is the company’s branding. At the outset, it was clear he did not want to make “spa-like” or soothing fragrances, rather something that connects with people.

“We introduced varieties of candles dedicated to different kinds of spirits that exist in this world like foodies, gym freaks, travellers, bathroom singers, makeup hoarders, new found bakers, and many more. Mom and I loved this concept. It is an easy gifting option you see when you know what exactly you need to pick plus it's a personalised gift already customised for you,” he explains.

When the collection launched, it sold out like hot cakes, Vineet says.

Since then, RAD Living’s portfolio has grown – it has around 200 SKUs, with new collections launched four to five times a year. It has also opened a production facility and an office in Noida.

It managed to get this far by maintaining a Direct to Consumer (D2C) approach. This involves betting heavily on social media ads. Vineet recalls that on the first day of running these advertisements, he received an order from a Gurugram-based customer who was a stylist.

There has been no looking back!

There is only further scope for RAD Living to grow. According to the Ministry of Medium and Small Enterprises (MSME), the traditional fragrance industry in India has seen vast changes in recent years. The global fragrance and flavour industry is worth $24.10 billion, of which India contributes approximately $500 million.

Not as easy as it looks

For Vineet and Seema, the first hurdle was to get the right prototype. Talking to SMBStory, they say that it took them four to six months of trials before coming up with a launch in October 2020. Then came the weather - and they learned that the candles needed to be made differently as opposed to what they already knew.

“I vividly recall as I poured one of the batches during mid-November for that first bulk order and waited for it to cool down, a few candles demoulded while the others had sinkholes,” Seema says.

Seema re-did a smaller batch the next day to see if her observation could resolve the issue but it happened again. “We realised that due to a sudden drop in the room temperature due to winters in Delhi, the wax touching the (colder) glass container would cool down much faster and contract. This meant that a re-adjustment in the base recipe, especially temperatures of the container and pouring temperature, was required,” she says.

It was also then that Seema realised that there is a dedicated science behind this 'art of candle making' and that it wasn't as easy as one might think, especially since Vineet and Seema had acquired the skills to make them on their own.

It appears that RAD Living is well on its way in this mission. The brand is placed at a store in Goa by Vikram Phadnis, and aims to be placed at about 100 stores by next year. It  is also listed on all major decor marketplaces such as Propshop, LBB Home, Jaypore, June Shop, and Amala Earth.

The price range of RAD Living candles starts from Rs 700 and goes up to Rs 2,500. It has also designed a gift box that goes up to Rs 9,000. According to Vineet, there is a return rate of 25% to 30% of online customers who buy RAD Living’s products every two-three months.

As for the future, Vineet says that they will continue experiments to bring in more fragrances and varieties in their candle ranges. The brand will soon look at adding reed diffusers, essential oils, room fresheners, and car fresheners.

“Expansion outside India is on the charts,” says Vineet, adding that India is still at a developing stage of understanding home fragrances and scented candles.

“Overall, we want to build the brand around the home fragrance category as it is expected to see huge growth in the next five years, in India in particular,” Vineet signs off.