From earning Rs 250 a month as a newspaper boy to launching a fashion production house, read how Bengaluru boy Sid Naidu found success 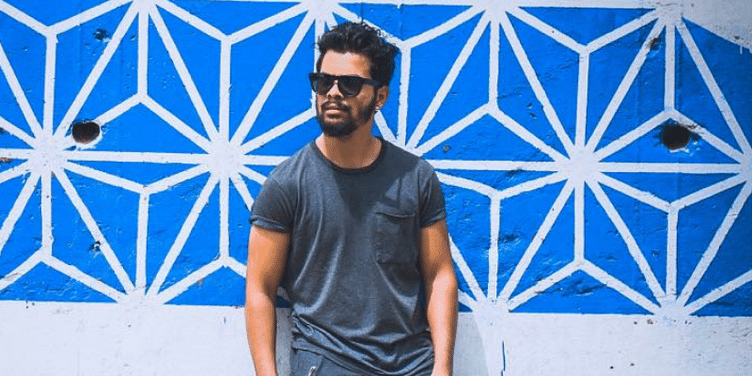 In 2007, eleven-year-old Sid Naidu from Bengaluru lost his father. To support his family, he started distributing newspapers before going to school. He earned Rs 250 per month. However, the financial situation at home remained grim.

Naidu’s dream of entering the fashion industry and becoming a model seemed even more far-fetched at this point. He wasn't sure if he would go to college. But what could he do? After completing Class 10, Naidu started working as an office boy, earning a meagre Rs 3,000 per month.

After ten years, in 2017, he decided to leverage his network and become an entrepreneur. He launched Sid Productions, a venture which dabbles in fashion shoots, model grooming, art direction, print ads, TV commercials and more. In just a year, Naidu's business boomed and recorded a turnover of around Rs 1.3 crore. Sid Naidu is now targeting a turnover of Rs 3 crore.

“After my tenth standard, I used to travel to work in the same bus as my school friends who were going to college. I used to feel bad because they degraded me,” says 27-year-old Naidu. “Now, these same people are looking up to me with awe.”

According to Naidu, people see him only for his success and not for all the hardships he had to endure. Therefore, the question beckons: How did he turn his life around so drastically? Further, what fuelled his desire to follow his passion?

In an interaction with SMBStory, Sid Naidu reveals the answers, and shows how the almost-derogatory term '10th pass' means nothing if one can fuse passion with hard work.

SMBStory: How did you move up from being an office boy?

Sid Naidu: My mother used to work as a clerk in an industrial factory, and I joined a full-time job straight out of tenth grade. I worked as an office boy for a chartered accountant in Jayanagar in Bengaluru. The job was difficult to land, because not many would employ a 15-year-old. I left in a month or so, and struggled to find another job. One way or another, I shuttled between jobs at Daily Bread and NewU. Over these years, I had matured from being a mere office boy to handling an entire store.

When I was handling a NewU store at Mantri Square Mall, something interesting happened. I started making friends with the marketing and operations team of the mall, and became close to Ullas, who handled events there. As luck would have it, Ullas was about to quit and told me to replace him. I landed the job and began working with stakeholders in the event management sector.

SMBStory: Why did you move from mall operations to launching your own fashion company?

SN: I wanted to quit my job at Mantri because I wasn't too happy with it. I was earning Rs 15,000 a month and travelling a long distance each day by train. I found that my friend Ullas was now working with a dedicated event management company. I told him that I didn't want to work at a mall and I wanted to enter the larger event management sector.

In a huge recurrence, Ullas was about to quit his event management job, and once more, I replaced him. The company - SquareOne Experiential Marketing - had a fashion background and helped market and manage a few fashion brands in Bengaluru. Working here helped me build my fashion portfolio and relationships with the relevant stakeholders. I gained end-to-end knowledge about fashion and events, handling clients, building a network, and technical skills such as using computer software. I had certainly come a long way.

While I was working here, I was also freelancing. In July 2017, I freelanced for Vogue Magazine and was responsible for the cover picture. This went viral. I also freelanced with many other magazines and stakeholders. They wanted to give me more projects, but felt that I should have my own business. Keeping all this in mind, I felt the time was right to branch out on my own. I quit my job at SquareOne and registered Sid Productions in 2017.

SMBS: How did Sid Productions take off?

SN: I didn't have any clients when I started and I was posting my work on social media to garner attention. The turning point came when Myntra saw my work. They approached me and gave me a five-day campaign shoot worth Rs 15 lakh. This amount of money sounded crazy to me back then.

However, there was investment required from me to make ends meet for the shoot. I had only Rs 1 lakh in my pocket, and I had to borrow from relatives and friends to reach the required Rs 6-7 lakh. I had to pay for the studio, props, flights for models, etc.

Everybody helped me in whichever way they could, and I finally had the money. I managed to conduct the shoot, but it was not profitable because it cost me Rs 15 lakh by the time it ended. However, this was a milestone and I knew I would receive more projects from Myntra. I was right and multiple projects came, and so did the money. They trusted me despite the fact that there were bigger agencies who could do the same work. Now, I charge Rs 1 lakh per day just for my presence on site.

SMBS: What other projects do you work on?

SN: Myntra is my biggest client, but I also work with Future Group's fashion brands such as Scullers, Jealous 21, Indigo Nation, etc. I also work with Lifestyle and Max. They started hiring me for fashion shoots, store launches and influencer events. I am good at propping and set design, and made my mark with my clients. The clients are also happy because of my extensive network. I also organise corporate events and conferences for other clients. RazorPay is an example.

However, my focus is fashion and creating value. There are other agencies who handle a range of tasks and do it for the money. But we are unique because of my passion, emphasis and specialisation in handling fashion shoots and events. Currently, I work from home and handle all my projects. I have a dynamic, ten-member team of passionate artists who work from their locations, but we employ between fifty and eighty people when we have a campaign or a shoot.

My brother Kiran Naidu, who is a fashion photographer, is also part of this circle. Overall, we don’t need to invest in traditional assets nor have employees on payroll. We pay for the logistics of a shoot, compensate team members for each campaign, and bill the client.

SMBS: What are your challenges in terms of sustaining and growing the business?

SN: Shoots sometimes extend beyond the estimated time. Handling the artists, models and permissions, especially when shooting outdoors, is very tricky. When we did a shoot near Vasanthnagar, we also had to deal with cops even though we had all the necessary permissions. Further, models sometimes back out at the last minute, and I have to find a replacement in a very short span of time.

Client payments are another issue. They don’t always come in within thirty days, and can extend upto ninety days. I have to watch out for all these things and I am able to stay afloat through this kind of multitasking. For anyone new in the sector, I urge them to multitask and create a lot of value for clients. They also need to work extremely hard and stay true to their passion.

SMBS: What are your future plans?

SN: I want to expand within my current verticals and build my brand in the Indian fashion industry. Now, with more projects coming in, I aim to take Indian brands to shoot in locations such as Thailand, Siberia and South Africa, all at reasonable costs. I am building my contacts abroad to slowly make this a reality. I also want to do a single project worth Rs 1 crore.

Keeping everything in mind, word of mouth works really well to make everything happen in the industry. People involved in shoots and campaigns talk to others in the sector. I also promote my work on social media. I am planning to invest in office spaces in Mumbai and Delhi, as these are network hubs for the fashion industry. I also have an inkling to go back and study film direction. My dream is to work with Sanjay Leela Bhansali and enter Bollywood movie direction and production.