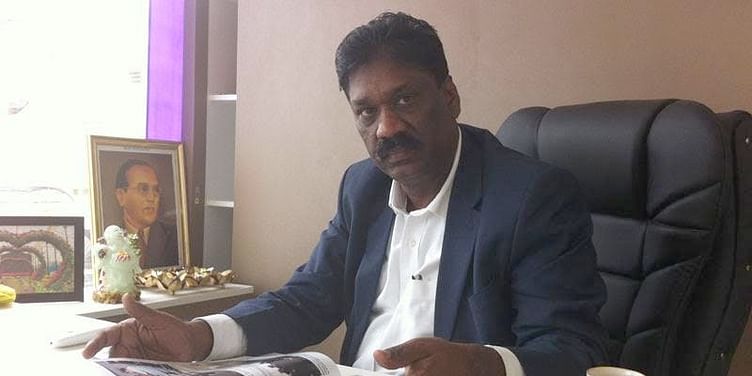 At 17, Raja Nayak ran away from home. Like millions before him, he wanted to escape the punishing life that poverty inflicts on its victims.

“I knew I had to earn money. I wanted to earn big money. That was my only focus then,” Raja Nayak, 54, tells me as we settle down in his plush new office in Bengaluru for the interview. “I had realised as a young boy that it was very hard for my parents to send me and my four siblings to school. My father did not have a steady income and my mother had little to make ends meet often pawning whatever little valuables she had,” he says. 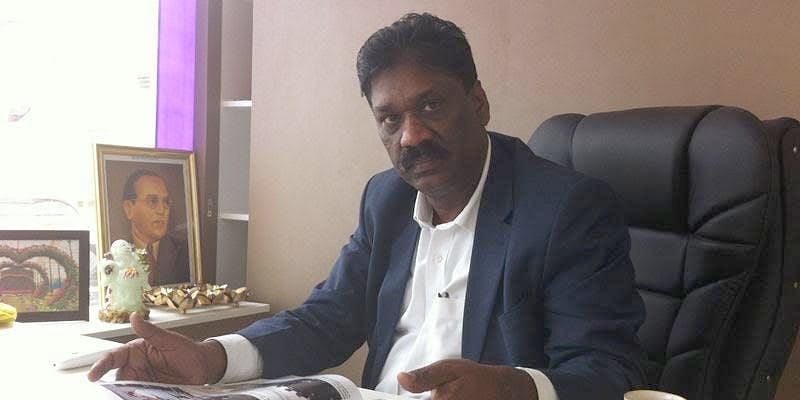 The penny dropped when Raja was loitering with his neighbourhood friends and was persuaded to watch a Hindi movie. It was the 1978 film, ‘Trishul’, where a penniless Amitabh Bachchan eventually goes on to become a real estate baron.

Those three hours in the dark theatre ignited Raja’s mind and future path as it were.

“I was really taken up by the story. It felt so real to me. Suddenly, I believed that it was possible to make my dreams come true. I wanted to be a real estate baron too,”

Raja says with a smile, quickly brushing off the source of his inspiration.

Riding on this belief, he escaped to Mumbai (Bombay then). But it wasn’t going to be that easy, was it? He returned home heartbroken, but his mind was constantly engaged in finding the right break.

Today, Raja has a total turnover of Rs 60 crore from his various enterprises that include MCS Logistics, a company he established in 1998 in international shipping and logistics, Akshay Enterprises that’s into corrugated packaging, Jala Beverages that manufactures packaged drinking water, Purple Haze that is in the wellness space with three beauty salon-and-spa centres in Bengaluru. Nutri Planet (with three other directors and partners) that is working with CFTRI to bring products like energy bars and oil made out of Chia rice. Besides these, he also runs schools and a college under the banner of Kalaniketan Educational Society for the underprivileged and disadvantaged sections of society.

Raja is also the President of the Karnataka chapter of Dalit Indian Chamber of Commerce and Industries (DICCI), where he says, they are inspiring the disadvantaged sections of society to dream big. “We are making them aware of the opportunities available to make their dreams come true,” he says.

The first take: small but sure

Son of Dalit migrants from a village in Karnataka, Raja was born in Bengaluru (Bangalore then) and spent the first 17 years of his life in the city without much exposure to the life outside. “Back then in the late 70s and 80s, Bangalore was a sleepy town. But I had this Punjabi friend, Deepak (who is no more), who had seen many more places than I because his father had a transferable government job. We lived in the same locality and I would end up spending most of my time with him.”

Raja gave up studies while he was in first PUC, and with Deepak as his partner decided to sell shirts on the footpath. “I had seen people selling wares on the footpath and some traders had even offered us money to sell it for them. We realized if they could make a good business out of this, why not us?” recalls Raja, who was quick to grasp this as an exciting opportunity.

Between them, the two friends collected Rs 10,000 and set out for Tiruppur in Tamil Nadu, a major garment and textile hub. “My mother would sometimes hide some money in kitchen containers, and because I was her favorite she gave it to me.” In Tiruppur, they bought export reject surplus shirts for Rs 50 each. They bundled them in a state road transport bus and came back to Bangalore, setting up ‘shop’ on the footpath outside the Bosch office. “We had seen hawkers outside their gate before and thought it would be a good place to start, more so because it was near our neighborhood,” says Raja. 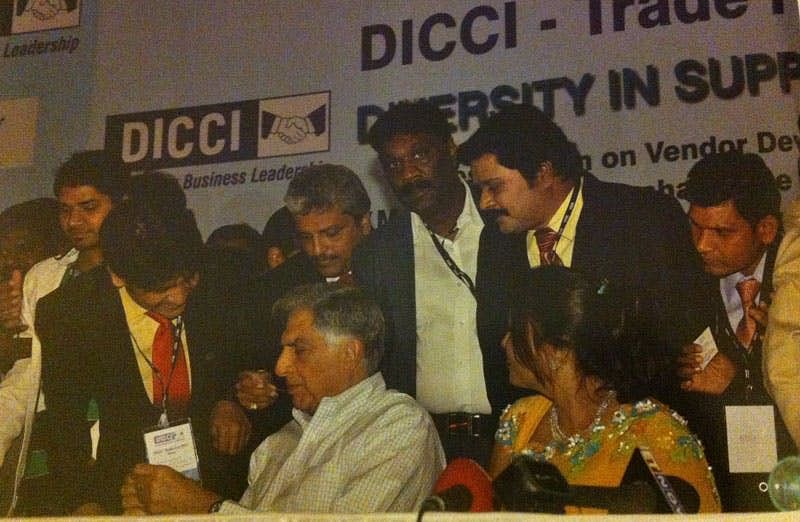 Raja Nayak (standing behind Ratan Tata) at a DICCI event in Mumbai.

It was a perfect plan. Most of the shirts that they had bought were either shades of blue or white. The male employees of Bosch have a blue shirt as their uniform. During the hour-long lunch break, Raja and his friend had sold all the shirts at Rs 100 each, making a tidy profit of Rs 5000. “I had never seen so much money in my life. I was ecstatic,” Raja tells me, reliving that fantastic moment from his past.

Intoxicated by this early success, the two friends reinvested the amount and included more items to sell, going from one place to another to procure them.

“It was like we had wheels on our feet. This was just the beginning. We were not resting till we had made lots of money,”

They would buy cotton hosiery items and inner wear in kilos and set up stalls at large exhibitions employing a few boys to manage them. Whatever was left over, they would hawk them on footpaths. In three years, they had set up a well-oiled business.

The two friends diversified into Kolhapuri chappals and footwear. “Till now, no one had asked me which caste I belonged to. Most often people associate cobblers with the Dalit community, and it was here that I would be asked about my caste,” says Raja, replying to my earlier question if his caste ever came in the way of his business.

According to Raja, “In all our businesses, we never lost any money.” However, his friend had to move out of Bangalore, leaving Raja to continue the business on his own. Around 1991, in the post-liberalization era, Raja started a corrugated packaging business, Akshay Enterprises, with another partner who had the know-how of this market. He says,

“Wherever there was an opportunity, I encashed it.”

Real estate was also booming around this time, and Raja invested in property, making and reinvesting neat sums along the way.

So you see the pattern? He wanted to make money like everyone else, but what separated him from others was that instead of just wishing or whining, he kept his ear to the ground for any opportunity and never shied away from hard work.

“Like many people, I have also faced hurdles, but fortunately, the risks I took in business paid off,” says Raja. It is in his personal associations and interactions that, he says, he was cheated by many people but refuses to elaborate.

"I often say this to people and students when I am invited to address them. Do not take my life as an example. It was all luck.”

But seriously, was it just luck? If so, maybe then fortune favours the brave. Because as Raja believes, taking risks is important if you want your dreams to come true.

“My neighbours and friends who I grew up with are still where they were -- either employed in some company as clerks or as labour. Sometimes they come to me asking for money which I give. But those days, their condition was better than mine. Their father had a job, they went to school. I could not. But today, I share the dais with the VIPs of India. It is not only because of money. It is because of all the hard work and status I have built over the past 35 years,” he says, emphasising how the risks he took paid off.

Raja claims that he never faced discrimination based on his caste. Perhaps, he is being politically correct. But sometimes silence speaks more than words.

Consider this. In the same lane where Raja and his family lived in Bengaluru in a house smaller than his new office where we are meeting (it is the latest Purple Haze outlet which was inaugurated earlier in the morning), Raja went on to build a four-storey building that houses his office on the top floor and his school below.

The school was started because not only was he unable to complete his education, but his sister was also denied admission. “When I had some money, I rented a small house, hired a few teachers and started a nursery school for underprivileged children,” he informs me. Clearly, the soft-spoken, suave entrepreneur I am talking to was an angry young man once.

There’s also this prejudice in society about not eating or drinking water from a low caste person. So Raja decided to venture into the food business. Though the eatery he started has shut down, the bottled drinking water venture, Jala Beverages, is doing well in the market. 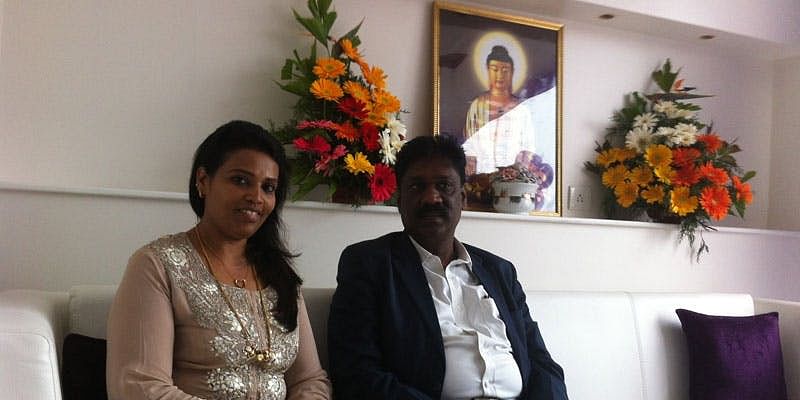 Raja Nayak with his wife Anita.

The other driving force behind Raja’s multiple business ventures was his life partner, his wife Anita. “I kept diversifying because I knew there was someone to look after these businesses,” he says. Anita came to Raja’s school looking for a job when she was around 16. She is also a school dropout from a poor Dalit home. Her father was an autorickshaw driver. Anita started helping around the school and later learned the administrative ropes.

“We actually eloped and got married in a temple. The only witness was one of the school staff,”

reveals Raja, adding, that till today they do not have a formal marriage certificate.

A lot has been written and debated about the suicide of a promising Dalit student in Hyderabad University recently, but stories like Raja’s give hope to the millions who feel oppressed because of a discriminating society like ours.

“I did not climb up using any reservation provisions. Nor have my children studied under any reservation quota (he has three sons). I put them in my school because I believe you do not need a fancy building to learn better. For me, a good school was where good English was taught.”

Raja says that it is not concessions, but connections that he seeks as a Dalit.

“Unfortunately, people from my community are only after government jobs. They do not look at self-employment favourably. At DICCI, we are trying to make them aware of the opportunities available to them. We want to have job creators rather than job seekers,” he says.

Though it took Raja a lot more than three hours to turn his life into a miracle that he witnessed on the silver screen as a teenager, he still has one big dream. “I want to be in the Rs 100-crore club. There are some companies there. Toh unse bhi milenge (I shall rub shoulders with them too).”

Yeah, that’s a great leveler. For as Raja says, when it comes to business only money talks.

This chaiwala from Indore is taking India’s most popular beverage overseas, has opened 180 outlets so far