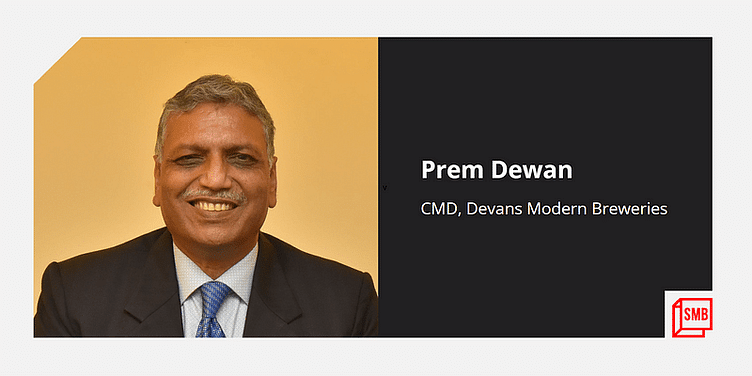 Devans Modern Breweries was started in 1961 by Dewan Gian Chand after he acquired a license to run a distillery. Initially, Devan had to hire specialists to start the production process. Today, the beer brand commands a three percent market share.

According to a report by the Indian Council for Research on International Economic Relations (ICRIER), India is one of the fastest growing alcoholic beverages markets globally with an estimated market size of 52.5 billion dollars (about Rs 3.9 lakh crore). The market is expected to grow at a CAGR (compound annual growth rate) of 6.8 percent till 2023.

The liquor industry is also a major revenue contributor as Indian wines, beer and whiskeys are exported to several parts of the world.

This week SMBStory spoke to Prem Dewan, Managing Director of Devans Modern Breweries. Devans is an Indian company located in Jammu and its founding years can be traced back to the 1940s.

Prem’s father Dewan Gian Chand owned a couple of liquor shops in Jammu. For years, he sold liquor through his shops but in 1961, he acquired a factory license for manufacturing liquor.

“He got the brewery license accidentally from an acquaintance. He had no idea how to make beer so first he hired some specialists to kick start the operations,” Prem says.

In 1967, the company started producing liquor at a capacity of 200 cases a day.

The growth of Devans

Devans is known for its flagship product, Godfather, a beer brand launched in 1984. Godfather is a form of strong lager which comes in different variants including Godfather Legendary and Godfather Super 8.

Prem says that although Devans is still a small company, it has been able to scale up because it has invested in modern technologies to ensure that quality is not compromised.

Over the years, Devans closed its Jammu facility and commissioned a new, more modern version of the brewery in Samba, located on the outskirts of Jammu. The founder also setup a brewery in Kotputli, Rajasthan in 2006.

Today, from making 200 cases a day, the business’ combined capacity has risen to 35,000, which includes both cans and bottles. Apart from selling in India, it also exports more than 40,000 cases annually to Singapore, Hong Kong, the US, Australia and a few other countries.

According to Prem, the state of Jammu and Kashmir has potential in the liquor segment. However, the state has seen several ups and downs.

“In the 1960s, there were hardly 10 shops in Jammu. Historically, if you look at Jammu and Kashmir, they had the best liquor shops in the country,” he says.

However, with the advent of militancy in 1990 and the events that followed took a toll on this segment. Terrorist outfits such as Jammu Kashmir Liberation Front and Hizbul Mujahideen banned liquor on religious grounds. Prem adds that they even banned the cultivation of hops (an ingredient used in making beer) in the valley.

Today, the scenario has changed. Culturally, there is no scare in selling liquor in Jammu. However, Srinagar continues to be the red territory, notes Prem.

He further highlights that Jammu has the lowest demand for beer among all states in India. “We sell only about four lakh or sometimes more cases in the state annually,” he adds.

The pandemic and the road ahead

Beer is consumed widely during the summer months. Perhaps, that is why Prem calls COVID-19 a “catastrophic time” because it wiped off the summer demand completely. The units, he says, were shut down completely in March 2020 and there were hardly any sales in the months that followed.

Clocking almost Rs 300 crore in FY20, the revenues came down to Rs 186 crore in FY21, he claims. However, Prem sees the demand climbing back to pre-COVID levels in FY22. “We expect the demand to explode in the summer season of 2022,” he says.

Going forward, the brand also wants to deepen its presence across the eastern markets. Prem says that the company has tied up with a brewery in Arunachal Pradesh, the product in which is slated to start next month.

“Our aim is to sell 50 lakh cases a year in the coming times,” he signs off.

Age no bar: The entrepreneur couple in their 80s who became an overnight sensation