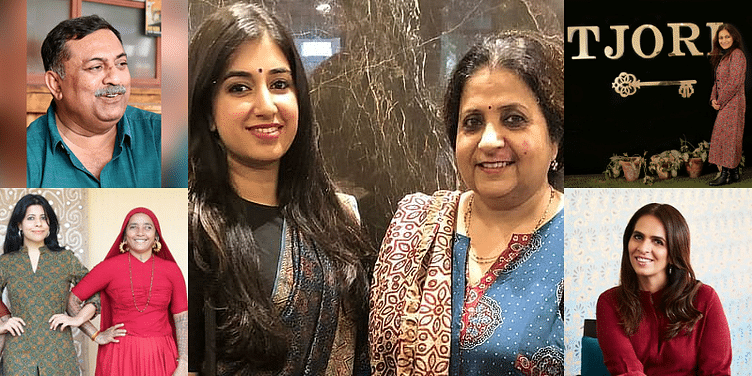 SMBStory has curated a list of five Indian brands that are helping artisans to keep their art alive by empowering them to reach the nooks and crannies of the country.

India has a rich cultural heritage, and that is apparent in its art forms. Each state’s unique culture is reflected in the designs. The shapes, patterns, colours, and fabrics too change from region to region.

The artisans keep the historic artform alive, however, with the boom in industrialisation, craftsmen couldn’t keep up with the growing demand and couldn’t compete with large-scale companies that use machines, resulting in their survival being at risk.

To rescue their profession and bring authentic handmade designs to the people, many large brands like ﻿Fabindia﻿ and ﻿Good Earth﻿ have partnered with artisans to introduce products made through traditional techniques. There are also homegrown small- and medium-scale businesses that are promoting traditional art by collaborating with these skilled artisans.

SMBStory has curated a list of five Indian brands that are bringing the timeless culture of handmade clothing while empowering artisans across India.

Mother-daughter duo Hetal (58) and Lekhinee Desai (29) visited a handloom exhibition in 2016 during a shopping spree. Instead, they came back with an exciting business idea and 50 metres of fabric with the Ajrakh print.

They got the fabric stitched into kurtis in various sizes and designs by their neighbourhood tailor. Lekhinee created a Facebook page, posted a few pictures of the completed outfits, and circulated the link among her friends. Thus began the journey of The Indian Ethnic Co.

Started as a passion project from a family home, ﻿The Indian Ethnic Co﻿ now has three busy offices, ships products worldwide, and contributes to the livelihoods of nearly 1,000 artisans.

Talking to SMBStory, Lekhinee, Co-founder and Marketing Head of the company, says being an ardent handloom lover, her mother did not think highly of the readymade outfits available in the market.

After having purchased the first lot of fabrics from noted Ajrakh artisan Abdul Jabbar Khatri, Hetal connected with him for a business opportunity. She networked with other artisans as well through references. Lekhinee says that they are now members of the WhatsApp group ‘The Craft Channel’, which connects business owners with artisans.

“When we founded The Indian Ethnic Co, we just had one goal – to make Indian fashion responsible, sustainable, and truly handcrafted. What we mean by "truly handcrafted" is that the fabric is handwoven, the dye is handmade with organic and vegetable dyes, the print is hand block, and the final product is hand-tailored,” Lekhinee explains.

Kirti Poonia had been working with the Tata Group since 2007 and she later got selected for the company’s leadership programme – Tata Administrative Services or TAS. As part of the programme, Kirti went to Mithapur, which happened to be the birthplace of Tata Chemicals. The Tata Chemicals Society for Rural Development (TCSRD) had launched the Okhai Centre for Empowerment in 2008 to support rural women artisans.

When Kirti came across the artisan women, she underwent a moment of epiphany. “These women were amazingly talented. I realised that their products were so exotic that the world had to see them,” she explains.

Moreover, Kirti emphasises that the women were immensely proud of their craft, and decided to do something about them. She took on the responsibility of ﻿Okhai﻿ full-time and joined Okhai as its Head. The timing was perfect as the ecommerce wave had recently hit the country, which was fast transitioning into an internet economy.

Kirti launched the Okhai website in 2015. Gradually, the products started getting listed on Tata Cliq, Amazon, Nykaa, and several others platforms.

There has been no looking back since. The company has continued to grow and scale even during the pandemic, although not without unexpected dilemmas and predicaments for the company and the sector at large.

A year after the first lockdown was announced, Okhai claims to be supporting 24,000 artisans from all over the country – all of whom sell through Okhai’s platform. Okhai has an office in Mumbai, but the sales office, design studio, and warehouse are located in Ahmedabad. A total of about 50 people are employed by Okhai on a full-time basis.

Okhai started out as an NGO. Today, it is a standalone business that is not just supporting its own people but also lending support to various organisations operating in similar space. It is not raising funds through charities or donations, rather, it has empowered women themselves to become self-sufficient.

The women in Anita Dongre’s family were mostly restricted to being wives and mothers. None of them worked jobs or started their own ventures.

Her mother, Pushpa Sawlani, used to stitch clothes for Anita and her siblings, and it was this talent that got young Anita interested in fabrics and fashion.

Growing up in Mumbai, she started noticing women who had corporate careers or were entrepreneurs. And while this inspired her, it also made her realise that there was no Indian brand that made affordable workwear for them.

This spelt an opportunity for Anita: she wanted to take her interest in fashion and turn it into a clothing brand for the modern, working woman.

“I started my business in 1995 with just two sewing machines and a loan from my father. My sister and I would work out of a small, 300 square foot area and make western outfits for women,” she tells SMBStory in an exclusive interview.

However, fashion stores and retail outfits rejected her designs, and mall owners refused to give her space to set up a shop. This, however, didn’t deter the headstrong youngster.

“I got so angry that I decided to start my own brand and do it myself,” she says.

This was the beginning of Mumbai-based ‘AND’ Designs, which, in 2015, became the House of Anita Dongre. Today, it is a venture that has a multi-dimensional portfolio with brands such as AND, Global Desi, Anita Dongre Bridal Couture, Anita Dongre Grassroot, and Anita Dongre Pink City.

After enduring years of struggle and hardships, Anita’s brainchild is now a successful fashion house, which currently employs over 2,700 people directly and thousands more indirectly, including artisans in rural villages across India.

Born out of love for traditional handicrafts and apparel, and to cater to the global demand for Indian handcrafted products, Mansi Gupta started Tjori in 2013 in Delhi.

“While I was studying at Wharton School of the University of Pennsylvania, I saw a huge demand for Indian handicrafts abroad. However, I couldn’t find any Indian brand to fulfil that need. There was no Indian brand to drive the Indian audience there. Hence, I thought to start something in this niche,” Mansi recalls.

﻿Tjori﻿ began on a small whiteboard with a huge foresight for the brand – an opportunity that was explored due to the lack of knowledge about the traditional and heritage handicrafts of India on a global platform. The inspiration was Zara, which started from a small boutique in Spain and now has taken over the world of fashion.

“We are on the journey of taking on the biggest brands in the world with what the strength our country offers – playing from the front-foot, as cricketers would say!” Mansi quips.

In an interaction with SMBStory in 2019, Mansi said that artisans and designers from India contribute to Tjori’s collection. The company had created jobs for more than 500 artisans and craftsmen. Today, the company works with around 700 artisans across

While Khitish was looking for a job and doing consulting work for different businesses, he came in contact with an NGO called Professional Assistance for Development Action (PRADAN). Started in 1983 by Deep Joshi and Vijay Mahajan, the non-profit organisation has been working to uplift people in rural areas.

The NGO had also been focused on providing livelihood to the women in Bihar’s textile hub of Bhagalpur. It launched Masuta, a subsidiary that specifically took care of the yarn and fabric production in 2004. This company was owned by all the women who made the yarn. However, while PRADAN was bringing the yarn-making community together, it was struggling to meet its expenses.

That is when Khitish came on board to help the weavers and artisans market their products.

Soon after, he realised that working merely as a consultant was not enough and he would have to dive deeper into the business.

Khitish bought out the company’s fabric division and launched Eco Tasar Silk Private Limited as a separate entity in 2007.

Eco Tasar’s weaving unit in Bhagalpur has impacted the lives of around 1,000 women by providing them with employment. They convert yarn into fabric, which is then brought to Delhi, further stitched and processed in a unit in Manesar, and converted into various apparels like sarees, scarfs, cushion covers etc. The cocoon for making the yarn is sourced from Jharkhand.

Khitish tells SMBStory that ﻿Eco Tasar Silk﻿ clocked Rs 16.5 crore turnover in the last fiscal year. The brand sells about 500-700 sarees a month. The company also has around 100 people on a fixed payroll.