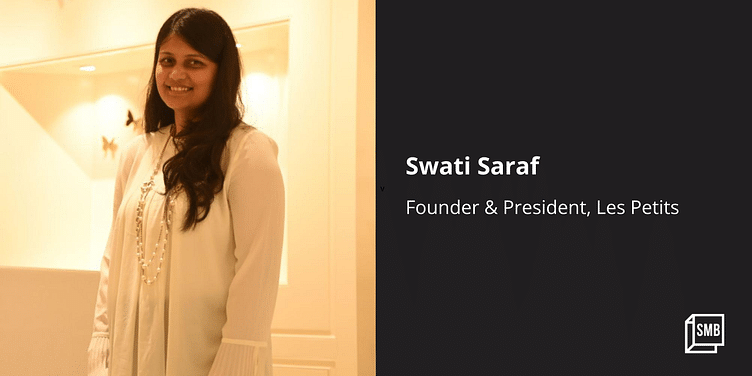 Launched in 2011, Les Petits is tapping the luxury kidswear segment by bringing international labels to India and expanding its private label internationally.

In the early 2000s when foreign brands were making their way to India, Swati Saraf noticed that most of them catered to adults and that there were hardly any children-focused brands.

“The inspiration was my niece, for whom we used to get clothes from abroad. There was no good brand available in India and I realised that many people like us who enjoy shopping for international branded wear would be struggling too. The luxury kidswear market was not even open in India and was a risk, but we went ahead,” says Swati in an interaction with SMBStory.

Swati, after thorough market research, was able to bag distributorship of Fendi in India,  followed by D&G. She opened her first store in DLF Emporio, New Delhi, in 2011. The beginning of her business journey may have been slow, but Swati says Les Petits has grown by leaps and bounds.

Building a luxury brand in an embryonic market

Swati invested Rs 1 crore in setting up her first store. When asked why she took so much risk since the market was at an embryonic stage, she says she knew the demand for premium and luxury clothing for children would rise with increasing disposable income.

According to Growing market for branded kidswear in India, a report by the Associated Chambers of Commerce and Industry of India, the kidswear market in India is progressing at a compound annual growth rate (CAGR) of 20%. This makes India one of the fastest developing markets for the segment.

According to Statista, the revenue in the luxury fashion segment in India amounted to $1.49 billion in 2022, with the market expected to grow annually by 1.67% (CAGR 2022-2027). This luxury is also permeating into kidswear.

While there was zero penetration of social media for businesses to reach customers and ecommerce was yet to open up 20 years ago, Swati used to advertise through hoardings and events to create brand awareness. She invited Sussanne Khan to her first store launch, creating a lot of buzz.

The market picked up after 2017 and the brand is witnessing 10% growth year on year since the last five years. However, she refused to divulge numbers.

“Selling online was an option after a few years of inception but we wanted to first expand to a few more cities. In 2016, after we opened our second store in Mumbai and also started online sales through our own website. Business picked up then,” Swati says.

In 2017, the company forayed into private labelling, introducing brands Rang and Stella Rossa for kids’ ethnic and party wear collection.

Before the COVID-19 lockdown, Swati opened a third store, Les Petit Legers, DLF Avenue, New Delhi. “With Les Petits Legers we are catering to the premium and not a luxury segment of the customer. This is a diversification to our business,” she says.

Why luxury wear for kids?

Luxury kidswear is a niche market. The price range for international brands in Les Petits online and offline stores starts from Rs 900 and goes up to Rs 70,000.

When asked about consumer behaviour toward these expensive products in the Indian market, Swati says consumers with buying potential and who swear by labels are their target audience.

“Apart from the trust in big brands, psychology and peer pressure matters a lot. This is no longer a time when kids will wear what their parents buy; they have an opinion too.”

The real challenge for Swati began when she started advertising her brand on social media.

“People come up to me and ask, ‘Why are these kids clothes so expensive? Are they for real?’ I have to keep explaining that these are original international labels. Winning the trust of customers is a real struggle in the virtual world,” Swati says.

Swati also lists another challenge: inventory management, the “downside of any apparel business”.

Talking about the future, Swati says that the aim is to expand both online and offline. Les Petits plans to open up three to four more stores in the next three years.