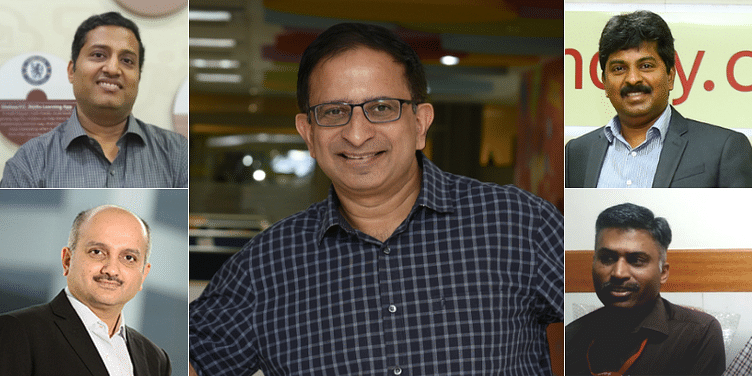 IITs and IIMs are often synonymous with entrepreneurial success, especially when it comes to building a tech enterprise.

Over the last eight or nine years, tech startup founders like Vijay Shekhar Sharma (Paytm), Byju Raveendran (BYJU's), Ashish Shah (Pepperfry) and Girish Mathrubootham (Freshworks) have proved that entrepreneurial success is not dependent on being part of the elite IIT-IIM club.

But beyond the gleam of the more recent tech startups, there are several non-IIT and non-IIM entrepreneurs who have achieved success over a longer span of time.

SMBStory has curated a list of successful tech entrepreneurs who have proved over the years that one doesn't need an IIT or IIM degree to create and run a profitable business:

With just Rs 10,000 in his pocket, Shanbhag, who hailed from a small village, wanted his company to play in the big leagues. But he knew that it wouldn’t be a sprint, but a marathon.

Being a first generation entrepreneur in Bengaluru, the knowledge of the life cycle of a company and the development of the IT hub certainly helped him.

Further, by identifying long-term goals and working backwards from there, he led the bootstrapped company to Rs 600 crore turnover and also survived three recessions.

When he was young, Abhishek Rungta earned pocket money by installing internet connections in people’s homes and training them to use browsers and emails. His love for computers led him to start IT enterprise Indus Net Technologies in Kolkata in 1997, but there's a hitch. He was still young and did not have an engineering degree.

“I had done my BCom from St Xavier's College in Kolkata and though I had taught myself coding, I still felt I needed a formal degree in allied tech subjects," he says.

He went to the University of Bath in the UK in 1999 to do an MSc in Multimedia. Then, Abhishek was able to bring in new technologies like Java, mobile applications, TopNet, and others. Abhishek’s diversification was large and most of his clients were SMEs.

Over the next two decades, he created a thriving tech ecosystem in a city that was just waking up to the digital revolution.

Started in 1997, India's first matrimonial site Bharatmatrimony was born out of founder Murugavel Janakirman's experience running a Tamil community in the US.

The computer applications graduate from University of Madras offered free services like sharing the Tamil calendar, festivals, travel to India, and help with flight bookings on the community.

Among these services was also a matchmaking service. Over time, he saw more traction on the matrimonial platform and decided to turn it into a paid service. One of the most successful matching stories happened in 1999, when he himself got married through his own portal.

Today, Bharatmatrimony is a listed company and had recorded an estimated revenue of Rs 350 crore in 2018.

With the advent of the internet and digital mediums in the last decade, physical directories were phased out and businesses and service providers were being listed online.

Chennai-based NIT graduate Satya Prabhakar had anticipated this and made his move well in advance. In 2007, he had started Sulekha, a digital platform for local services.

"I ran an online listing service prior to 2015, which was like an online Yellow Pages. This served a utilitarian purpose of connecting consumers with a range of local businesses in more than 100 cities across India and the USA," he explains.

Sulekha pivoted in 2015 to become a pure-play digital platform for local services where consumers (with service needs) and service providers find each other.

Nalin Tayal from Ludhiana, Punjab, completed his mechanical engineering from Guru Nanank Dev College and worked as a financial consultant for five years.

But he wanted to start his own business, so he started his own financial consultancy firm, GATS India Ltd, in 1999. "I knew that the future could be uncertain. I started with nothing. I cannot forget the day when I asked my wife for Rs 100 to fill petrol in my scooter.”

Realising that fintech is the new norm, Nalin ventured into the cashless payment ecosystem. His company's digital wallet, GATS Pay, supports B2B payments. At present, it has a user base of 42,000 and performs around 5.7 lakh transactions a day.

The company has reported a turnover of Rs 400 crore and has expanded to offer services like banking, forex, tours and travels, and digital payments.