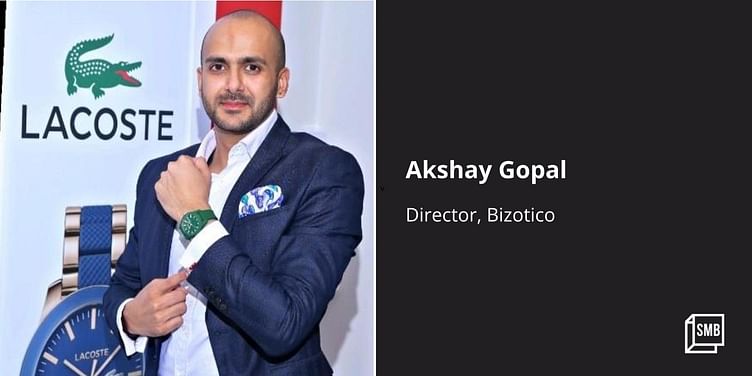 Bizotico began its journey in 2015 as a distributor of Ferrari watches. Today, the company boasts of having distributorship of 28 brands. It has also launched its online shop Zotick.

India is emerging as a major market for international brands. The country is the world’s fifth biggest economy offering great resources and high investment opportunities.

Akshay Gopal, the founder of ﻿Bizotico﻿, says every other international brand is focussing on India, especially after the pandemic as the industry is seeing a rebound after staggering losses. Bizotico is a distributor of international fashion and luxury watch and accessory brands in India.

The Bengaluru-based company is an exclusive distributor for the Movado Group; it markets and distributes top international watches and jewellery brands from the group’s portfolio, including Movado, Ebel, MVMT, Hugo Boss, Lacoste and Calvin Klein in the country.

Talking to SMBStory, Akshay says that international brands, irrespective of categories, are interested in India. A rise in the purchasing power of consumers has increased the demand for premium watches in the country.

Before starting Bizotico in 2015, Akshay was engaged in the distribution of premium eyewear brands. A stint with Ferrari for distribution of its sunglasses led to talks of handling the iconic brand’s watch distribution in India. Today, the company is Ferrari’s largest distributor for watches.

“I knew nothing about the watches business but the idea was really fascinating and without thinking twice, I dived into this world,” says Akshay.

The initial period was challenging. Stakeholders in the premium watch segment didn’t trust him as he was a young, first-time entrepreneur who had entered the distribution business, which is typically carried on generation after generation. But, as time passed, his strong will led him to close deals with prominent names such as Ferrari, Fendi and Lee Cooper.

When COVID-19 disrupted many businesses, especially the ones that were operating in the non-essential category, Bizotico was also impacted. Akshay says that, at one point, the business had zero revenue. However, he utilised most of the lockdown period in studying the market and proposing deals to various companies that were not present in India.

“The market dynamics were risky and unsure. No one knew how it would turn out but we saw that, after a certain period of time, people were coming back to shopping, and in an even better way,” he says.

His dedication to the business bore fruit. Bizotico grew from having exclusive distribution rights of nine brands in 2020 to 28 brands now. At least 11 brands have entered the Indian market through Bizotico, including Earnshaw, Strand, Aries Gold, Duxot and Jacques.

The pandemic also nudged Akshay to open an online shop, Zotick, which sells premium brands, competing with the likes of Collective and Ethos. Zotick’s USP is the price range that it offers. Watches on the platform cost Rs 5,000 to Rs 1,00,000.

“We are eying 50% to 100% growth every year and launching more categories. Our next foray would be in jewellery,” he says.

Zotick has two kiosks, one each in Mall of India, Noida and Pacific Mall in Dehradun. Akshay says, in the next two years, he will strengthen the offline presence as well.