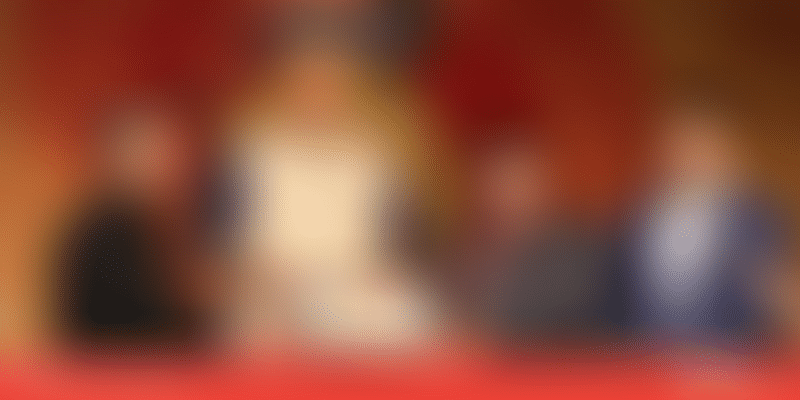 Springfit has its mattresses manufacturing units in Haridwar, Meerut, and Coimbatore. Its fourth unit is soon to open in Indore. It has more than 80 distribution channels and around 1500 active dealers across the country.

One thing which we all look upon at the end of the day is hitting the bed. A real comfort is when you get a sound sleep in a comfy mattress.

Here is the story of Yourstory’s Brands of India 2019 winner Mukesh Gupta from Springfit mattress, who dedicated his entrepreneurial journey in manufacturing and innovating mattresses.

Being a stalwart in the sleeping aid industry for 40 years, Mukesh Gupta founded Springfit mattresses in 2009 in Haridwar, to innovate the traditional mattresses design. The company was co-founded by his sons Nipun Gupta and Nitin Gupta.

In an interview with SMBStory, Nipun Gupta shares how they overcome the preconceived notions of the people to dominate the Indian sleep industry.

Back then, when they started, spring mattress was a luxury thing. The hospitality segment and retailers used to import the mattresses’ materials from foreign countries and assemble them in India for sale and use in hotels.

“We are one of the first Indian companies to manufacture spring mattresses and started by investing in machinery (which we imported from Germany) and technology. We purchase spring wire from outside, and all other materials, including foam, coir, and other comforting layers, are manufactured in our own factory,” he adds.

The beginning of Springfit

Springfit was founded to launch spring mattresses. However, Nipun says that it was not easy to enter into the market as there were already big players from countries like the US controlling the Indian retail and hospitality segment. “It was a struggle to introduce spring mattresses due to preconceived notions of people that they are not fit for our body. We tried to educate people as much as we could, but things didn’t work as we expected,” he adds.

People feel that spring mattresses are not fit for the body, however, if given proper support with different comforting layers, there are no issues associated with it, he explains. Later, after research and development, they introduced the unique design of mattresses apart from spring mattresses, which he says, are one-of-their-kind.

In the initial days, it was hard for Springfit to generate an annual turnover of Rs one crore which now, in a span of almost 10 years, records up to Rs 150 crore.

Springfit mattresses range from latex, memory foam, rebounded foam to orthopaedic. The company also manufactures pillows, bed linen, bed cases, and mattress toppers. It has its manufacturing units in Haridwar, Meerut, and Coimbatore. Its fourth unit is soon to open in Indore.

Springfit currently exports its mattresses to Japan and the Middle East. The company which was once challenged by foreign players now dominates the Indian sleep aid market.

At present, 30 percent of the products manufactured in its Coimbatore unit are being exported to Muji retail in Japan, whereas, around 50 percent of its products are supplied to various hotel groups, including the Taj Hotel, Marriot, Crown Plaza, and many more.

The company has more than 80 distribution channels and around 1500 active dealers across the country. Springfit also has its own website (www.springfit.com) where it receives orders from people all over India. Besides, it is also listed on many ecommerce platforms like Amazon, Flipkart, and Pepperfry.

The impact of international players

Entering into the market and diversifying into so many categories did not happen in a jiffy, says Nipun. Sleep aid industry is a slow industry with a lot of challenges.

“The biggest challenge which we were facing a decade ago still remains the same, that is, people’s inclination towards international brands,” he shares, explaining that people prefer international brands despite the Indian brands offering similar or better products.

Innovation is the key to run a successful business. Nipun talks about how he managed to sustain the growth of his business and says that designer mattresses were not so common in the past years. Hence, they introduced mattresses in various designs along with a blend of comforting layers which are now in huge demand. Springfit has its USP in offering designer mattresses to customers.

Existing Indian brands manufacture regular mattresses with the same inner construction and similar outer look. However, Springfit uses different materials and the look and feel of its mattresses are unique. We use HR foam other than the regular upholstery foam that makes our mattresses breathable."

Springfit also received recognition from Taj Hotels and recently did some media campaigns with Bollywood actors Neha Dhupia and Soha Ali Khan, while Sophie Choudhry was roped in to launch their new product range.

In the near future, Springfit aims to target the foreign market by increasing its exports. Nipun says that with Springfit’s fourth unit coming up, they will aggressively hit the central India market. “In the sleep industry, an overnight sale is not possible, all those who want to enter into this market must remember that it takes years to build a brand,” he adds.

ALSO READ: Are you a fitness freak? Read how HealthXP is adding to India’s gym craze by selling supplements online