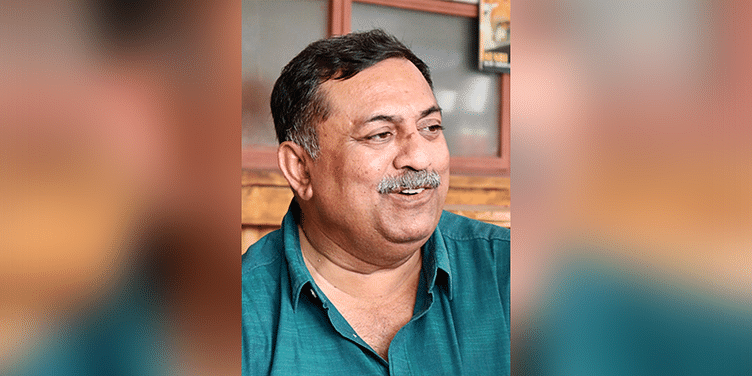 Eco Tasar Silk Pvt Ltd was launched in 2007 by Khitish Pandya. The company manufactures sarees, stoles, and cushion covers made from Tasar silk. It claims to have impacted the lives of 1,000 women in Bihar’s textile belt – Bhagalpur.

Khitish Pandya’s tryst with the manufacturing sector is over two decades long. After completing his MBA from Xavier Institute of Management, Bhubaneswar, he opened a unit in Delhi to manufacture portable houses and mobile toilet vans. In 1998, he met with an accident which brought some unexpected challenges and “everything went downhill.” The unit had to be closed down in 1999.

While Khitish was looking for a job and doing consulting work for different businesses, he came in contact with an NGO called Professional Assistance for Development Action (PRADAN). Started in 1983 by Deep Joshi and Vijay Mahajan, the non-profit organisation has been working to uplift people in rural areas.

The NGO had also been focused on providing livelihood to the women in Bihar’s textile hub of Bhagalpur. It launched Masuta, a subsidiary which specifically took care of the yarn and fabric production in 2004. This company was owned by all the women who made the yarn. However, while PRADAN was bringing the yarn-making community together, it was struggling to meet its expenses.

That is when Khitish came on board to help the weavers and artisans market their products.

Soon after, he realised that working merely as a consultant was not enough and he would have to dive deeper into the business.

Khitish brought out the company’s fabric division and launched Eco Tasar Silk Private Limited as a separate entity in 2007.

Eco Tasar’s weaving unit in Bhagalpur has impacted the lives of around 1,000 women by providing them with employment. They convert yarn into fabric, which is then brought to Delhi, further stitched and processed in a unit in Manesar, and converted into various apparels like sarees, scarfs, cushion covers etc. The cocoon for making the yarn is sourced from Jharkhand.

The sarees made of Tasar silk – also known as Kosa silk – are the main products of the company, and are priced between Rs 6,500 to Rs 9,000.

Khitish tells SMBStory that Eco Tasar clocked Rs 16.5 crore turnover in the last fiscal year. The brand sells about 500-700 sarees a month. The company also has around 100 people on a fixed payroll.

Making a mark in a niche market

Khitish says that the company endeavours to “use hands for spinning yarn” instead of machines to generate employment for as many people as possible.

Talking about the business model, he says, “While launching Eco Tasar, I was very clear that I and my team will remain true to the social spirit of PRADAN, but will not run it like an NGO.”

He says that the production and supply chain processes involve extensive manual labour, and this is their way of generating employment in the B2B model.

He also says that even though handlooms are obsolete, he continues to use them instead of power looms (which are mechanised looms). “I'll probably provide employment to 10 people instead of one person this way,” he adds.

Everything at Eco Tasar is hand-made, says Khitish, adding, “When it comes to embroidery, we prefer to do it by hand. The same is applicable for block printing instead of digital printing.” He says that though machines have replaced human labour across industries, that will not be the case with Eco Tasar.

Creating an impact with customisation

According to Fibre2Fashion analysis, the real value of the women's wear market in India was estimated to be around $19.2 billion in 2017, with the saree segment contributing about 33 percent.

Some of Eco Tasar’s competitors include ﻿Fabindia﻿, ﻿karagiri﻿, and Olive and Grapes Layers among others.

Eco Tasar has been largely selling through multi-brand outlets. At the moment, the company supplies sarees to 350 stores and shops across the country. It is not present on any ecommerce platform. Khitish also says that he is “very much aware of how crowded this market is.”

He says, “We are not like big brands that have large volumes to offer. So our strategy was to make and sell a large variety of designs. For this, we started tapping the mom-and-pop sari stores.”

Khitish says that small business owners want to have a collection of 10 different designs because this is what the customers want. The strategy of Eco Tasar also embodies that idea by producing small quantities of sarees. However, it has a large variety and customises the design according to consumer needs. He also says that the company introduces at least 150 new designs every year.

He also adds that the business is not planning to open its own store as it would like to concentrate the funds and capital on employment generation.

COVID-19 and other challenges

This pandemic saw several trends emerging in the business ecosystem. One of them was brands adopting the D2C model (the direct-to-consumer business model).

Khitish says that over the years, the company has made contacts with customers through sales, exhibitions, and other networking platforms. He used the disruption caused by the pandemic to send catalogues to individuals, many of whom showed interest and started buying from them. The company will soon launch its website, Eco Saree Club, to directly serve the customers.

During this period, the company also started making cushion covers from Tasar silk. Though they are available, the cushion covers are largely made on individual orders. He also adds that the pandemic, which brought the entire world to a standstill, brought some challenges for the founder and the team as well.

“Our orders were reduced but we had something in our kitty. This helped us manage our expenses and not retrench anyone,” he says.

The journey for Eco Tasar has been a challenging one. Khitish says that one of the biggest obstacles has been to create a sustainable commercial enterprise without compromising on the spirit. He says that building a great team by grooming them has helped the company ride over the various hurdles. Also, reiterating the spirit to oneself and not getting swayed are also important.

The business has largely been bootstrapped and has been growing steadily. The company raised Rs 3 crore from Amsterdam-based Capital 4 Development Partners in 2016.

When asked if the company plans to onboard any investor or pump external funding to scale faster and higher, Khitish says he is “tempted to do so every day.” He says that they would like to continue to infuse internal funds within the company to keep the spirit of PRADAN alive.

Value over valuation: How bootstrapped Royal Oak made it big in the furniture industry

Started from a village, grew into a Rs 6,000 Cr turnover business: the Made in India story of GR Infra