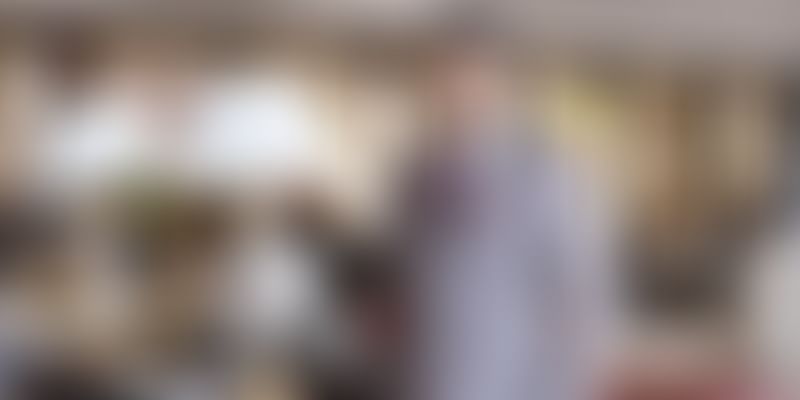 When Anuj Mundra saw a hoarding of Snapdeal and Jabong in Delhi in 2012, he knew that the future of shopping in India was online. Thereafter, he launched an apparel business, Jaipurkurti.com, which did a turnover of Rs 59 lakh in its first year.

Between 2001 and 2003, Anuj Mundra was working in a saree showroom in Jaipur, earning Rs 1,400 every month. He soon realised that he couldn’t sustain himself with the income for too long. In 2003, he quit his job and started a business of trading suit pieces.

He would purchase suit sets from vendors and further sell them to other vendors and shopkeepers. When he started earning some income, Anuj opened his own block and screen printing units in Jaipur itself.

This went on till 2012 when Anuj came to Delhi and saw huge hoardings of ecommerce marketplaces Jabong and ﻿Snapdeal﻿. He felt a moment of epiphany and realised that ecommerce is going to be the future of shopping in India.

He came back to Jaipur and spoke to a Chartered Accountant (CA), enquiring about company regulations and compliances. He launched Nandani Creation Pvt. Ltd. in 2012 and branded the ecommerce offshoot as Jaipurkurti.com. In the first year itself, the company clocked a turnover of Rs 59 lakh.

Toiling the way up

Anuj started the business with very limited resources. He amassed Rs 50,000 from close friends and later, even took out a loan from a bank to seed his business. With the funds, he bought 10 sewing machines for stitching kurtis and suits. Anuj’s wife, Vandana Mundra, would design kurtis, which were then dyed, printed, stitched, sampled etc in its manufacturing unit in Kartarpur Industrial Area, Jaipur. He got listed on Snapdeal and Jabong and started selling in-house manufactured items on these platforms.

Anuj says that in the initial years, although there was less competition, the struggle to run an ecommerce company was immense.

“In 2012, the concept of online shopping was known to the world but it was new in India. Hence, Indians were hesitant to buy online,” he tells SMBStory.

He further adds that from logistics and barcoding to preparing shipping details, everything was a challenge. In addition, the return rate was also quite high since people did not know how to buy the right size according to the cutting and fitting of the kurtis.

A few factors (both internal and external) helped the company navigate through the challenges. Anuj says that bigger ethnic brands and other major outlets such as Adidas, ﻿Biba Apparels﻿, Wills etc listing themselves online helped convince people.

In addition, he says they started putting out pamphlets in delivery packages that explained what the brand was and also included the customer care number along with some discount coupons.

Today, the company manufactures and sells suits, kurtis, fusion wear, bottomwear and a host of other apparel items. The B2C company even exports to countries such as the UK, the US, Australia, Malaysia, and a few others. The average selling price for suits is Rs 900 and for kurtis, it is Rs 650.

How this aviation junkie turned an experiment into a full-fledged business; bagged a deal with Tom Cruise starrer-Top Gun

Anuj says that he was investing in the business whatever he was earning. But soon, he realised that in order to grow, the company needed more funds.

Jaipurkurti.com got listed on the National Stock Exchange (NSE) Emerge, a platform under NSE for startups and mid-sized companies to get listed on, in 2016 – just four years after its inception.

In October 2016, Nandani Creation announced its Initial Public Offering (IPO). A total of 14,44,000 equity shares were subscribed for Rs 4,04,32,000. Anuj says that the decision to go public so early stemmed from the decision that he didn’t want to dilute the founder's control by onboarding a venture capitalist investor.

The company, however, is planning to get listed on the main board of NSE in the coming times.

From D2C to going offline

Anuj says that initially, he did not pay much heed to the website because it required a lot of investment in promotion and marketing activities. The brand was gaining orders largely from marketplaces such as Jabong, Snapdeal and later on, Myntra, ﻿Flipkart﻿, ﻿Tata Cliq﻿, and a few others.

“Initially, we were selling 99.9 percent of the items on other portals. Gradually, the traffic started getting directed to our website without us even trying,” he says.

He adds that over the years, the consumers have become more aware and intelligent. The numbers have also improved as the return rate dipped from 50 percent to almost 35 percent.

In 2019, the brand opened its first store, Amaiva, in Jaipur. The store didn’t get much attraction and didn’t resonate with the customers. In January 2020, the company rebranded the stores as Jaipurkurti.com, which got a much better response. Since then, the business opened two more stores in Jaipur itself.

The Indian apparel market may not have been so crowded when Anuj started. However, today, it is more crowded than ever. Apart from well-known brands like Biba, Shree, Fab India, and Global Desi, several other Jaipur-based brands have become quite popular such as Gulabo Jaipur, Zari Jaipur etc.

Anuj says they are “very much in the game” but they cannot afford to take a backseat and let their competitors get ahead.

Made in India for the world: This manufacturing company caters to global audience; clocks Rs 110 Cr turnover

COVID-19 and the way forward

Anuj says that being an online brand has helped it navigate through issues such as demonetisation, as well as most recently, the coronavirus pandemic. He says that COVID-19 was a blessing in disguise as retail was closed and there was an increase in online sales.

The company clocked sales worth Rs 7.12 crore in June 2019 whereas, in June 2020, it clocked Rs 7.37 crore despite the lockdown and the restrictions. Additionally, in the last financial year, the business clocked a turnover of Rs 43.7 crore and moving forward, the company wants to become a Rs 100 crore business by 2023.

For the same, he plans to establish stores in Rajasthan and Delhi, and even in Tier II, III and IV cities such as Lucknow, Indore, Jodhpur, Ludhiana etc. He says the demand from Tier III cities is very high.

The company also plans to establish 15-20 stores by 2023. He says that apart from expansion, the only way to achieve the Rs 100-crore target is by providing customers with a vast variety to choose from.