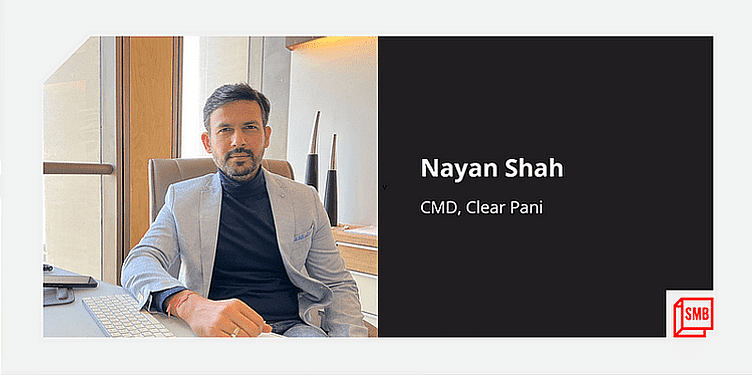 Ahmedabad-based packaged drinking water brand, Clear Pani, was founded in 2010 by Nayan Shah. The company has been able to chart an impressive growth journey over the years, onboarding clients such as The Grand Bhagwat, Marriott, Holiday Inn and more.

According to a report by MarketsandResearch, increasing health concerns, and unavailability of clean drinking water have led to the growth of the bottled water market in India.

Clear Pani, which started in 2010 by manufacturing just 5000 bottles a day, makes 25 lakh bottles a day and is eyeing to become a Rs 1000 crore company by 2025. Nayan, in the interview, sheds light on the beginning, early years and the impressive growth journey of the company.

After completing his MBA from University of Technology, Sydney, Nayan returned to India in 2002. The trajectory of Nayan’s life was almost set. He had a family business of manufacturing wires and cables in Ahmedabad.

However, Nayan wanted to explore other avenues. He worked briefly with Line O Matic Graphic Industries and left two years later, when he felt that he wanted to seriously consider entrepreneurship.

“Around the same time, I visited Singapore and saw what a rage the Red Bull drink was. The same held true for India as well. Moreover, Red Bull barely had any competition in the Indian market.”

Apart from PepsiCo, Coca Cola, and other beverages, Nayan felt that there was hardly any competition in the energy drinks market.

Nayan decided to quit his job and start an energy drinks business in 2005. Along with his former boss, he founded Energy Beverages Private Limited with an initial investment of Rs 2 crore.

They rolled out the first product, Current Energy Drink, the formulation of which was done in Germany and manufacturing in Malaysia. The business was able to set the cash registers ringing till about 2007.

“We were doing an annual business of Rs 3.20 crore,” Nayan adds.

Post 2007, the sales of the company started declining. The product had created a rage in the market but a product priced at Rs 75 couldn’t keep up.

“It was a lifestyle product and people don’t buy it regularly.” Nayan also adds that they were competing with tea or coffee which cost much less, a fact which was earlier ignored.

When the annual revenues came to Rs 60 lakh by 2009, Nayan knew it was time to look for the next big opportunity. Nayan’s partner exited the company.

His next business idea was to sell water. “I observed that water is something that is already in our ecosystem and it is easiest to sell because it has a lot of demand.”

This led to launching Clear Pani in February 2010, under Energy Beverages Private Limited, to manufacture and sell packaged drinking water. Initially, the company outsourced the manufacturing to units located in Mumbai, Pune and Jaipur.

Talking about the initial years, he says, “Even though the energy drinks business failed to make a mark, it gave me an unparalleled insight into operations and training of running an FMCG business. I understood the way the market works, the margins, retail trade, modern trade and more.”

Nayan’s strategy was to go from “top to bottom” in order to succeed. He decided to rope in one of the most well-known hotel chains of Gujarat, The Grand Bhagwat, to supply 200ml bottles of Clear Pani. The team also worked closely on the products’ packaging and design. Instead of the more conventional cylindrical bottles, the company made square ones.

In those days, Bisleri, Kinley, Kingfisher, Aquafina, Bailley and more were the reigning brands in the market. However, Nayan wanted Clear Pani to stand out in this space. “In those days, most of our competitors had plastic sleeves wrapped around their bottles. We decided to make labels which were stuck on the plastic bottles,” he says.

“We started with bagging a contract with Jet Airways. Airlines are very particular about quality and services. So once we started supplying to them, people started looking at us as a quality-driven brand,” he adds.

Today, Clear Pani’s combined capacity is 25 lakh bottled per day in 22 (including own and outsourced) plants across India for its production. The 200ml, 500ml and 1000ml bottles cost Rs 6, Rs 10 and Rs 25 respectively.

Before the COVID-19 pandemic, Clear Pani’s 90 percent of the revenues came from the HoReCa segment, meaning the company had to endure a huge hit. Nayan says that “business had come down to almost zero” but COVID-19 “was an eye-opener for us.”

“I was zapped for three months (March, April and May 2020) and didn’t know what to do,” he recalls, “However, I am well-connected in the industry and spoke to some executives from our competitors. Surprisingly, their businesses were only affected by 20-25 percent.”

Realising his mistake, Nayan decided to venture into the retail trade deeper during the pandemic. It has on boarded 11,160 retail outlets in the last one and a half years which helped in recovering.

Clear Pani is also present on ecommerce platforms such as Amazon, selling more than 400 cases monthly. However, offline is its major focus.

Today, Clear Pani is on its road to recovery and Nayan claims that they are in the race to cross Rs 100 crore in revenue by the end of this fiscal year. They also plan to scale up to 50 units across the country in the next 12-18 months.

Additionally, the larger goal is to become a Rs 1000 crore company by FY25-FY26, he concludes.