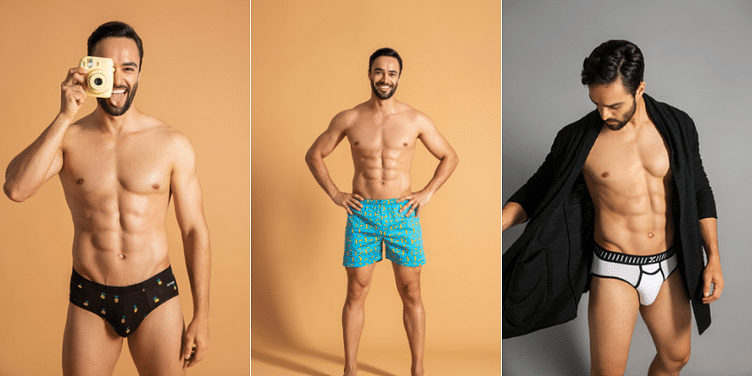 XYXX designs and manufactures innerwear for men ranging from trunks, boxers, briefs, knitted pajamas, vests, and t-shirts and the brand has an annual turnover of Rs 12 crore.

To all the men out there looking for everyday comfort and unconventional variety in their innerwear, only to find boring and expensive options, XYXX has launched its men’s innerwear brand which includes a wide range of stylish products at the price point between Rs 199-Rs 399.

Founded by Yogesh Kabra in Surat, Gujarat, in 2017, XYXX is a premium men’s innerwear and loungewear brand. The company was founded with a vision to change the innerwear culture in India. Yogesh Kabra says,

Innerwear is the first garment a person wears every day and there weren’t enough choices in the market. If my outfits are designed to reflect my mood for the day, why can’t my innerwear do the same - they don’t have to be black or white.”

After completing his post-graduation from the US, Yogesh came back to India and joined his family textile business. The business sources fabric from across India for the domestic market mainly for women’s ethnic, men’s shirt, and home decor.

Yogesh says that after returning from the US, one day he went shopping for innerwear but did not find any good collection. The fabric quality for all the brands was common, and there was nothing which could fit in his choices. He realised that in India, it is hard for men to make a ‘happy choice’ for their innerwear. Thus, the idea struck his mind, and he decided to start his own venture of men’s innerwear. He says,

The men’s innerwear industry in India has not seen any innovation in the past many years. We aren’t just talking about bad products but also bad habits around the product itself. XYXX wants to change the innerwear culture in India.”

The company was founded with a capital of Rs 50 lakhs and is bootstrapped. Currently, XYXX employs 40 people in its office in Surat.

As innerwear is driven by quality and comfort, XYXX uses LenzingMicroModal fabric for innerwear. It is the premium underwear fabric across the world which is extracted out of the pulp of beech wood tree in Austria.

Yogesh says, “MicroModal is three times softer than cotton, is feather-light, cooler to touch, and up to 50 percent more moisture absorbent than cotton, making it the perfect fabric for India’s weather.” He further explains that MicroModal is also biodegradable and natural. This means any clothing made with MicroModal will return to the earth in one’s lifetime. The waistbands in XYXX innerwear are made using microfiber yarns, which is very gentle on the skin and leaves no rashes.

"Not many national players are using micromodal fabric in its entire range but XYXX is doing it in a big way," he adds.

Entering into the market

After its launch, XYXX listed itself on Amazon for its sales. Though there were huge brands dominating the Indian innerwear industry, XYXX, with its USP, started generating sales from the beginning thus increasing it to 50 percent every month. Yogesh says,

If designed well, consumers are ready to try out a new product. We are confident that we have a better product at a good price, and our sales show that.”

XYXX has its distribution channels in Maharashtra, Madhya Pradesh, Gujarat, and Chhattisgarh. The brand has till now attracted 3,00,000 customers generating a turnover of Rs 12 crore annually and expects to double in the coming months.

On asking, why the name XYXX? Yogesh says,

“An individual is identified by a pair of its chromosomes which is 99 percent similar. It’s only one percent that differentiates people from one another and we at XYXX are trying to create that difference by offering a channel of self-expression through innerwear.”

Recently, XYXX announced its first round of seed funding of 20 million from Sauce.vc., and Govind Shrikhande, ex-MD of Shoppers Stop has joined the brand as a Senior Advisor.

The major challenge, according to Yogesh, is the customer’s psyche. Even if the innerwear is really old, men try to hang on to it. The shelf life of the innerwear is limited to 25 washes but Indian consumers drag it to 70-80 washes on an average, even after the fabric loses its soaking power and basic characteristic feature.

In the time to come, the brand wants to seize maximum possible location to be available at major consumer buying points, Yogesh says. He also wants to maximise the brand’s reach in digital as well as the offline medium.

Yogesh also mentions that with the first round of seed funding received recently, the brand is looking forward to strengthening its team and expand its reach to increase sales pan India.

According to a market analysis by Technopak, the market size of the innerwear industry is estimated to grow at a CAGR of 10 percent over the next decade to become Rs 74,258 crore by 2027. And, with dominant national brands like Dollar, Lux, VIP and many more, it is still to see how XYXX will scale up in the Indian market in the near future.

With TallyPrime, Tally Solutions aims to help SMEs automate their business amidst the pandemic