How this aviation junkie turned an experiment into a full-fledged business; bagged a deal with Tom Cruise starrer-Top Gun 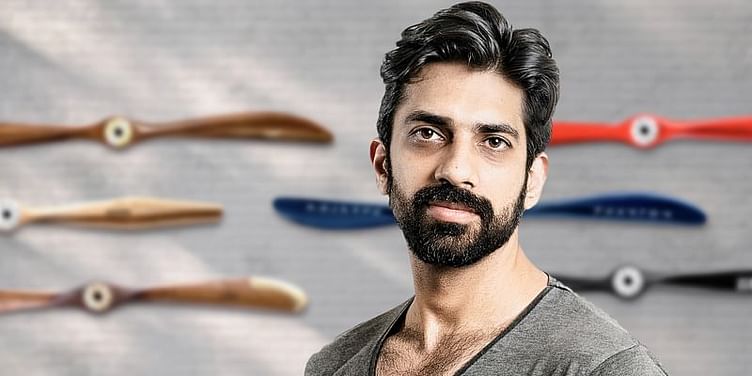 Mumbai-based WoodFeather was launched in 2017 by Akshay Sharma. Today, it makes wooden propellers, spearheading the aviation decor space - a category unheard of in India, and untapped in the rest of the world.

Akshay Sharma always wanted to be a pilot. He was all set to fulfill his dream and apply to a flying school in Florida in the early 90s. However, when he got his medical test done and the reports came, he realised that his eyesight number was just on the borderline. A fluctuating eyesight which can change at any given point in time made it extremely risky for him to apply. His world came crashing down,  but life had other plans for him...

Akshay grappled with his new reality. As someone who never had a plan B, he dabbled in hotel management, radio jockeying and marketing. He joined MTV’s channel marketing vertical in 2000, and life continued like this till 2010 when Akshay decided to get back to flying. He acquired his license from the Dean International Flight School, Miami and became a licensed pilot.

Akshay became a recreational pilot but as an aviation junkie, he had a deeper quest. In 2015, while doing the interiors of his new home in Mumbai, Akshay wanted to install propellers, an important component attached to aeroplanes.

He could not find a company that manufactured them in India. However, after some searching, when he did find one from America, he realised it was a shoddy job. Moreover, the piece got lost midway in transit, and Akshay lost a lot of money in the process.

He didn’t give up though, and started making a propeller in his own backyard. After buying a random piece of wood, he started working on it for a few months everyday before going to work..

The piece, when finished, looked very basic but did manage to catch the attention of visitors to Akshay’s home.

Between 2015 and 2017, Akshay, inspired by people’s interest, started making these propellers as a hobby for several individuals.

When he was convinced of the business opportunity in the space, and found several takers for these propellers, he launched ﻿WoodFeather﻿ in early 2017.

Akshay says there is no particular skill set necessary to do this kind of work. In the initial years, he would spend his weekends visiting craftsmen, and learning more about wood work while running his marketing consultancy, Dot Dot Dot, on weekdays.

He says, “Aviation decor is not big in India. Naval decor still has some prominence, but owning private jets or aviation artifacts is something India is not big on.”

Akshay recalls some humorous yet frustrating times when he would set up stalls at exhibitions and people would often mistake the propellers for a ceiling fan. “I can't blame people because there has been no exposure. So the vision to create aviation decor as a category has been a challenge, and will be for a while,” he says matter-of-factly.

The propellers are of different heights ranging from six foot to eight. Akshay says he is the main designer as he has a penchant for design and enjoys the craft. Moreover, propellers created by WoodFeather are inspired by a wide range of things from sports, mythology, people, planes, characters, superheroes etc.

Explaining the difference between the two, Akshay says, the former looks vintage, old-school, and rustic whereas the latter one is modern, funky and has a more vibrant look-and-feel.

The luxury aviation boutique at the moment offers about 17-18 designs priced between Rs 40,000 to Rs 1.5 lakh.

The Gladiator, Akshay says, is the most sold out piece from the Classic collection which is made from a mix of wood and brass. It is priced at Rs 65,000.

Akshays says they use wood such as Burmese teakwood, teakwood, mahogany, birch, maple, (all locally sourced) to manufacture the propellers in the company’s four units in Mumbai. The pieces are completely hand-crafted and not mechanised at all.

WoodFeather, at the moment, sells only through its website. It is not available in any retail stores or ecommerce platforms. The reason being that Akshay wants to retain the exclusivity of the brand. He explains,

“It was a conscious decision I made to be conservative, and not go mainstream. We don’t want propellers made by us to be a piece which can be put into a cart.”

He says that discovery has an indispensable charm.

Akshay says he is not worried about scaling up but serving the product to the right people. “As a luxury brand, one of the things I have realised is that word-of-mouth does the best kind of marketing and discounting is the worst thing you can do to your brand.”

Customers of WoodFeather include some well-known people like Vijay Kirloskar, Gauri Khan, Shankar Mahadevan, Niranjan Hiranandani, Kris Gethin and many more. He doesn’t reveal the turnover but adds that the company has produced and sold more than 1000 propellers.

Partnering with the ‘top guns’ of Hollywood

The coronavirus pandemic, which brought the world to a standstill, brought both good and bad news for the company. The company was shut for about six months owing to the lockdown and also because Mumbai was a hotspot with the largest number of coronavirus cases in the country. Akshay, at one point, felt that the survival of this luxury brand was at stake because there were people who were struggling for basic amenities, and the idea of luxury was far-fetched.

After six months, when the city started unlocking, the business retained its workers and started operating again.

In June, Akshay bagged a deal with American film production and distribution company, Paramount Pictures, to come up with an exclusive range of merchandise in the wake of the Tom Cruise-starrer -Top Gun: Maverick- which is slated for a June 2021 release.

The iconic Top Gun movie is popular across the world even among the non-aviation segment of people.

Going forward, Akshay plans to devote his energies to perfecting the product. The propellers remain the core and DNA of the company. He is not thinking very seriously about diversifying but says he may come up with a stool and table top range as well in the same category.